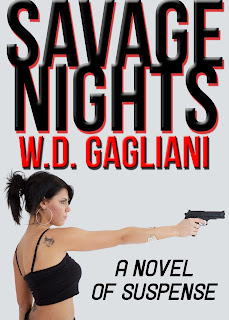 “This book starts right off looking like a high-voltage suspenseful read… [and] a big bang-up finish worthy of the big screen. W.D Gagliani writes with an almost stream of consciousness style of prose that pulled me right into the story. The characters are living, breathing masses of contradiction. The plotting is exceptional. The action is non-stop. Picture this. If Sam Peckinpah wrote a novel, how would it read? Probably like this one… Read it and hold on tight.”
—Debbi Mack, author of Five Uneasy Pieces, Identity Crisis, and Least Wanted

"Savage Nights is, in a word, intense! ... The action in this book is incredible. As I got closer to the pinnacle of the plot, it was as if I could not read fast enough. My eyes flew across the words, hungry for what would happen next. I was surprised at some of the twists and turns, and when the story was over, I was exhausted. It was that intense."
—Tiffany Harkleroad, Tiffany's Bookshelf (blog)

"I truly enjoyed it and the pages kept turning... the suspense grew, the shocks had real jolt, and the big scenes were big and satisfying...better than (David) Morrell!"
—Brian Pinkerton, author of Abducted and Vengeance

W.D. Gagliani is the author of Wolf's Trap, Wolf's Gambit, Wolf's Bluff, Wolf's Edge (2011), all from Leisure Books. All available on Amazon Kindle and other e-formats. Gagliani is a member of the Horror Writers Association (HWA), the International Thriller Writers (ITW), and the Authors Guild.

Praise for W.D. Gagliani’s other novels…

"Part horror tale, part crime novel, this is first-rate entertainment that will keep you reading deep into the moonlit night."
—Tom Piccirilli, author of Headstone City, The Dead Letters, The Midnight Road, and The Coldest Mile

“Wolf’s Trap kept me on the edge of my seat from start to finish. Usually more of a paranormal romance reader, I found it very easy to stay focused on this book and allow its complexity to drown out the rest of my world and escape with this thrilling ride. The characters were intense and at times downright frightening, but they definitely kept me within their thrall throughout their chase.”
—Bitten By Books (www.bittenbybooks.com)

"A great big bloody beast of a book that enthralls the reader on multiple levels. Vicious, gory, sexy, fascinating--part-supernatural thriller, part-police procedural, pure dynamite!"
—Edward Lee, author of City Infernal, Brides of the Impaler, The Black Train, and The Golem

"... a real nail-biter of a werewolf book. Absolutely first rate!"
—Jonathan Maberry, author of The Wolfman, Zombie CSU, The Dragon Factory, and They Bite

“Wow…Wolf’s Gambit will knock your socks off… I was really impressed with the skill that Mr. Gagliani wove so many characters together and convincingly gave them all a finished storyline without leaving a lot of unnecessary loose threads.”
—Bitten By Books (www.bittenbybooks.com)

"Gagliani once more proves that werewolves are scary as hell. The book is fast, vicious and thoroughly satisfying."
—Jonathan Maberry, Bram Stoker Award-winning author of The Wolfman, Patient Zero, and Rot and Ruin

"Wolf's Bluff is creepy, sexy, fast-paced, and brimming with humanity; just what I expected from a writer of Gagliani's caliber."
—Gary A. Braunbeck, Bram Stoker Award-winning author of Coffin County, Far Dark Fields, and To Each Their Darkness

“The third offering in the Wolf’s Cycle series by W. D. Gagliani is the most horrific and thrilling of the trio… Wow, I don’t know where to start with this one. The thrill factor, horror content and suspense was top notch. I truly was on edge from the first glimpse of our hero as the storyline gripped and pulled me through a myriad of emotions.”
—Bitten By Books (www.bittenbybooks.com)

Savage Nights By W.D. Gagliani If you liked the movie "Taken," let Savage Nights take you much, much farther into the darkness.... It's a tough, pulls-no-punches, noir thriller that's not for the faint of heart. Rick Brant is a Vietnam veteran tormented by his past, his secrets, and his inconsistent and unreliable psychic ability. When his beloved 19-year old niece, Kit, is kidnapped from a busy mall, he is forced to use his old connections and his skills. Hard-nosed inquiries suggest that Kit has been snatched for auction by an international sexual slavery ring. Brant reconnects with his Vietnam buddies, some of them ex-cops, to help him pry Kit from the clutches of the ruthless Goran ("the Serb") and his gang. The Serb's daughter, Irina, is also a key to finding Kit, whose ultimate destination may be a modern harem, a brothel, a dungeon, or one of the Serb's kinky slavery clubs. Or worse. As the horror of Kit's captivity increases daily, Brant becomes rescuer, avenging angel – and executioner. In his quest, he may just find redemption for his own past sins. Includes bonus material: excerpts from horror thrillers by W.D. Gagliani, John Everson, and Scott Nicholson, and a complete crime short story by David Benton and W.D. Gagliani (preview of the upcoming Benton & Gagliani collection Mysteries & Mayhem).

The jungle canopy spreads out over them like a leafy umbrella. Its sounds have stilled to occasional raucous cries that give each of them pause as they stand circling the hole, their fingers tight against the triggers of their rifles. There is Sarge, his thick eyebrows knotted over roving red-rimmed eyes. There is Smitty and Packey, standing guard against whatever might come crawling from the hole or stumble out of the jungle's darkness. The others form a small, nervous ring of guns and sweat in various poses.

No one is more covered in sweat than he, and he feels the sheen on his skin soak his clothing all over again. He sets down the black rifle and pack and strips off his web belt. From the pack's loose flap he withdraws a Colt .38 snub-nose revolver and checks the cylinder.

Sweat droplets gather on his chin and dribble in a line to his chest, where the olive drab fabric has turned black. His hand shakes as he methodically inserts six fat cartridges

into the Smith's cylinder. The brass slips between his damp fingers but he gently seats each round in its nacelle and snaps the cylinder shut. Full. Six rounds.

"Loot," drawls Sarge. "Let me lob a couple grenades in there. We got plenty."

"You know that's not good enough, Sarge. Grenades don't do shit in Charlie's tunnels. There's only one way to flush 'im, and that's this old fashioned way. Keep an eye out for other exits, and don't shoot my fuckin' head off if I come squirtin' back."

"’Kay. Smitty, Digger, fan out and watch for moving bushes."

Sarge pulls back the bolt of his M-16 and lets it snap quietly forward. The others follow suit.

Loot — Lieutenant Richard Brant — shrugs out of his pack and extra gear, unsnaps his webbed belt and holster, and taps both boot knives down so they can't slide out on their own.

He checks the opening carefully. Charlie's been known to booby-trap everything. Coke cans. C-ration tins. Fallen logs. Trapdoors are a likely booby trap, but Loot traces the edge with a finger and senses this one's clear. He can't see any wires, there's no sign of a hasty set-up or glob of plastique. His sweat trickles into his eyes and he blinks hard. Charlie might be crouching just on the other side of the square door, AK in hand, bayonet fixed, ready to make a suicide strike on the first GI to face him. Maybe there's a squad past the second trapdoor, or maybe there's a hollowed out side chamber behind which Charlie lies, clutching a spear and just waiting for a pink-skinned target to ease into the square hole. Maybe—

Loot senses he's psyched himself out. If he had just opened the trapdoor and climbed in, it would have been fine. But instead he started to play the scenarios in his head. Remembering other holes, other tunnels. He squirms as if the giant spiders were crawling on him again, as in the last tunnel, yesterday, the one that nearly reduced him to tears. He cocks the trigger of the Smith, quietly.

"Fuck this," he mutters under his breath and in one swift motion he pushes the trapdoor into the hole with one hand and reaches into the darkness with the .38 ahead of himself.

The blast blinds him and the pain is an intense lance to the brain and heart, and then to his hands. He sees his bloody hands writhing on the tunnel's dirt floor, one still gripping the pistol, and he screams long and hard even as he realizes that the blast wasn't all, the booby-trap wired to the back of the trapdoor also includes a small container of home-made napalm, and then he blacks out, his eyeballs melting into the skin of his face and his lips liquefying over his teeth like runny glue. His scream turns to a gurgle and then it's blessed nightfall—

—blessed cool nightfall and his eyes blast open but there's no light (yes there is, there it is, the nightlight) and he realizes that he can see after all and his skin feels rough but it's all there and his hands are, where are his hands? In front of his eyes, twitching and clenching, but most certainly still attached to his wrists. He can feel the pain in his wrists, but it's not his pain, it's someone else's.

Fuck, it's Strachowski. That's what happened to him. Not me.

He remembered Strach's ravaged face, the blood, the stench. Then, for a second, Strach's face seemed to morph into someone else's. A girl's.

He shook his head violently to erase the image.