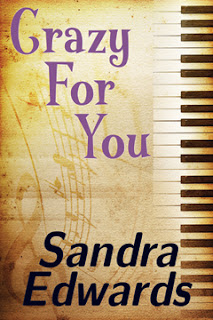 Book Title:
Crazy for You

Crazy For You is a rags to riches tale set against the backdrop of the '80s, movie stars and rock-n-roll.

Roxanne Simon is a successful author and an award-winning actress who’s also a bit neurotic. After she appears on a popular talk show the world is left guessing: is rock star Frank Garrett the father of her four year old son?

Once Frank learns the true parentage of Roxanne's son, he's determined to make her pay. When he stumbles upon her weakness, he decides to use it against her. But is he prepared to see her pay the ultimate price in his quest for revenge?

Be careful what you wish for...you just might get it.

"The novel is like watching an '80s soap opera like Dallas or Dynasty."
—A Top Pick from The Romance Reviews

"Sandra Edwards is definitely a favourite author of mine, she delivers fantastic story lines that keep you hooked."
—The Crazy Bookworm

Book Excerpt from Crazy for You:

Candy was bikini-clad and laid out in a poolside lounge chair, soaking up the sun. The tropical heat washed over Roxanne in a thick wave of sweltering moisture as she dropped into a nearby chair. She’d nearly forgotten how uncomfortable Florida’s humidity could be. She wondered if Candy was asleep and cleared her throat.

Candy’s eyes opened behind her Sun Clouds. After a moment, she asked, “How’d the interview go?”

An unpleasant feeling devoured Roxanne. Reluctantly, she admitted, “Not well.”

“All she wanted to talk about was Garrett-Hollander.” Roxanne tried to show as little emotion as possible, even to Candy.

Candy tipped her sunglasses up and propped them her forehead. “That was the subject?”

In the background, one of Garrett-Hollander’s songs poured from the radio sitting on the ground at Candy’s side. Since Roxanne’s unexplained disappearance from Frank’s life five years ago, he’d written many songs about her. Some indicated his hatred for her, while others simply begged her to come back. There were also songs alleging that she’d been a hooker. It was one of those songs that played on Candy’s radio now.

…I played the fool

But she let me down

Cause while I was away

Roxanne was out selling herself

All over town…
“I’m surprised she didn’t ask me about that damn song.” Roxanne hated that song and she cursed Frank for writing it. To hear him tell it, she’d been out prostituting herself just because she could. It hadn’t been that way at all and it pissed her off that Frank would suggest as much.

“So tell me what happened?” Candy flashed Roxanne an eager smile. She loved gossip. Especially when it involved the two of them.

“Well, to make a long story short—” Roxanne hesitated. “She asked me point blank if Frank Garrett was the father of my son.”

“No...” Candy’s disbelief lit in her emerald eyes, brightening them. “What’d you say?”

“Well, I denied it of course, but the bitch wouldn’t give up.” She paused long enough to get a hold on her frustration. “She even conned me into bringing Frankie out on the set.”

“Oh, yes. And she commented on the resemblance too.” Roxanne reacted like an injured puppy. “And she wasn’t talking about me and Frankie.”

“If he sees that show…” Roxanne’s voice trailed off as she thought about Frank. Quickly though, she regained her composure and added, “I hate to think of the consequences.”

“Frank’s in his own little world,” Candy said. “The last thing he’s got time for is to keep up with you.”

Candy didn’t speak right away. The silence was deafening. “Did you know their first album was a flop?” she asked, but didn’t wait for an answer. “When their second album came out, it did so well that people went out and bought the first one too.”

Candy raked an admonishing glare over Roxanne. “They have three, which is my point exactly,” she said, as if she knew Roxanne had chosen to play dumb. Uh oh. That meant the lecture was coming. “It hasn’t been your concern to keep up with him, so why should he have gone to so much trouble to keep up with you?”

“Okay, so maybe you’re right.” Roxanne wasn’t quite ready to give up the fight. “But if what you say is true…then why do you know so much about them?”

Candy ignored her question. “You do have reason to be concerned, though.”

“If Frank does see that show...you’re dead meat.” She slid her sunglasses down over her eyes and sank back into the lounge chair.

“That’s very comforting Can…” Roxanne’s voice trailed off. She didn’t want to think about what might happen. Nothing good could come from that.

“Face the facts,” Candy said, “Frankie is a walking, talking replica of Frank, you know.” Her undesirable words surrounded Roxanne like a fine mist. “I know you had your reasons for running away from him.” Compassion filled her tone, yet if offered little comfort. “But you better realize…it might be time to pay the piper.”