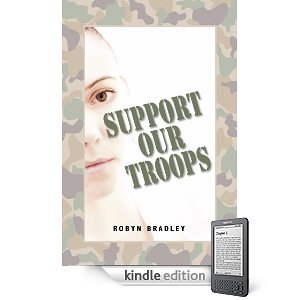 Support Our Troops – A Short Story

“Bradley's writing is crisp and well-paced. The conflict unfolds quickly and the reader can readily identify with the worn familiarity of a polarized relationship. She explores the complexities of ideological patriotism contrasted with the shock and adjustment of a woman forced to care for an amputee veteran. Interweaving themes of spouse abuse and taboo sexual desire, it is a riveting story that makes us want to read more.”
—PFin, Amazon Reviewer, 5 stars out of 5 stars

“Okay, so this is not a feel good story. It's provocative, sort of claustrophobic, but you'll race right through it in a hard-to-look-away-kind-of-a-way. I think that's really the point; when you pull back the curtain and peer inside people's lives it IS uncomfortable, too intimate—you find out stuff you probably wish you hadn't. Robyn has a real talent for building up a story, compelling your attention, and bringing it crashing down on you…I would not have guessed this is where it was going to land.”
—Jconnon, Amazon Reviewer, 5 stars out of 5 stars

When Koty's husband volunteers her to visit Jamie, a quadruple amputee who lost his limbs while serving in Iraq, neither Koty nor Jamie is happy. Jamie resents being "babysat" every day. Koty resents her lot in life: almost 30, mother of four, married to an abusive alcoholic. But in one pivotal moment that brings Koty and Jamie together in a sexually-charged situation, all that changes.

Book Excerpt from Support Our Troops – A Short Story:

Koty, you could talk the balls off a brass monkey. When Wayne first said these words to me, they were wrapped in a chuckle and a whole lot of warmth, pillow talk after making love back when I'd barely graduated into womanhood. I'd giggle and go right on talking, even though I didn't have a clue what a brass monkey was. Today, after a decade-plus of marriage, he still uses that phrase to describe me, usually to one of his cronies: "Jesus, that woman could talk the balls off a brass monkey," but it's delivered with a combination of loathing and derision. Thing is, it's inaccurate. I stopped talking to him a long time ago. He just hasn't noticed.

What Wayne does notice—or thinks he notices—is patriotism, or people's lack of it. The more the television says that most Americans favor our getting out of Iraq, the more yellow ribbons I'll find tied around the trees in our front yard. I've stopped explaining my side: that we entered this war based on lies, that too many of our men and women are dying with no end in sight, that it's another Vietnam. I was surprised the time he let me get out all these thoughts in one breath while waiting for the inevitable brass monkey crack. Instead, he stared at me in a way that made me wonder if I'd somehow broken through to the old Wayne, the decent young man I'd fallen in love with when I was just a kid. The expression on his face was something I hadn't seen before. But then he spat two words—F*cking idiot—and I realized what the look really was: hatred.

So Wayne and I don't talk about this war or his ultra right-wing leanings or anything at all, really. I'd been able to take solace in the fact that even in our somewhat conservative New Hampshire town more and more people were defecting to my side. Problem is, now the tide's turning, in Wayne's favor, and all because of this soldier boy from Iraq,  Jamie Wigglesworth, a hometown favorite who no one gave a rat's ass about, I'm sure, until he lost both arms and both legs to an IED. Suddenly, patriotism has been given a second life in the form of parades and rallies and "Support Our Troops" bumper stickers. Wayne and his buddies organized a fundraiser on Jamie's behalf and used the money to fix his home with a wheelchair ramp, widened doorframes, and one handicap john. The leftover money is for nursing services until Jamie gets back on his "feet," which, apparently, he's refusing to do, preferring to sit in his wheelchair and stare out the window. Wayne tells me this over dinner.