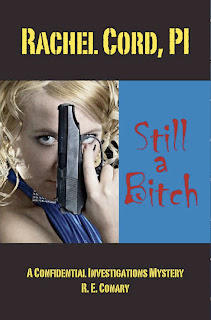 Rachel Cord returns with a vengeance chasing multiple threads through a labyrinth of missing persons, buried bodies, kinky sex, new love, and an ex-lover who may be a serial killer. Threads that threaten to bind Rachel within a tight cord preventing her from getting the answers she needs and saving the woman she loves.

Once the convenience store clerk stopped staring at my breasts, he recognized the man in the picture.

“Yeah, that’s Mr. Carter. I see him with Mr. Stanley lots of weekends. They come in for gas and stuff. They usually order pizza on Saturday nights. A large double pepperoni, double cheese with hot peppers and onions. Not from here. I deliver for Pizza Quick at night. They’re good tippers.”

“Did you deliver a pizza last Saturday?”

He pulled his eyes back from staring at my breasts again. He was young, so I tried to ignore it. It happens all the time.

“No, they didn’t call in an order. Didn’t see them at all last weekend.”

He gave me directions to Stanley’s house and I thanked him. He strained over the counter to get a last look as I got into my car. I understood his interest. Every adolescent male from nine to 90 stares at my breasts. A lot of women do too, but that’s a different story. I hate it, it’s my albatross and there’s little I can do about it—yet.

My breasts are huge. Double-H huge that stick out like the bullet bumpers on a fifties Buick. They’re a cause of distraction, but more than that they’re a pain: a pain in the neck and back just trying to stay upright, and a pain to the ego. It's automatically assumed that the bigger the breast the smaller the brain. But one of these days I’m getting them cut back to a pleasanter, more comfortable size: a C-cup at least, or, maybe a B. A girl has her dreams.

The mailbox was just as the clerk described, large and black with three blue reflectors on the post beneath it. I pulled into the dirt lane and stopped.

It rained heavily the past weekend washing the lane smooth. It didn’t look like anyone had been here since. There were no tire tracks. This was Wednesday. Morning light through the trees turned the lane green as it twisted and curved through the woods. I couldn’t see the house. I got out of the car and checked the mailbox. There were some letters and a magazine. One day’s delivery? Three? What time of day? I had no idea. Only one of the letters had a readable cancellation from last week. No help there. I left them. It's against the law to tamper with other people's mail. I try not to break the law—too often.

The rain-swept lane told me Jerome Carter probably wasn’t even here, or Kenneth Stanley either. Maybe they went fishing and hadn’t yet returned. Maybe they had an accident. But they weren't in any hospital that I knew of, nor had any unclaimed bodies shown up. This could be a wasted trip. Still, I couldn’t know for sure until I checked. Carter hadn’t come home Sunday night and this is where his trail led.

Why was I here? Because I was hired to find the guy and hand him some papers? Because it’s what I do for a living? Because I'm Rachel Cord, confidential investigator? Was that answer enough?

I didn’t want to be here. Certainly wasn’t welcome on this side of the river. I could have stayed in bed. Should have stayed in bed. Had plenty of reason to stay in bed and would be much happier there than here. I definitely didn’t want to go down a tree-lined lane to a house hidden in the woods. Nasty things happen in such places. Nasty things that rip you apart, maybe never to be whole again. Nasty memories that didn't need to be dredged up.

Life isn’t always hearts and flowers. Mostly it's pain and suffering. Muck and mire below the surface where the grubs and worms feed. It’s an end and it’s a beginning. It’s dirty little secrets. Secrets that it’s my job to discover, like it or not. My business cards even say so: "Life’s a bitch. So am I.”

Yeah, that's why I was here: to prove to myself I can still handle it; that I’m still tough enough, hard enough.

I started down the shimmering lane. Angled golden light pierced the green canopy sending up hazy mists that promised another hot, sticky, typical September start. The lane twisted around trees like a game trail instead of a driveway built by humans. The quiet crunch of tires on sand sent birds flittering and squirrels scurrying. The lane curved and as I crossed a short wooden bridge over a stream, I saw the log house at the crest of the hill across an open meadow. The meadow was wavy grasses and wildflower bursts of white and yellow, reds and blues. The colors extended up the hill toward the house, a modified A-frame with wings. A two-and-a-half story triangle of windows reflected blue sky.

The lane circled the meadow instead of cutting across straight to the house. There was a low place where the lane turned that still had water from the recent rains and looked pretty soft. No one had tried to drive through it or around it. I pulled to the left through the grasses to avoid getting stuck. Something scraped the undercarriage. The lane curved up the rise and I could see the side of the house, towering trees shading the back yard, and a log garage. The weathered gray logs shone in the sunlight. Beyond was more meadow with an old red barn and then the tree line. I stopped near the back of the house. A dark blue car parked in front of the garage was a late model Cutlass and the license plate matched the information I had. I took the envelope of papers from the passenger seat and got out.

A tawny tabby came from beneath the deck to greet me. She meowed and rubbed herself against my leg. She leaned in hard as I rubbed her ears.

“You’re a friendly kitty. Where is everyone?”