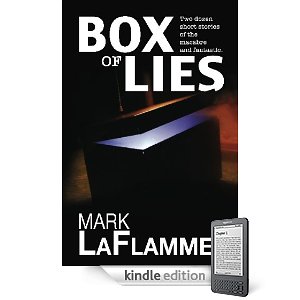 "Mark LaFlamme is one of only a handful of horror writers who are comfortable telling his macabre tales from inside the belly of the beast.”
—David Griffiths, Twin City Times

"LaFlamme is like a graffiti artist sliding around a corner in the dark with his collar turned up, a few bold strokes and he's moved on—but the territory of your mind has been tagged with his distinctive images.

“One thing you know for sure is that, whether you're reading about a band of murdering fourth-graders, a shopkeeper defending his territory after the apocalyse, or a man who made a very poor bargain for eternal life, the characters are so real you can reach out and touch them, if you only dare.”
—Linda Bulger, Amazon

“There are big stories here, neatly packaged in tiny little boxes. Go ahead, just start with one or two. But trust me, once you open the first box, the first story, take the first bite. You're not going to want to stop.”
—Lauren Zito, Francis Rocks! Production

"Don't start this book if you have to go to work tomorrow. #1: You won't be able to put it down. You're going to have to read the whole thing. It's a page turner. #2: Once you finish it you're going to spend hours going over the plots and characters—so don't even try to get your normal sleep. Unless your normal sleep is full of nightmares. LaFlamme's images and characters will pop up over and over, scaring you again and again."
—Meredith Kendall, author of Reiki Nurse

“Mark LaFlamme belongs right up there with the masters of horror: KING, KOONTZ, SAUL, JACKSON, and all the rest!”
—Betty Dravis, author of 1106 Grand Boulevard

"I could not put the book down. If you Like Stephen King you'll LOVE Mark."
—Robin Graziano, Amazon

Discover a place where men and women are forced to march for their daily bread, the end of the world doesn’t guarantee a way out and every tiny decision that you make could influence the future in giant ways.

From Maine author Mark LaFlamme, 27 disturbing tales that question the world around us, each more unsettling than the last.

A professor discovers that we all may be works of fiction. A freak storm leaves half the population speaking gibberish and the grandest secrets of them all may await in the grave.

Table for One
Pepper
The Bender Argument
Dove
Dead Things
Confessional
Knick Knack
Feast of Friends
The Neighborhood
The Whole Shebang
Find a Penny
Artifact
The Village Store at the End of the World
Honey
Wish You Were Here
Bone Lake
Box of Lies
Daddy
Out There
Gibberish
Our House
Forever
Bobby
Legend
Dual Sport: A Love Story
Fingerdance
The End

Book Excerpt from Box of Lies:

Imagine a world where men and women are forced to march for their daily bread. Welcome to “The Neighborhood”
from the short story collection

www.marklaflamme.com
A stench hung over the city but as usual, the walkers filled the streets. Most walked alone, some were in pairs. There were thousands of them and they walked in all directions, wherever there were avenues to accommodate them. The surface beneath their tired feet was spongy rather than hard. Each step they took was a contribution. Each step was tracked carefully.

Ian Sharp walked grimly along the busiest avenue, feet red hot bricks of pain. It was early evening and that meant the government-issue shoes upon his feet were not his own. There were three people in all the world that knew this. One of those people was presently gagging and cursing beside him.

“It’s unbelievable. I keep thinking it can’t get any worse and it always does. What the hell do you suppose they’re burning these days?”

It was Hank Buck, who coughed and swore more for dramatic emphasis than anything else.

Ian stared straight ahead at a landscape of gray buildings and smokestacks breathing foulness into the sky. There were too many smokestacks to count. Every building, whether tall or squat, was gray. Most were former office buildings or condominiums. They had been gutted and divided and then divided some more. Every spare corner had been converted into wee compartments to house the wretched inhabitants of the neighborhood as efficiently as possible.

“Could be cat,” Ian said, teeth gritted against the pain in his feet. “When’s the last time you saw a cat around here?”

Buck turned to look at him, still walking. He was a stocky man with a bald head. He wore a ragged plaid jacket, government issue blue, just like the one Ian wore to protect him from the chill.

“Cat! What the hell can you get from a cat? Not enough blubber on ‘em. You could burn a million cats and they wouldn’t produce no energy.”

Nonetheless, Buck began looking around in all directions, scanning the sooty alleys, peering between groups of walkers on either side. There were no cats in sight.

Ian didn’t believe the refineries were burning cats, although it was not an entirely fanciful notion. Ten years ago, there were dogs in the neighborhood. Now there were none.

In a nation starved for resources, almost everything imaginable had been baked, boiled or burned in an attempt to tease energy out of it. But the only constant source was the walkers themselves. Each step produced a paltry tenth of a watt. But there were 250,000 of them in this neighborhood alone, and each walked a minimum of nine miles a day.

Or lost all rights to food, water and protection and risked being sent off to the camps where they would be forced to contribute to the energy appetite in others ways.

They walked. Ian tried to imagine a day when these avenues were paved streets buzzing with cars and buses and motorcycles. He was too young to remember it, but he had heard the stories. He found the idea of it, all the buzzing velocity and noise, more frightening than anything else.

They passed a couple holding hands. They were a young pair, perhaps 25, but each looked tired to the point of collapse. Everyone in the neighborhood worked 50 hours a week at a federal job. They squeezed in their nine miles before or after.

More miles, if you happened to be pulling double time.

“How are your feet?” Buck asked, voice dropping a few octaves.

Ian nodded. A-okay, he meant to imply. They both knew it was a lie.

They walked. They passed a federal store where groups of men and women stepped off the avenue to pick up their allotments of gritty water, slimy meat and perhaps a few bananas, if there were any for the taking. Like most buildings in the neighborhood, the store was a concrete square with a simple door and a few unadorned windows. Above the door was a billboard that read:

STEP INTO YOUR FUTURE: HAVE YOU WALKED YOUR MILES TODAY? The message was set over the image of a couple and two children, seen from behind, stepping from an avenue and into a dirt yard before a tiny house.

“How’s Samantha?” Buck asked. He was blowing on his hands.

Ian winced. Hearing her name somehow intensified the throbbing in his feet. He thought of her at home in the cold, dreary apartment, walking on that stupid treadmill when she should be resting. He could see her face, that beautiful round face contorted with pain and stubbornness, utterly defying the sickness.

“Better,” he said. “Maybe better. Not well enough to be out here.”

Buck looked at him. Ian could feel it. He tried to concentrate on the stench, a nasty smell he associated with burning hair. What were they burning these days?

“You’re going to kill yourself,” Buck said in the flat tone of one who believes every word that leaves his mouth. “I don’t care how tough you are, cramming your feet into size sevens and hiking nine miles will either kill you or get you caught. Sooner or later, you’ll come across an uptight Uncle who asks for more than your name.”

“I’ll deal with it when it happens,” Ian said.

They were passing another federal store. It looked the same as the last one, although the billboard above the door was different. This one stated: JUST WALK AWAY: REMEMBER, DEALING WITH THE UNDERGROUND MEANS DEATH.

They both looked at it. They kept walking. Beside them, a fat man was bent over, wheezing and coughing. Ian could hear the phlegm rolling in the fat man’s throat. A pretty girl, perhaps a daughter, stood over him and slapped at his back.

“You ain’t fine,” Buck said when they were past them. “You think you’re going to walk yourself right out of the neighborhood, but you’ll be on stumps by the time you do it.”

Closer than you think, Ian thought.