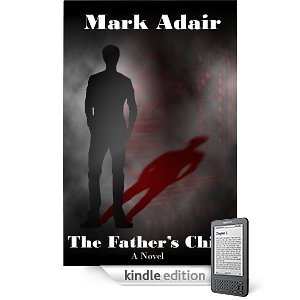 “It had me on the edge of my seat from the very first page until the end, and the twists and turns had my mind reeling well after! If you're a fan of suspense and just plain good writing, I highly recommend this book!”

“Mark Adair's The Father's Child is a roller coaster, bungee jump, and treasure hunt all rolled into one!”

“Adair is a master at witty dialogs, artful descriptions and teasing the reader with seeds of fore-shadowing. The story is filled with twists and turns, and fun surprises from beginning to end; a masterful plot that continues to develop all the way to an exciting and unexpected conclusion.”

“Buckle up, fire up your Kindle, and enjoy the ride!“

“The protagonists, John, Paul, Susan and Julia will take you on a mental adventure into a techno and psychological sub-culture that I found both exciting and mind bending.”

“Adair has a knack for moving the story forward at a fast clip using both inner and outer dialogue. His characters are well defined, and fiercely contemporary...”

“Adair provides his readers and his characters plenty of challenges, astonishing surprises and paradigm shifts that will blow your mind.”

“It's a good read, a page turner, a thrilling ride and it's well written.”

“I highly recommend The Father's Child—get it, read it, you'll be glad you did.”

“An unexpected event propels the college companions on a thrilling journey filled with suspense, mystery and high-tech adrenaline.”

John Truman, a bright, introverted, college student belongs to the New Dawn...he just doesn't know it yet. The 300-year-old, Oxford-based, secret society designed him, created him, and built their organization to interface with him. They cannot survive without him; he cannot survive without them. All he wants is to get through today; all they want...is to rule the world.

Book Excerpt from The Father's Child:

I retreated to the safety of my room. I would join the party later, but for now I used my latest software project as an excuse to delay the inevitable. Taking a break from my work, I quickly tossed down two Jack-and-Cokes, more Jack than coke, trying to muster up the courage to make my entrance.

The silver plasma TV hanging on the wall caught my attention when the headline running at the bottom of the screen stated, “As we reported last week, the Federal Reserve Board chairman was found dead from a heart attack in his D.C. condominium. The President, with the consent of Congress, has moved swiftly to appoint and announce his relatively unknown replacement, Jack Timothy. The President pointed out that Mr. Timothy’s experience, Federal Reserve Board of Governors for the last twelve years, along with his impressive Oxford background were primary factors in coming to his decision. Mr. Timothy’s comments were brief, stating simply, ‘Our world is on the brink of an economic new dawn. I look forward to my role as chairman. I want to say thank you to the President for the confidence he has placed in me.’”

If I timed it just right, a few drinks interspersed with a toke here and there could drown out my inhibitions as well as stave off the nagging daymares that forced their way into my mind. Unfortunately, in all the nervous anticipation I had missed that tiny window of opportunity. Sitting there with drink number two in hand, I could sense my thoughts scrambling, deteriorating. Oh shit. I hate this. My mental grip slipped as I once again lost the struggle to resist the latest onset of the recurring vision:

Four men, one whom I thought I should know but couldn’t remember, gathered around a small table in a dark corner of a small room. Their voices soft, almost hypnotic, spoke Latin with English or possibly Scottish accents. They discussed economic systems, political structures, social causes, theological constructs, and people groups as if they were simply pawns on a chess board. At some point in the complex, and occasionally inaudible, conversation the words Necessitas non habet legem would rise above the others, triggering a morbid and sickening reaction in me – I wanted to throw up. I would try to look away, but the more I resisted, the stronger those words held me in their grasp and the further into the room they drew me. Finally, they would look up at me, vacant, zombie-like expressions in their eyes, point to the empty chair, and say, ‘Welcome.’”

The vision ended and, as usual, my transition to unpleasant physical manifestations began. First the cold sweats followed almost immediately by piercing pain that seemed to dance around in my skull – base of my cranium, behind my eyes, top of my head, nasal cavity, inside my ears, and then start all over again. Like every other time, the experience culminated in a single drop of dark red blood falling from my nose.

Ten minutes later the physical manifestations completely subsided. These episodes started when I reached puberty. After an embarrassing eighth grade incident involving my presentation on the roots of Latin and the drop of blood spilling onto the white, tile floor, I learned to detect the early symptoms and avoid further public humiliation.

A few minutes more and the joint began to have the promised effect. A nice relaxing buzz filled my head as I made my way back across the hallway and positioned myself, once again, at the top of the stairs overlooking the front room.

The party proceeded according to script. Everything necessary for the perfect evening planned and in place - cool people, cool band, cool drugs, all gathered together in a cool place. I was even beginning to feel cool…sort of.

I can do this. I inhaled a slow, deep breath, and exhaled with force and a new determination to join the fun. I had won the battle and I willed my right foot, attired in blue Converse, to take the first step – shaky, but so far, so good. Now, the left one, the right one, the left one…oh shit, I need to sit down.