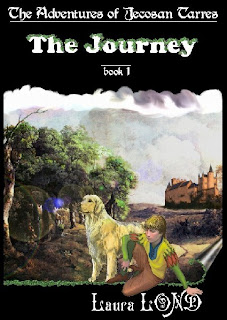 "The Journey by Laura Lond is a superbly written novel with strong moral values which is suitable for readers as young as ten, yet deliberately written to appeal to readers of all ages."
—Midwest Book Review

"This opening gamut of The Adventures of Jecosan Tarres is a fantastic coming of age fantasy starring a young hero who believes in himself and his cause."
—Harriet Klausner, Amazon's #1 reviewer.

A story of faith, friendship, courage, and staying true to your calling.

His father killed in war before he was three, his mother unexpectedly dying when he was eight, Jecosan Tarres is young and poor, yet he has something not many men have: a faithful heart, a strong spirit, and the knowledge of truth taught to him by his mother and the priest Shaledan. Alone for a year, but later befriended by a blacksmith, Dalian, he has already beaten the odds of being destitute and forgotten, but clearly something or someone is at work in his life. With his faithful dog Gart and his friend Dalian, he sets out on a life defining journey after a messenger visits him with a commission to go to Kanavar, the ancient capital of Meoria, where he is to enter the king's service and somehow prevent the war that is about to break out in his country. There are powerful forces interested in his journey, both to fail and succeed. Join young Jecosan as he struggles along, escaping sudden traps, facing prison and captivity, fighting pain and despair, losing and making friends.

...This time, the sense of someone’s invisible presence was so strong that Jeco could even tell where it was coming from. Its source was over there, in the dark corner right in front of him where stood the old wooden chest with a broken lock.

Gart looked that direction and made a slight movement with his tail.

The dog glanced at him, somewhat surprised, and turned his head back to the corner, wagging his tail faster. Jeco put down the book. Suddenly, the dark corner in front of him was illuminated with a soft light. Pure white radiance coming from nowhere was getting stronger and brighter; Jeco couldn’t help holding out his hand to shield himself, although the powerful light was at the same time very gentle and did not hurt the eyes.

It was an awesome, breathtaking sight. The burst of white light just stood there, shining gloriously yet not flooding the whole attic, its contours distinct. Already nearly impossible to bear, it was still growing stronger, at the same time somewhat condensing, thickening in the middle. Jeco first thought his eyes were playing tricks on him, but the more he looked the clearer he saw that dense spot in the very center of the glowing cloud. The spot pulsated and throbbed, changing beautifully, until it formed a human-like shape.

”An elgur!” Jeco gasped in disbelief.

Become a Kindle Author sponsor.
Posted by kucinx at 11:53 PM