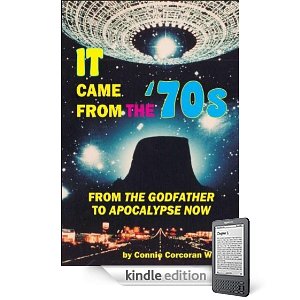 It Came from the '70s is he book movie buffs old and new have been searching for, not only as a good read but as a reference tool. Most of the 50 short reviews were written and appeared in the Quad City Times between 1970-1979 and could not be replicated today. Consider them tiny time capsules capturing the zeitgeist of a decade. The major cast, 76 photos and trivia make the book a fun read. The decade produced such classics as Alien, Dirty Harry, Apocalypse Now, The Godfather (I & II), The Exorcist, Chinatown, Close Encounters of the Third Kind, Star Wars, One Flew Over the Cuckoo's Nest and many, many more.

Featured in these pages are over 75 photos, major casts, a multitude of reviews, “Best of/Worst of” lists, and trivia for both the film buff and the uninitiated. It Came from the '70s is a slice of film history, painstakingly documented by noted author and journalist Connie Corcoran Wilson. The original reviews found here could not be replicated today. Consider them tiny time capsules capturing the zeitgeist of a decade.

"This book is a wonderful and inclusive chronicle of the 1970's."
—Mick Garris (American filmmaker/screenwriter/director)

“Connie Wilson, the inveterate movie-goer, writes like you’re sitting in the middle of the theater. If anyone knows the silver screen, its hits and its misses, it’s Connie Wilson. For years, she was a valued writer for the Quad City Times with weekly (sometimes daily) reviews. This book is not only a good read, but a fine reference tool. It makes me think of the days when an usher would call out, The best seats are now in the balcony.”
—Bill Wundram, Editor, Quad City Times