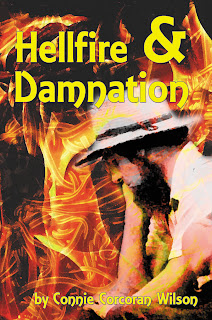 Hellfire & Damnation is a series of short stories (some based on true stories) organized around Dante's Inferno and the 9 circles of Hell.

"Her frame for this collection is unique: stories built around Dante's 9 circles of hell, a unifying concept that is classically fresh. Many of these hellish tales are based on truth, amplified into fiction. Her 4 stories set along Route 66 from Missouri through California are all true ghost stories. The final statements of convicted prisoners on Death Row, as they await execution in Georgia, provide the dialogue for the story that takes us through the Gates of Hell, 'Hotter than Hell.'"
—William F. Nolan (Logan's Run, Nightworlds)

"Connie (Corcoran) Wilson puts her characters through Hell in 'Hellfire & Damnation,' and with her horrific stories, takes me along to places I did not want to go."
—Scott Edelman (Sci Fi Weekly)

"Hellfire & Damnation marks her not so much as a writer to watch, but one to watch out for. Exploring the 9 levels of Dante's Inferno via contemporary settings and sensibilities, and the sins punished therein, this collection veers from sinister noir ("Going Through Hell") to the bizarrely whimsical ("Amazing Andy, the Wonder Chicken") to the outright, no-holds-barred horrific. Never have the 9 Circles of Hell been so much fun. I had a blast following Wilson on her tour of the Inferno, and you will, as well."
—Gary Braunbeck (Coffin County, Far Dark Fields)

"A unique concept binds the tales in Connie Corcoran Wilson's short story collection Hellfire & Damnation. Unified by the theme of Dante's Inferno and its 9 Circles of Hell, each story corresponds to the sin represented by the circle in which it appears and each takes readers deeper into the bowels of Hell...Subjects of many of the tales in the collection seem ripped straight from the headlines, and Wilson's cool and matter-of-fact style serves only to make the stories more disturbing."
—M.J. Turner of Dark Scribe