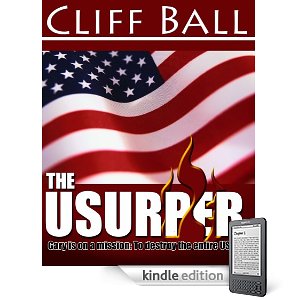 "Cliff weaves an interesting story with enough connections to real happenings in the world today that this book seems to be non-fiction. Just when you think you know where the story line is going Cliff changes up on you. While some things are predictable others are not, which adds to the enjoyment of the book. Some events catch you totally off guard. While it may seem to start slow stick with it, you will not be disappointed."
— Brian

"The Usurper is not usually my favourite type of novel but Cliff Ball really surprised me. This is a very fast-paced, action-packed book once you get past the first few chapters. I think what impressed me the most was Ball's very accurate depiction of the power of indoctrination. In many ways it was a rather chilling view of what 'could have been'. If you like political thrillers then I highly recommend it. I only took away a star because it wasn't really my kind of book so I couldn't get as lost in the story as I would've liked."
—Tracey

"I just finished reading The Usurper and enjoyed the book. I love the concept of this book and the ending caught me totally off guard. The Usurper is a quick read. There are many correlations with the real world that most of us can relate to. If only they had turned out differently. The book smacks of conspiracy theories. Who knows, this book could possibly be one of those that, in a few years, will make us wonder, 'How did the author get so close to the truth?'"
—JC

Ever wonder what would happen if our worst fears were realized, and we elected someone who was willing to destroy the USA no matter the cost to him, his fellow countrymen, or the rest of the world? The Usurper is that novel.

Gary Jackson is raised to hate. Hate the United States, its people, and everything they have ever stood for. His mission is to destroy the country from within, allying himself with the worst of America's enemies, and one very powerful and malevolent billionaire, to accomplish the deed. Once elected to the highest position in the land, Gary puts his lifelong goals to work, and puts the USA onto the path of ultimate destruction. He stops at nothing to rid the USA of his political and spiritual enemies, until a small group decide they've had enough, and they want to stop him. Will they succeed or will the United States be relegated to the dustbin of history?

Book Excerpt from The Usurper (Chapter 4) :

"Do you know who else is enemy of the people?" asked Putin.

"The enemy is anyone who questions the word of the government. They must be destroyed; nobody can be spared if they disagree," answered Gary.

"You know who is one of your enemies, Gary?" asked al Hussein.

"One of your enemies is your mother. She doesn't agree with the government controlling peoples' lives, and she thinks terrorism to control the people is bad. What do you think we should do with her, Gary?" asked Putin.

"My mother is an enemy? But, she could be on our side," Gary innocently said.

"We've talked about this before, Gary, and you know what you must do."

"Yes, I know, but she will destroy all that we are working for, and all of your future hopes and dreams. Again, I ask you, what should we do to people like her?"

Gary sighed, gulped a couple of times, and said, "The enemy has to die as an example to others not to think for themselves and do what they want. If my mother is an enemy, she must die."

"Correct response. We need to go visit your mother to see that she is no longer a threat. Let's go, Gary," ordered Putin.

A few minutes later, the trio arrived at the house Gary and his mother lived in. They went inside, where Ann was in the kitchen cooking dinner. She heard them come in, went to meet them, saw her son, and went to hug him, but, Gary didn't hug her back, so she asked, "What's wrong?"

"You are the enemy, you must be destroyed."