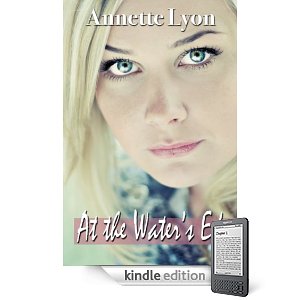 At the Water's Edge

"[At the Water's Edge] is as much a story of spiritual growth as it is a tender love story. Fans of romance won't want to miss this one."
—Jennie Hansen, Meridian Magazine

Annela grew up feeling alone and unwanted. Now she has decided to begin a new life. In her heart, Annela knows that this new path will lead her to the happiness and peace she desires. But shadows from her past keep reappearing, stalling her progress and making her ultimate goal seem unreachable. First her boyfriend, Tommi, pledges his love, all the while acting in ways that destroy her faith in him. Then her mother, Helena, keeps a dark secret from her that could change Annela's life forever. Kenneth appears in her life, but will he help her find the love and happiness she’s looking for, or prove to be one more complication?

Book Excerpt from At the Water's Edge:

“I’m sorry, Annela,” Oskar said, sounding anything but apologetic. He sat in his easy chair, eyeing first his cigar and then his daughter. “You can’t come back home. You’re a grown woman now; you need to make your way.”

“It would be temporary,” Annela said from the couch, trying to convince him. “Just until I find another place to stay. I’d be on my own again before you knew it.”

His right eyebrow arched. “You don’t even have a job.”

Annela pursed her lips together tightly. They had been over this before. She had been laid off from her intern position at Nokia three weeks ago. With the economy in a depression, jobs were hard to find, but she was looking. “I’ll find a job. Soon. If you like, I can pay rent while I’m here. I’ve still got some savings.”

Oskar raised both eyebrows. “If you have money for rent, why do you need to move home? Why don’t you stay at your apartment with Tommi?” A look of comprehension dawned on him. “Unless the two of you aren’t getting along.” He smiled with amusement. “What did you do? It must have been pretty bad if you’ve upset him while he’s out of the country.”

Annela rubbed her forehead with one hand. She reached out to touch his knee, but pulled back warily, unsure of how he’d react. “Father, please. This has nothing to do with Tommi. He doesn’t know I’m leaving yet.” Tommi had been in Stockholm setting up a new location for his restaurant for the past three weeks. He was supposed to have been gone for another week, but surprised her with a phone call that morning saying they’d finished early, and he would return today. She was supposed to have another week to get this all settled, but with Tommi coming home now, she had to get out. Now.

Oskar leaned forward and pushed his cigar into the ashtray on the side table beside him. Clasping his hands together and leaning his forearms against his legs, he said, “All right. Let’s get to the point then. If this isn’t about you and Tommi, what is it about?”

Annela swallowed hard. Of course she would have to tell him eventually, but she had nursed a little hope that she could avoid it for a time. “I’ve decided . . .” Her voice was scarcely audible.

“Speak up, girl. You’ve decided what?” His voice rose a notch.

Annela glanced at her father, then back at her hands. She held onto the handle of her purse a bit tighter, knowing her father’s tone all too well. The same panic she’d felt a thousand times as a child washed over her, and her heart pounded in her throat.

He stood and yanked at Annela’s arm to pull her up too. He raised a hand, and she flinched, expecting to be struck as her mother had been so often.

“Oskar, don’t!” The plea came from her mother, who had just entered the room.

He whirled around. “This is none of your business, woman! You stay out of it.” He turned back to Annela, face bloodshot with fury. He pointed his finger at her, jabbing the air for emphasis. “I refuse to live with a Mormon. The second a drop of baptismal water gets on you, you are dead to me.”

She steeled herself. “This is something that will make me happy. Don’t you want happiness for your own daughter?”

He shook his head back and forth, the veins in his neck popping out. The tension sent Annela’s heart pounding; she took a step back, nearly tripping on the couch behind her.

When he spoke again, he didn’t yell, but his voice was filled with such venom, her knees shook. “No child of mine would join up with those pagans.”

The lock on the apartment door turned, and Annela’s sixteen-year-old sister, Kirsti, came inside. “I’m home,” she said, tossing her book bag onto the floor. She unzipped her jacket, then paused when she recognized the tension in the room. “What’s going on?”

“Your sister has decided to leave our family,” their father said, looking Annela straight in the eyes.

“Not really,” their mother added quietly. “She’s trying to live by a new set of values.”

“Helena, you’re defending the little tramp?” he bellowed. His wife clutched the door frame. “As if our values are somehow inferior? As if we’re not good enough for her?”

Kirsti sat on the arm of the couch and watched. Annela envied her sister’s calm, but Kirsti didn’t need to worry; she could do no wrong in their father’s eyes. “Let me guess,” she said to Annela, then popped a piece of gum into her mouth. “You’re going to be a Mormon.”

“I don’t want that word ever spoken in this house again!” Oskar held Annela’s arm so tightly she choked out a cry. The smirk on Kirsti’s face evaporated. He dragged Annela to the apartment door, opened it, and shoved her into the dim corridor. “Get out.” He slammed the door in her face, sending vibrations and hollow echoes bouncing off the building’s walls.

Annela took a deep breath to stop the shaking in her body. She gripped the handrail and headed down the stairs. Before she reached the outer doors she knew exactly where she was headed—not back to her apartment. She glanced at her watch. Tommi’s plane had landed over an hour ago, so he’d be home any minute. She was grateful that he’d insisted she not change her schedule to meet him there, since it was on such short notice. Instead of going home she decided to go to her place of refuge: the beach.