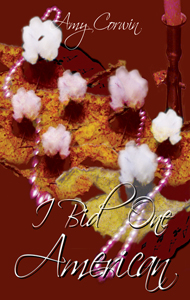 Book Title:
I Bid One American

"I Bid One American is just the thing I needed for a lighthearted read with emotion. I’ll be honest, the title is what first caught my notice, but it wasn’t long before I was entertained by 'his awful Graciousness,' Nathaniel, as Charlotte so succinctly taunts him the night they meet, and the American who really just wants to get on with her life, not caring what ball gown she wears next... I Bid One American is an engaging tale that is sure to please many readers as it did me."
—Romance Reviews Today

An American heiress nobody wants, a Duke every woman is after, and a murder no one expects.

When Nathaniel, Duke of Peckham, meets Charlotte, he’s suspicious of her indifference. Too many women have sought—and failed—to catch him. However, Charlotte is more interested in dead pharaohs than English dukes.

Unfortunately, a debutante seeking to entrap Nathaniel gets murdered, and his reputation as a misogynist makes him a suspect. On impulse, Charlotte comes to his aide, unaware that her actions may bring her to the killer’s attention, too.

Both are unaware that a highwayman interested in rich heiresses is following Charlotte, and that another debutante lies dead in Nathaniel’s carriage.

I Bid One American is a witty historical mystery that keeps you on the edge of your seat with a smile on your lips. Reminiscent of the engaging romantic mysteries by authors such as Victoria Holt and Mary Stewart, I Bid One American is fast-paced mystery you won’t want to miss.

Book Excerpt from I Bid One American:

In this scene, the body is found…
“Your Grace, over here,” another man said, crouching next to a pale form. White silken skirts edged in black billowed over the damp grass, fluttering in the light breeze. “I’m afraid they’re right. She is dead.”

“Is that you, Jackson?” Nathaniel bent to peer over the man’s shoulder.

Her black eyes were open, staring up at the haloed moon. The mists swirling over the grass left her pale skin dewy with moisture and clung to her lashes in large droplets. While Nathaniel watched, a bead of water rolled down her cheek like a final tear falling from her wide eyes.

Kneeling on one knee, he reached out and closed the dark eyes. With gentle fingers, he wiped the moisture off her cheeks. Her flesh still felt soft and faintly warm although he could already feel the change. He stood, wiping the dirt and leaves from his breeches.

Then he remembered the walk he had taken earlier, before meeting Miss Haywood for the first time.

“Oh, God!” he murmured bitterly as a sense of responsibility for Lady Anne’s death hit him.

He had heard Lady Anne calling to him, asking him to wait while he strolled down the cool, dark paths. She had been one of his most ardent and determined pursuers, made more persistent by his foolish actions this evening. He had lost count and danced with her three times tonight. A stupid, thoughtless action he regretted as soon as he realized it. Then he had compounded the error by fetching her a glass of punch and escorting her to supper.

Even Lady Beatrice had noticed it. He had caught her frowning at him while they ate, although she soon covered the expression with a sweet smile.

He had excused himself immediately after the meal and gone out onto the terrace. When he heard Lady Anne calling to him, he bolted down the stairs into the gardens.

He should have waited for her like a gentleman instead of fleeing. And when he finally returned, he ran into Miss Haywood on the terrace. He had promptly forgotten Lady Anne.

It never occurred to him that he had not seen Lady Anne again.

Now he knew why.