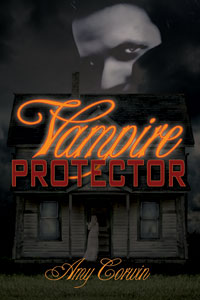 Exploring Gwen's long abandoned childhood home in the company of her attractive neighbor, John, sounds like an intriguing evening. However, she soon realizes her mistake. John is a vampire and her house is not exactly empty. Secrets—and the dead—don’t always stay buried, and John’s extraordinary strength and determination may be all that can withstand what awaits them in the darkness.

Gwen must unlock her memories if she's to survive the deadly company of her Vampire Protector and keep the past from destroying their future.

In the following excerpt, Gwen has asked her neighbor, John Wright, to accompany her to her abandoned family home. She knows he’s a vampire, but despite this, she’s wants the company on this adventure.

But when the two of them get to the house, she’s not so sure it’s a good idea to enter…

John stopped and waited on the stoop. He glanced over his shoulder. When she didn’t move, he held out his hand in a peremptory gesture. She stared at it, thinking how human his hand looked with a sprinkling of dark hairs on the back of his wrists and strong, blunt-tipped fingers.

He must have been working outdoors the day he died, for there was still a tinge of sunburned red deepening the tan. The sun-kissed color reinforced the false sensation of heat radiating from him. He felt warm and alive to all her senses, despite the knowledge that he was not.

Her heart twisted with loneliness. It had been so long since she had felt arms around her. But she hadn’t met a man she felt she could trust, and a vampire was out of the question.

She had lost her way and did not know how to find the path back to a real life.

“Hold my hand if you’re afraid of ghosts,” he offered with a twisted smile. A flicker of sympathy grew in the depths of his eyes, revealing a sad recognition of the gulf between them: vampire and human.

With a sense of surprise, she felt his warm gaze tug her even closer to him. As if his awareness of the differences between them meant they shared similar core beliefs and that she could trust him because of that.

She shivered and thrust her thoughts away.

“Hanging onto your cold, dead fingers is not going to make me feel any better.”

“I’ll warm them for you.” His dark eyes flickered. The corners crinkled with silent laughter.

“You can make me think they’re warm. But they’ll still be cold, dead fingers.” The hairs rose along her neck and arms. She glanced over her shoulder toward the graveyard across the street.

“The remnants of the dead—those tatters—have probably drifted over from the graveyard. They’ll collect here. It’s not that I’m afraid of them. It’s not like they’d consciously attack me or anything, but they’ll be attracted to the body heat of anything living. Like me.”

She gestured toward one of the drifts of leaves in the farthest corner of the porch.

A few pitiful gray, black, and white feathers lay amidst the debris. At some point in the past, a mockingbird had tried to nest in the shelter of the porch. The bird had been sucked dry of energy and warmth before it realized what was happening and flew away. All that remained was a dry handful of feathers and bones.

The sight did not bode well for anything alive that entered the house.

Become a Kindle Author sponsor.
Posted by kucinx at 11:36 PM