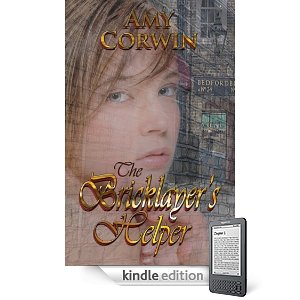 Happily Ever After gives The Bricklayer's Helper five tea cups and says, "The Bricklayers Helper is a fantastic read, the colourful sights, sounds and characters enhancing the high emotion, drama and heart stopping moments. The delightful twist at the end caught me by surprise and had me first tearing up then literally laughing out loud. Well worth reading."

What would you do if you were a young girl, orphaned during the early years of the 19th century?

When Sarah finds herself orphaned after a suspicious fire burns down her home with her family trapped inside, all she can remember is the warning to “run and hide.”  And hide she does. She cuts her hair and dons the garb of a young boy, hoping to survive on her own. In this disguise, she’s obtains a job as a bricklayer’s helper and remains safe for thirteen years.

When work takes her to London, a man from her past recognizes her and arranges a meeting, only to be murdered before they can speak. Frightened, Sarah hires an inquiry agent from the Second Sons Inquiry Agency.

However, the inquiry agent, William Trenchard, is far too attractive for Sarah’s taste. In her experience, handsome men can rarely do more than fumble their way beneath a lady’s skirt, but she fears he may be her last chance.

Unfortunately, her decision may prove to be downright fatal.

Book Excerpt from The Bricklayer's Helper:

In this scene, Sarah, in her guise as Sam Sanderson, has gone to meet a man from her past, unsure what he will tell her about the fire that destroyed her family.

Now, as if aware of her scrutiny, Major Pickering caught her gaze across the street between them. His attention fixed on her. His body stiffened like a dog pointing at a likely grouse. Sam stepped closer to the brick building at the edge of the sidewalk seeking the safety of its towering shadow, her skin prickling.

She glanced around, trying to listen over the pounding of her heart. No one shouted. No one except the major showed any interest in her—other than sheer annoyance when she impeded the smooth flow of foot traffic.

Major Pickering raised his hand, his eyes intent on her face. She took a slow step forward.

Then without warning, he stumbled. His hand fell to his side. His gaze wavered. A look of confusion passed over his thin face. Glancing down, he pressed a hand to his side. And as he brought his palm up in front of his face, his legs buckled beneath him. He fell sharply to his knees, and with a shudder, he raised his head. His gaze once more met Sam’s as his mouth worked soundlessly.

A sense of urgency sent her running forward, hand outstretched. Alarmed by the pallor of his face, she tried to reach him to hear the words he uselessly mouthed. Then, although she couldn’t be sure with the jostling men between them, he shook his head slightly in warning. A spasm twisted his features.

Sam stopped and watched in agonized horror as he slowly crumpled, face down, onto the pavement.

A passerby dressed in black bent over him. His quick hands patted the major’s back and sides.

Several men trying to pass turned and exclaimed in surprise.

“What’s wrong?” one said, his voice carrying above the crowd.

“No—murder!” another man yelled. “Fetch the constable! This man’s been stabbed!”

There was a scuffle as someone pulled back the man in black. More men stopped, glancing around, and Sam dove into the shelter of a nearby doorway. She leaned against the wall, heart thudding with a sense of her own vulnerability.

What if she had arrived on time and stood next to him as that blade severed his life?  Would she have been the victim, instead?

He had died with his attention fixed on her, their gazes locked. They had been staring at each other across a street teeming with strangers and at least one murderer.

Had anyone looked in the direction of his gaze? Had anyone noticed her?