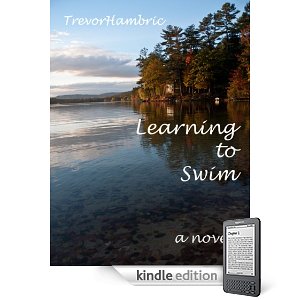 Trevor Hambric, author of Learning to Swim, discusses his book, his journey as a writer, and self-publishing on Kindle.

DAVID WISEHART: What can you tell us about Learning to Swim?

TREVOR HAMBRIC: Learning to Swim is the story of a single mother who, through the course of a decade of summer vacations in New Hampshire’s Lakes Region, learns that life has far more to offer than she’d ever imagined.

Shaped by tragedy in her youth, Hannah Sullivan lives a timid, closed life. And without realizing it, she has taught her daughter to do the same. But Aidan Heron, a man who has experienced his own tragedy and responded very differently, will show them both a new way.

TREVOR HAMBRIC: I can’t remember where I first came across the notion, but I was immediately struck by the idea that everyone walking the earth is the star of his or her own story.

While I have a sense of where the plot of my stories will wind up, I try to be careful not to make the characters simply slaves to that goal. I try to think, How would this person, with these goals and ambitions in life, and with these strengths and weaknesses, respond to what’s just happened?

It may well take the story where I hadn’t planned to go, but many times that turns out better than I had intended, anyway.

TREVOR HAMBRIC: It’s probably obvious to anyone reading the description of the book that it’s targeted at regular readers of mainstream women’s fiction. I hope that it appeals to people who read fiction ranging from Nicholas Sparks to the more literary writing of Pat Conroy.

It would thrill me, though, to make fans of readers who don’t normally read this kind of book.

TREVOR HAMBRIC: I went to NYU film school with the notion of making my living as a writer and director. Early on, I wrote two unpublished novels (a horror and a suspense), and I worked on such cinematic classics as Sorority Girls and the Creature From Hell (not a joke, I promise).

When I figured out that these pursuits weren’t going to support a family (or even me for that matter), I got into computing. After having proven that I could sustain a Big Boy job, I woke up with an undeniable urge to write again. Since then, I’ve worked on a couple novels that haven’t yet quite come around and had some modest success writing short stories for online contests.

Learning to Swim is the result of having decided to lean hard into my writing and do whatever it took to create a novel that made me happy.

TREVOR HAMBRIC: More and more, my quest is to learn to deliver stories quickly. After believing for the longest time that I had to have two hours with perfect conditions in order to write, I’ve finally taught myself to make use of stretches as short as fifteen minutes.

One process I’ve found very helpful is to record my book and listen as I drive. The recording is simple to do with software built in to the Mac, and the listening is very helpful for ferreting out repeated words and themes and uncovering thunking rhythms.

TREVOR HAMBRIC: It’s an odd mixed bag, but these are some names that come to mind. Pat Conroy. Stephen King. Joan Didion. Thomas Harris. Herman Melville. Each has, for different reasons and at different times, shaped what I thought a good story could do and be.

The one who means the most with respect to Learning to Swim is obviously Pat Conroy. His run of books from The Great Santini to Lords of Discipline to The Prince of Tides blew me away. The two latter books both made me cry as an adult, something I would have bet at the time that no book could ever do.

TREVOR HAMBRIC: The Prince of Tides. I am in awe of its gloriously broken characters, its biting wit, and its lyricism. The central love story took my breath away.

TREVOR HAMBRIC: The first step, when the novel’s description finally got populated at Amazon, was to send out an e-mail to a list of writers I’ve attended groups and classes with over the years. I’m also having creative "business" cards printed up, with assorted New Hampshire photos on one side and basic information about the book on the other. I plan to hand these out to anyone who gives me even the slightest opening to talk about the book.

Beyond that, I’m just beginning to participate in Amazon reader’s forums, and I have a series of posts planned for the blog that will be targeted specifically at drawing readers who might find the book worth reading.

I have lots to learn in the area of marketing and promoting, and I’ve made a promise to myself to do something every day for the foreseeable future to promote the novel.

TREVOR HAMBRIC: Under the traditional publishing model, a small handful of people become the gatekeepers for the whole world. They, alone, decide whose books are worth reading.

With Kindle, we’ve taken a huge democratizing step. No one stands between authors and their potential audience. There is a cost for this, of course, in that we’ve had a major safety net yanked from under us. It is now quite easy to publish something awful. But from where I stand the upside more than compensates for that risk.

There is another aspect here that I haven’t heard talked about. It’s the fact that electronic publishing eliminates the requirement that a book find its audience immediately. Since there is essentially no cost to a book’s continued existence, it is possible, over time, to tweak every aspect of the pitch and presentation. Whereas a traditionally published book must be a hit right now or be gone forever, an eBook can more slowly find its way.

TREVOR HAMBRIC: Make absolutely sure that the book is the best you can make it. Recruit readers you trust and make sure they understand that you want brutal honestly, that you want to hear what doesn’t work about the book.

Praise is fine (and we all need some of it), but in the editing phase, particularly, the book has to come first. Then, even if painful criticism comes your way, be grateful for it. 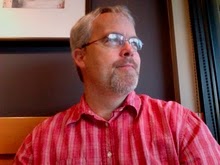 Trevor Hambric is a graduate of NYU film school who lives in Southern California with his wife and son (who is growing up way too fast). He pays his bills with software development while pursuing his passions for writing and photography.