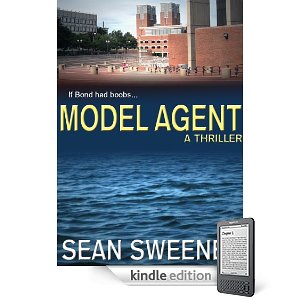 Sean Sweeney, author of Model Agent, discusses his book, his journey as a writer, and self-publishing on Kindle.

DAVID WISEHART: What can you tell us about Model Agent?

SEAN SWEENEY: Model Agent is what I hope to be the first in a line of thrillers. It's actually the second one I've penned; turns out the first one is the sequel to Model Agent. Anyway, Model Agent introduces the reader to Jaclyn Johnson, a partially-blind counter-terrorism agent of the CIA. She's pretty, vivacious. She turns the heads of both sexes. She uses her cover as a fashion model to get close to targets, and then, under the alias Snapshot, manages to defeat her enemies. Model Agent takes place mainly in Boston, along with a few other corners of Massachusetts. I spent a few hours in Boston doing detail research, so the color is there.

SEAN SWEENEY: With a thriller, an author must keep the reader on the edge of their seats, then make them say, "I didn't expect that." I talked with a local basketball coach on Thursday night; he's reading the book. I asked him how did he like that first chapter. He said the above. An author must put their characters in crazy situations, or blow stuff up, to make the tension.

SEAN SWEENEY: We're supposed to develop characters? Who knew? Just kidding... When I find out how I developed Jaclyn, I'll let you know. :)

SEAN SWEENEY: In this case, anyone who likes a pulse-pounding, keep you riveted to your chair, action-packed story.

SEAN SWEENEY: My journey has been a crazy one. Lay offs from newspapers convinced me to stay away from the 9 to 5 grind, or to the 1 to 11 grind, what have you. I've learned so much being freelance, more than I learned in high school or any college courses I've taken.

SEAN SWEENEY: A dream inspired Model Agent. I outlined the plot in about a week, went to Boston and Worcester for detail research. I tried to have a 2,000-word-per-day pace. When I come up with a concept, I can think of nothing but that little idea: dishes go unwashed, clothes unfolded. I have to write down my ideas in categories: characters, settings, plot points. I'll then go ahead and hand-write a 15-25 page treatment which I use as my guide while I write.

Once I start writing, I have a routine: I wake up early, have a couple cups of coffee, then get started. I can usually get a few thousand words written by noon. I have lunch, take a nap, then, if I don't have an afternoon game, I'll write a couple thousand more before I go to a night game or make dinner. After I file my gamer or eat, I'll write a little more. Rinse, lather, repeat.

SEAN SWEENEY: Wow... probably Steven Savile's Silver. It's only been out a year, but that book is the book I wish I had written. Of course, it's based in Europe, so my traveling exploits wouldn't do it justice the way Steve did.

SEAN SWEENEY: This is the way the publishing world is headed, like it or not. E-publishing cuts out the gatekeepers who deem for the reader what to read. That's not the way this country was founded; that's not democratic. With Kindle (and Nook, and Smashwords), I'm in full control of the content, how it looks, and what the price for the consumer is. I keep the price low because I want readers, and I want to be read.

SEAN SWEENEY: Easy: These are Joe Konrath's rules. 1. Have a low price; 2. Have great cover art (my cover art lacks, but hey, it is what it is); 3. Write a fantastic description to give customers a good idea what they are buying; and 4. Write a damn good book. Make sure you do your research and decide what your goals are. If I were a first-time author, I'd go with Kindle and its ease. Let the readers decide if you're good enough to publish.

DAVID WISEHART: Thanks, and best of luck with your book. Sean Sweeney was born in the city of Fitchburg, Massachusetts, in 1977. His love of fantasy began 11 years later when he was handed J.R.R. Tolkien's classic The Hobbit. His passion for writing began in 1993, as a sophomore in high school, when he began to write sports for his local newspaper, the Sentinel & Enterprise. Since then, he has written for several Massachusetts newspapers, including the Telegram & Gazette of Worcester and the Southbridge Evening News in Southbridge. He has since returned to where it all started, as he came back to the Sentinel in April 2008. He also strings for the Springfield Republican and Turley Publications.

Sweeney also writes under the pen name John Fitch V. Read my previous interview with him about his book Turning Back the Clock.