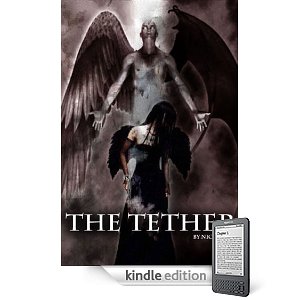 Nick Davis, author of The Tether, discusses his book, his journey as a writer, and self-publishing on Kindle.

DAVID WISEHART: What can you tell us about The Tether?

NICK DAVIS: The Tether is a paranormal action adventure set in the city of Baltimore; it follows the journey of Sarah who is given a device called the Tether, that looks like a simple Rosary, that allows her to control an Angelic being called Paul, and also gives her the ability to cast indices, which are like enchantments.

The Tether is the first book in the series and chronicles Sarah’s first full night as the Tether Keeper as she discovers what the device can do, while being chased a demonic entity called The Dark, that wants the device and Sarah for itself. She is aided by CT, the grandson of the original Tether Keeper, and she is also pursued, and then helped by a shadowy organization called the Custodiet.

I call the novel a chase story as by the time you get to the middle of the story everything is in motion. A kind reviewer over on B&N said it read like a Hollywood blockbuster, although I’m not sure about that there is a certain frenetic feel about the pacing, as we race towards Sarah’s evitable confrontation with The Dark. 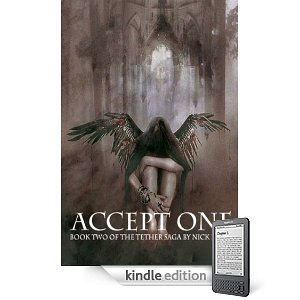 NICK DAVIS: The story starts off slow, and actually develops a slight Stephan King feel to the first half-a-dozen chapters. After that we are a passenger as we follow Sarah into this disturbing world, which is just like our reality, but is slightly twisted.

Using Sarah as our vehicle into this world we experience it alongside her, there are no answers magically given to her, and no one sits down and gives her a lecture about the Tether or its purpose. Each character in the story has their own motivation to help, or hinder Sarah and even the Dark is not purely evil in its ambitions. Using the Characters POV to pull the reader through the story sets up the story.

NICK DAVIS: I really don’t know how to answer this, there are several characters in the first book and I’ve tried to give them all a different voice and point of view to the events. I won’t list them all, but this is what I tried to do with the four main protagonists.

Sarah is your typical High School Teenager, a little mouthy and when we met her she has just been bounced into this school by her father as her last chance. She has had some bad experiences, losing her mother and falling into the wrong crowd. She is confused, mixed up, and emotionally still dealing with her mother’s death. I tried to base her reactions on what a real person would do in this situation, when they are confronted with something so out of the ordinary, that is should really be in a comic book.

CT is the perhaps the most difficult to write for as he is carrying the expectations of his family on his shoulders. He has been trained almost since birth to be the next Tether Keeper, and this is snatched from him by pure chance. Even though he is committed himself to helping Sarah, he is warring with that side of him that says it should have been him. You actually see this come to the surface a couple of times. Also even though he wont admit it to Sarah, he is almost just as lost as her dealing with these Demonic threat.

Paul is the Angelic Guardian that Sarah can control. He was the easiest to write for as he is at the moment a blank. Unable to act without direction, I tried to make him more of the straight man of the group. His story, and why he is attached to the Tether, doesn’t really start becoming clear until the third book.

Christian is the psychopath that is responsible for Sarah getting the Tether. He was really fun to write as he was completely no hold bars with his limits. He is absolutely insane, groveling, snidey, sniveling, and nutty as a tracker bar. He is comical, dangerous, murderous, and tragic, and a blast to write, the ultimate toady.

NICK DAVIS: I actually don’t really know. The Tether has been read and enjoyed by so many different readers it’s hard to pin down. The story is an action adventure, almost comic book like in its action and I do keep a frenetic pace. I think anyone who loves fast paced adventures will like this book. I can say the oddest reader was a 280lb ex-Defensive Lineman, not the type you would associate with this type of book, but he loved it.

NICK DAVIS: I’ve been writing for a very long time, although I didn’t really do anything serious until I was in my mid-twenties.

The first time I was ever paid to write was for White Dwarf Magazine, a Games Workshop monthly publication. I was one of the lead feature writers for that magazine for about 5-7 years and loved every minute of it. It was good feeling knowing your work was being read, and you were influencing people through your thoughts.

The Tether was an idea I had been playing with since about 2001. I wrote odd excerpts here and there, and then moved on to other things. It wasn’t until I read a pep talk letter from Neil Gaiman that he wrote of National Novel Writers Month, did I actually sit down and write The Tether. Until then I was certain I was the only one who had problems pulling the words out of my head and constructing a story from them. It was an eye opener to see someone has prolific and Neil go through the same doubts as me.

The first draft of The Tether was written during NaNoWriMo, while other may mock this event I found the camaraderie comforting, and helped me get the first draft done. Lots of editing, and then even more editing I decided to see if people would read my work, so I published it as an eBook, first through Smashwords and then the Kindle.

NICK DAVIS: Painful. My wife hates it when I start writing because she knows how much I struggle to get started. The first 10K is the hardest for me, after that it’s less painful, but that first 10K can take almost two weeks to land.

What I try to do is write a little everyday, 500-1000 words are fairly easy now to do in the little spare time that I have. I construct my novels from a series of one line sentences that describe where I want each Character to go, and end up. As I go I delete these sentences, move them around and add to them. The second book was 32 sentences, which turned into 72K words.

After that it’s a case of doing one very important thing, perhaps the best piece of advice I ever got about writing.

Just write, the words will sort themselves out when you get them in front of you.

NICK DAVIS: I think this should say what writers inspire me.

I love Terry Pratchet, his work is amazing. Able to make you laugh one minute, and cry the next. His Discworld series is one of the best collections of books you can ever read.

Ronal Dahl, for remembering that the best stories, even for children all have a little darkness in them. Read The Fantastic Mr Fox, pure genius in character design.

Neil Gaiman for inspiring me to really start writing.

Brian Michael Bendis for dialog that will simply leave you going wow.

Ed Brubaker for the depth he puts into his stories.

Mark Millar, for being so cinematic with his visions, although I think he could be a little less cynical and at times embrace the fantastic.

And JRR Tolkien, for taking me on a journey that was pure magic.

I haven’t really read a novel that I sat back and said I wish I wrote that. I have encountered stuff that is like my work, and leads me to draw the conclusion that there are no new stories anymore, just different ways of telling them.

NICK DAVIS: The cover of The Tether is a series of stock images blended together using Photoshop, using the skills I developed in my real life job as a Graphic Designer. Not that complicated to do, just takes a little time and patience to build.

NICK DAVIS: Oh my, I don’t know if I am the right person to ask about this. I’ve done book signings, pounded the pavements, talked about my book on message boards, contacted reviewers and shouted about my book at every opportunity. Sometimes it works; sometimes for all your effort you see nothing in return. I don’t think there is any way of catching lightning in a bottle, it just happens.

NICK DAVIS: The most obvious is because it’s the most popular e-reader device out there. Also Amazon make it so easy to get your work on it, its really a no brainer.

NICK DAVIS: Advice can be freely given, but can by dearly heard… I can only suggest formatting.

Forget your indents, your drop caps, your pretty little chapter graphics. Publishing on any e-reader device is all about the formatting. Don’t be precious about it and remember that your work is going to be read across multiple devices with very different screen sizes, and it will look different on each one.

Keep your formatting clean, simple and easy. I recommend reading the Smashwords Style Guide and following it. I used that to create the master, that I use to publish to all eReader devices and I’ve had zero problems.

Nick Davis is an Englishman currently living on the East Coast of the USA not too far removed from Charm City (aka Baltimore). He is a former White Dwarf feature writer, now freelance content creator and fully employed Web Designer.

He is married to a very patient Irish American lady and has four children. When Nick is not working, running errands, playing with his kids or burrowing through an ever growing list of ongoing house 'projects'. He can be found plodding away on a keyboard exploring the worlds of his imagination that takes our reality and twists it around just a couple of degrees...