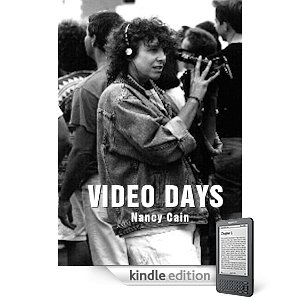 Nancy Cain, author of Video Days: How Street Video Went from a Deep Underground Phenom to a Zillion Dollar Business, What Was Gained and Lost Along the Way, and What We Saw Through the Viewfinder, discusses her book, her journey as a writer, and self-publishing on Kindle.

DAVID WISEHART: What can you tell us about Video Days?

NANCY CAIN: Video Days: How Street Video Went from a Deep Underground Phenom to a Zillion Dollar Business, What Was Gained and Lost Along the Way, and What We Saw Through the Viewfinder begins 1969 when video technology was still virtually unknown. A portable video camera was an oddity. The only people who had them were cops, hippies, and conceptual artist Nam June Paik, who recorded the Pope's visit to New York in 1965 using one. The cops recorded the faces of the hippies at events and political actions and the hippies loved to shoot video of the cops shooting video of them. When I would overhear the word "video" being spoken on the street or in a restaurant somewhere, I would assume that people were talking about me. It was logical. And if I turned to look, I would often see people pointing at me and my camera and they would be smiling and waving. They’d want to know how much it cost, was it heavy, and what was it for. It cost maybe 15 hundred dollars, the deck and camera together weighed about twenty pounds, and it was for adventure and freedom and possibilities and truth. It wasn't movies or television, it was video. Video was a rover. Video came along for the ride. Video was immediate. It was participatory.

During that summer of 1969 while working on a pilot production for the CBS television network, I met the Videofreex. They had just returned from the Woodstock Festival of Peace and Love with amazing reverse angle footage that completely changed the way I saw television and the world. Ultimately, the network passed on our project but I stayed with the Videofreex, and then struck out on my own. Video Days is about me and my camcorder, where we went together for the next thirty years, and how television media changed as a result of this technological revolution.

DAVID WISEHART: What are some of the positive and negative effects of the video media revolution?

NANCY CAIN: Today our good old video media revolution is history. It has been replaced by the social media revolution, which is huge, and important beyond belief, all streaming and instantaneous, a people’s medium. It belongs to all of us in a sense. Video is everywhere—it detonates our bombs, it watches our babies. It’s digital. Not a good thing or a bad.

NANCY CAIN: Any student of history interested in video media from 1969 to the present, featuring  events not often mentioned in the straight media. All who are interested in documenting the world around them, any video enthusiast posting to YouTube and Facebook. Anyone who is interested in politics, television, art, drama, humor, pirate TV, or communal living. Anyone who lived in Detroit in the fifties, New York in the '60s, the Catskill Mountains in the ’70s, or Venice Beach in the '80s and '90s.

NANCY CAIN: I have always carried a notebook with me, jotting down observations and commentary. In the '80s I began publishing articles in the LA Weekly, the LA Reader, and The Realist.

NANCY CAIN: I transcribe from my notebooks and my videos in a linear fashion then go back over the material at the keyboard eyes closed and describe the events as they appear in my mind’s eye. Later, I take the linear stream and pull it apart then weave it back together in a way that adds tension and moves the story along. I don’t work from an outline although I think that is probably a good idea.

NANCY CAIN: My husband satirist Paul Krassner inspires me daily by his own example of  excellence.


Excerpt from "The 90's." "Los Angeles Abortion Rally." An Operation Rescue group demonstrates outside of an abortion clinic while pro-choice activists protest the pro-life presence. Shot by Nancy Cain.

NANCY CAIN: Stopping by Woods on a Snowy Evening by Robert Frost.

NANCY CAIN: I must admit that I published this book suddenly, so from the moment it occurred to me that I was going to be able to publish this book right now, to the time that I uploaded the completed manuscript, perhaps ten minutes had elapsed. I quickly chose a photograph of me shooting video on the street near my home a Venice Beach. I’ve always liked that picture because it shows a whole crowd of people looking in one direction, while I am shooting video in the opposite direction. I thought it was kind of punchy in a black and white. I typed the title over the picture. There wasn’t enough room to type the entire title so I just typed Video Days. It looked like a cover to me.

NANCY CAIN: I wish I had a clue. I put my Kindle link out to all my facebook friends and a link to it on  every email I send. Some people have linked it to their sites too. I really would love to figure out how to sell a virtual book. Seems like online would be the only way since you’re asking people to click to buy it. I will say that the sixteen copies I have sold have been quite well received.

NANCY CAIN: Why not? I see no down side. I put some closure to my project by publishing, and am in control of my media product. I can still look for other deals. I give the same advice (if you can call it that) to others thinking of self-publishing on Kindle. 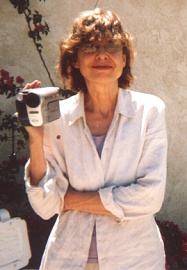 Nancy Cain writes, "I am a video pioneer with roots in guerrilla television. I have worked through the years creating alternatives to broadcast television. I have documented politicians, protesters and ordinary people at work, on the street, and in their homes. Along with the Videofreex, we produced an off-beat weekly video show in Soho New York, operated an editing studio for the use of visiting artists and video producers, and founded Lanesville TV, known as 'Probably America's Smallest TV Station.' Lanesville TV's pirate broadcasts were made possible by a transmitter donated to us by Yippie activist Abbie Hoffman. Robert Sklar, in his book Prime Time America: Life on and Behind the Television Screen, described Lanesville TV as being 'like a local newspaper that each week publishes a story by Saul Bellow or an essay by E.B. White.'

"During the '70s, along with Videofreex organization Media Bus Inc, we ran state-wide video workshops teaching people how to make their own TV and how to access their local cable channels, paving the way for today's community cable and the Internet where concepts of public access are often taken for granted. Along with TVTV, a production group which defined the radical video documentary movement known as 'guerrilla television,' we used portable, light-weight equipment for news gathering, shooting candid behind-the-scenes footage at events ranging from political conventions to the Super Bowl.

"In Los Angeles in the '80s I worked on several of the then-new reality television programs, and as a location director for a late night TV show on Fox. In 1989, along with Tom Weinberg and the Fund for Innovative TV in Chicago, we developed The '90s, a weekly hour-long alternative news and features program using camcorder footage. Richard Nilsen of the Arizona Republic wrote, 'The '90s happens to be the best show on TV.' The '90s ran for three seasons on PBS, after which Judith Binder and I co-produced CamNet, the Camcorder Network, a programming service seen 24 hours a day on United Artists cable systems in eight cities. TV Guide called CamNet 'a non-establishment C-Span,' the Wall Street Journal described CamNet as 'Cinema Verite meets vox populi,' and Rolling Stone heralded CamNet as 'a brilliant and democratic vision...a people's CNN.' We produced CamNet out of my Venice Beach bungalow, using footage from a dozen or so video journalists across the country.

"My video has been seen in galleries and museums including the Museum of Modern Art, The Whitney Museum of Art and the Musee d'Arte Moderne in Paris. I taught video at Goddard College in Vermont and Antioch College in Los Angeles. I now live in Desert Hot Springs, California with my husband, satirist Paul Krassner. I have recently completed a memoir titled Video Days: How Street Video Went from a Deep Underground Phenom to a Zillion Dollar Business, What Was Gained and Lost Along the Way, and What We Saw Through the Viewfinder. Published on Kindle."