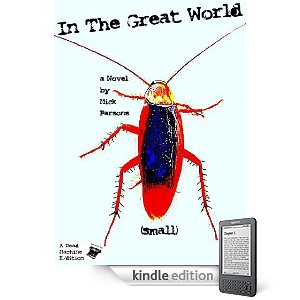 Mick Parsons, author of In the Great World (small), discusses his book, his journey as a writer, and self-publishing on Kindle.

DAVID WISEHART: What can you tell us about In the Great World (small)?

MICK PARSONS: It's an American story set in the post-American century. The narrator was pushed out of New Orleans in the wake of Katrina, only to land in Phoenix, AZ. He lives in a cheap motel; he hangs out at the MTP Sports Bar and Grill—when he has money—and drinks in his room when he doesn’t. He scrapes by on day labor and a short-term work ethic. He’s got no interest in regular work, going back to college, doing anything, or maintaining a relationship.

Through him we meet other people who are just as broken, though less aware of their situation, and we view the world the narrator lives in: a post 9/11 two-dimensional world without morality or ethics, where people get screwed over whether they do the right thing or not; a world of drug dealers, abused wives, manipulated boy toys, bookies, hookers, crooked cops, and a cocaine-addled bar owner. All of them are, like the narrator, just looking for some kind of shaky comfort in the world; and, just like the narrator, unable to find it.

As the story progresses, the narrator mingles bits of his own life—a Midwestern semi-religious upbringing, the death of his father, a failed early marriage, a deserted college career—in with the sometimes unflattering descriptions of the people around him. And finally, as the shaky world he’s created around himself starts to fall apart—the day jobs run out, the bar is closing, the motel is shut down so that the local university can build a parking garage—he finds himself forced to do the one thing he never really likes to do: make a decision about what to do next.

MICK PARSONS: Anyone who's looking for more than escape, but is tired of the the spineless state of contemporary American Literature.

MICK PARSONS: I've been writing seriously for almost 15 years. I've spent most of that time honing my craft. I write because I'm not good at much else.

MICK PARSONS: I've used social networking sites, my blog, and Amazon. I've also toyed around with other marketing avenues, but there's a whole underbelly industry dedicated to scamming writers and doing nothing to get the work to a larger community of readers.

MICK PARSONS: It's the most accessible form of indie publishing other than blogging. It enables writers to maintain control over how their work is read, and takes the stress of worrying about distribution out of the equation; this leaves more time for focusing on writing and marketing.

MICK PARSONS: Explore all avenues of getting your work out to readers; ebooks are becoming a more solid and respectable format everyday, and Amazon allows writers be independent. And because Amazon doesn't require an ISBN—which is an expensive part of overhead in indie publishing (one of the many ways that big publishing houses have maintained a stranglehold on what people read)—it's that much easier to get the work out there. And that's what matters.

DAVID WISEHART: Thanks, and best of luck with your oboks. 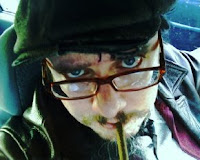 Mick is the author of In the Great World (small), The Greyhound Quarto, Living Broke: Short Stories as well as two collections of poetry: Fragments of Unidentifiable Form, and Lines from Another Book of Common Prayer, all of which are availble from Publish America. His work has been featured on semantikon.com and has been published in The Licking River Review, the Dispatch Litareview, the American Mythville Review, The Smoking Poet, and Antique Children. Mick currently resides in Northwest Illinois with his wife Melissa and their two cats, Blue and Gumbo. When he isn't writing, he might be holding up a stool at the only bar in town or exploring the tundra that's now his home. He might need a hair cut.