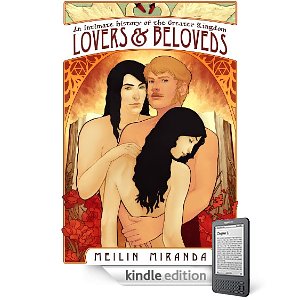 MeiLin Miranda, author of Lovers and Beloveds: An Intimate History of the Greater Kingdom, discusses her book, her journey as a writer, and self-publishing on Kindle.

DAVID WISEHART: What can you tell us about Lovers and Beloveds?

Naive and sheltered Prince Temmin, Heir of Tremont, is newly arrived to his father King Harsin's court in the City. He quickly finds himself the target of assassins sent by enemies he didn't even know he had.

What's more, the Gods known as the Lovers are luring Temmin into serving them for two years; King Harsin works to stop him, fearing the fulfillment of an ancient prophecy. Haunted by his own mistakes, Temmin must confront the intimate history of his ancestors and decide between the direct, pragmatic path to power offered by the King, and the more subtle, spiritual path of the Lovers.

With the help of his family's immortal advisor Teacher, Temmin must make his choice. One will lead to ultimate glory for Tremont, the other to its end, but which one is which?

MEILIN MIRANDA: Like most if not all writers and actors, I can fragment my personality at will. :) I think of a person in a particular situation, possibly a person I've met, and build from there. For example:

The lead character, Temmin, began as a daydream about a 14-year-old boy with whom I had a frightening encounter at age 10. I started thinking about what it would take for him to redeem himself, if it was even possible for him to redeem himself, and what kind of person he would have to be to grow from having done what he did into a better person. (The boy himself, I doubt he became a better person, but I don't know and I don't care.)

MEILIN MIRANDA: Someone who likes what I write, and will pay me for it! :D

If you mean what kind of reader is most likely to be attracted to my work, it would be someone unafraid of explicit content in the context of a story; overly straitlaced people won't like it at all. On the other hand, it has to be someone who's looking for more than erotica. The biggest problem I have in getting people to read my work is this: I give it to a mainstream reviewer and they say, "Gosh, there's a lot of sex in this, but it's good anyway!" I give it to an erotica reviewer and they say, "Gosh, there's not much sex in this, but it's good anyway!" (I've been lucky; I've gotten near-universal good reviews.) So yeah, the ideal reader would be someone who not only doesn't mind sex but also doesn't expect nothing BUT sex.

MEILIN MIRANDA: I wrote nonfiction for a living for 30-plus years—since I was a teenager. In late 2007 I started writing fiction. I'd wanted to all my life, but after a horrible workshop experience in my 20s (mostly my fault) I stopped even trying. I started in 2007 with fanfiction, specifically Dr Who / Torchwood fanfic. I wrote everything I wanted to write in that fandom by early 2008 and started working on my own original stuff. I'd always been afraid to write as well because I knew what was going to come out; even in stories with no sex at all in them I tend to start out in my mind with the sexuality (or lack thereof) of the characters. Who are these people to one another? That frightened me; I did not grow up in a sex-positive home or time.

MEILIN MIRANDA: I do a sort-of-an-outline in Scrivener (writing software for Mac—HIGHLY recommended). Then I start filling it in, moving bits around and so on. Often when I get stuck I grab my poor husband or my best friend and "talk story" at them, poor things. Recently I've spared their ears and started "pre-writing"—sitting down with a composition book and one of my fountain pens and talking to myself on the page until something breaks loose. That has been working really, really well.

MEILIN MIRANDA: I tend toward the 19th century, or people who write in that style: Jane Austen; Georgette Heyer; the Brontes; Dickens; and my very favorite, Patrick O'Brian. If I ever write one sentence as well as O'Brian, I will be a happy writer. Of more modern writers in both style and time, I especially like Lois McMaster Bujold and MFK Fisher.

MEILIN MIRANDA: "The Mountains of Mourning" by Lois McMaster Bujold. That is a near-perfect novella.

MEILIN MIRANDA: Any way I can, and that's a fact. As an independent, it's hard to find people to review my books; the prejudices against self-published writers are still very strong in the review community, no matter how good the book is. I have a psychic friend who told me the book was going to do very, very well, and that I had to stop looking at PR as a mountain to climb, but rather a mountain to go around. Consequently, I've turned to my readers for help, and they've given it to me. I've participated in book giveaways, put excerpts of the book out everywhere I can think of. I'm serializing the book at my own website 1,000 words or so at a time twice a week; it's free. The thing is, once you're hooked you're going to want to find out what happens next. You can continue reading it for free, but it won't finish up until October of 2011. OR, you can buy the book for only $2.99 and read the whole thing right now!

Perhaps the smartest thing I ever did, and I didn't know it at the time, was serialize the first draft of the book. It was awful enough that I couldn't let it stand in the end; I don't want people thinking that draft is the best I can do. The neat thing was that when it came time to rewrite and produce the book, my fans kicked in $2500 in pre-sale packages to hire an editor, a cover artist, and a typographer; my book is 100% "crowdfunded" and completely professionally produced. It looks just as good as anything out of New York—in some cases, better.

MEILIN MIRANDA: I have a Kindle myself and I love it. It only made sense.

MEILIN MIRANDA: Make sure your book is absolutely the best it can be. Unless you're such a seasoned pro that you can guarantee your manuscript has no plot holes, no grammatical or spelling mistakes, and no typos, HIRE A PROFESSIONAL EDITOR. I know a good one (Annetta Ribken, http://www.wordwebbing.com/). I could never have rewritten my book without her. If you can't make that financial commitment to your book, chances are you're not ready to publish.

The second piece of advice is to hire a good cover artist. This is as critical as getting a good editor. Mine is Alice Fox (http://www.alicefox.net), but I don't know if she's accepting work right now. JA Konrath swears by his designer Carl Graves (http://extendedimagery.blogspot.com/); I haven't worked with Carl, but his covers are good. You can find good artists digging around on deviantART, too.

For the interiors, you can format them yourself with the help of some of the guides out there. Just remember: simple is better. If you're also going to print at the same time, though, I strongly suggest hiring a typographer/book block designer. It makes a difference. I do the book block for my smaller books (the Scryer's Gulch series), but the History series is all professionally designed for the print version. 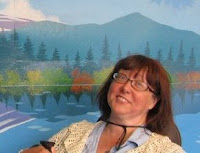 MeiLin Miranda is the pen name of a longtime professional nonfiction writer who finally got past the saying that every journalist has a book inside him—and it should stay there. Once she did, she started posting draft installments of her series-in-progress An Intimate History of the Greater Kingdom as a webserial, eventually ending the draft at 300,000 words! In the process, she accrued a fan base of more than 2,000 people and an understanding that what she was working on was not sustainable as a serial; it had to become a series of novels. To keep serial fans happy, she created Scryer's Gulch: Magic in the Wild, Wild West.

MeiLin is a successfully crowdfunded author; her readers pay to keep her content online and freely available. When it came time, fifty of her fans bought special packages and raised $2500 to get her first book professionally edited and produced. The result was Lovers and Beloveds: An Intimate History of the Greater Kingdom.

MeiLin licenses her work under Creative Commons, and believes strongly that if readers love her work, they will support her. So far, they do.

When she's not scribbling, MeiLin spins and knits, plays D&D, reads way too much PG Wodehouse and Patrick O'Brian, fiddles with fountain pens, collects BPAL perfume, and hangs out with her husband, two daughters, two cats and a small floppy dog.