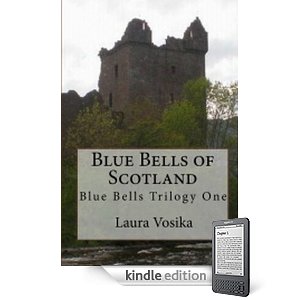 Laura Vosika, author of Blue Bells of Scotland, discusses her book, her journey as a writer, and self-publishing on Kindle.

DAVID WISEHART: What can you tell us about Blue Bells of Scotland?

LAURA VOSIKA: Blue Bells of Scotland is the story of two men, polar opposites but for their looks and love of music, who go to sleep in a Scottish keep in their respective times, and wake up in the wrong centuries, caught in one another's lives.

Shawn Kleiner is a modern American musical phenomenon, a womanizing, gambling, drunk, who prides himself on his self-centeredness. Niall Campbell is a devout medieval Highland warrior with the fate of Scotland resting on his shoulders.

They switch places two nights before Niall is supposed to leave on a dangerous journey to raise troops for Scotland's battle of Bannockburn against an overwhelming English force. Shawn finds himself making the trip in Niall's place, with Niall's tempting betrothed, chased by English soldiers and a castle traitor.

Niall, meanwhile, learns the horrifying accounts of his own death and the disaster at Bannockburn, and must fight all the messes of Shawn's life—amorous fans, a pouty mistress, a pregnant girlfriend, gambling debts—to figure out how to get back to save Scotland. Not to mention, he must play Shawn's sell-out concert, under threat of being 'fired.' He doesn't care if it's with arrows or at the stake, he wants no part of it. And then there's the issue of coming to like Shawn's life of ease...

DAVID WISEHART: What research did you do for the book?

LAURA VOSIKA: I started with hundreds of hours of online research, starting from the very basics, such as, which battle in Scottish history might involve streaming banners and noble deeds? My research now includes dozens of books on Scottish and medieval history. I study the Gaelic language, and even have a 600 page book giving original transcripts and English translations of literature from the thousand years surrounding Niall's time, to get a feel for the difference between medieval and modern Gaelic.

My favorite part of research, however, was my trip to Scotland in 2008, traveling to each of the locations in the book, even borrowing my brother-in-law's medieval-style leather boots to hike mountains, to see what it might have been like for Shawn.

LAURA VOSIKA: Some, I don't have to. They just are who they are right from the beginning, they're so strong. They do as they please and speak as they please. Shawn and Niall are like this. But even for them, and for other characters who are not so strong-willed on their own, I write complete dossiers and family histories. I know their childhood memories, their favorite colors, their childhood best friend, everything.

LAURA VOSIKA: Someone who loves history and time travel. Someone who likes well-rounded characters. Some people definitely see romance in this book, but it's not a standard romance. Definitely not a bodice-ripper. I try to reflect real people in real life (well, apart from that little time travel issue!) so people in this story have questions about faith and God. I've noticed that outside the Christian genre, there's a strange absence of any mention of faith or God, although most people do think about that. People in this story do exactly what people are doing in the real world, sometimes things I wouldn't do, although I don't feel it needs to be graphic, either, so my ideal reader would be someone who appreciates that balance. Someone who likes 'real' people with all their flaws and good qualities combined. It really bothers me in books when characters who disagree with the author's world view are all bad, while those who agree with the author's world view are all good. This simply is not realistic.

LAURA VOSIKA: I started writing when I was eight. At ten, I started my first novel, and got about ten handwritten pages into it before finding that someone had already written a novel with a similar plot (The Gang That Couldn't Shoot Straight). I quit for awhile, but went back to writing through high school and college. I finished a novel when I was 24, and set writing aside for about 15 years, due to my growing family. In 2005, I started again, and Blue Bells of Scotland was published in 2009.

LAURA VOSIKA: I take a kernel of an idea, jump in, and start writing. I stop to research as I go. I write as fast as I can from start to finish, set it aside for a few weeks or even months, and come back for a read-through. From there, it's hard work editing and doing a great deal more research, catching plot holes and inconsistencies, and setting it aside for a week or two to come back and do it all over again. I go through that process probably six or seven complete times.

LAURA VOSIKA: Jennifer Egan, Diane Setterfield, Mary Higgins Clark, Dick Francis, Ted Dekker, Mark Twain, and O. Henry. I like, in various cases, their stories, their creativity, their unique spin on things, their ability to write one great story after another, and their humor and ability to surprise.

LAURA VOSIKA: There are so many great stories out there, but if I have to pick just one, I think The Thirteenth Tale by Diane Setterfield. Or The Keep by Jennifer Egan.

LAURA VOSIKA: I've done a few blog tours, guest posting, and interviews at many sites for readers. I keep a blog and a facebook page where people can learn more about the story and the history behind it.

LAURA VOSIKA: It's a great market, with more and more people turning to the convenience and lower prices of e-readers.

LAURA VOSIKA: Don't rush the process. Take the time to edit, and re-write, and do it again and again and again. Have people read the book for you and give you honest feedback. Join a writing group in real life or online. 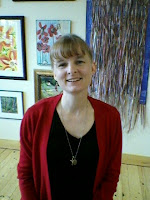 Laura Vosika grew up in the military, visiting castles in England, pig fests in Germany, and the historic sites of America's east coast. She earned a bachelor's degree in music, and worked for many years as a freelance musician, playing trombone for pit orchestras, ballets, and symphonies, and flute and harp for other venues. She spent three years as a member of the Buz Whiteley Big Band and Farragut Brass Band in Bremerton, WA.

After earning a masters degree in education, she took a job as a music teacher and band director. She has also taught private lessons on wind instruments, piano, and harp, for twenty years.

In her spare time, Laura likes to play piano, harp, and flute, do sudokus, and learn Gaelic.

She currently lives in Minnesota with her nine children, and assorted menagerie.

Laura Vosika is the author of the Blue Bells Trilogy. In addition to the Trilogy, she is working on several other novels and a non-fiction book on raising a large family.