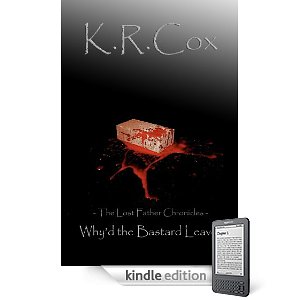 K.R. Cox, author of Why'd the Bastard Leave?, discusses his book, his journey as a writer, and self-publishing on Kindle.

DAVID WISEHART: What can you tell us about Why'd the Bastard Leave?

K.R. COX: Why'd the Bastard Leave? is a story about a 19-year-old man who loses his family in a terrible accident. Left without hope, he only finds solace in searching for clues about his father, a man who abandoned them when he was just six years old.

It is a fantasy novel, the first in a series of five, and will take Orryk on roads he never expected and through troubles he would other wise not have needed to deal with.

K.R. COX: I develop my characters as they learn from the problems and grow by learning from their mistakes, like we all do; the characters just learn at a faster pace cause the story moves along swiftly.

K.R. COX: My ideal reader is anyone who enjoys adventure, as I've spent a good number of years traveling, and if my book inspires someone to take some chances, board a plane, and visit other places, or cultures, then I'll be quite happy. A qualifier is that I wouldn't recommend the book for anyone under 17 years old. Some parts are quite graphic and have suggestive moments.

K.R. COX: I have been writing seriously for the past three years. I started writing my first book while I was teaching English in Japan and then I finished it while I was teaching English at a University in New Zealand. That book was then edited but after many rejections from agents and publishers I discarded the book, partly from rejection, partly because I wasn't satisfied with it myself.

Six months later I had started and stopped writing three other stories and just couldn't seem to find a plot line or characters I liked. Then my father visited me and once he departed I suddenly had the idea for a story about a father, not a great one like mine, but a totally bastard who leaves his family. I realized I had something great so I began brainstorming furiously and wrote every idea down I could think of until I had managed a general outline of what I wanted to see in the series. Whether it continues to follow that outline, we'll all just have to see. The first book, though planned out, has taken quite a few different directions than the first draft.

K.R. COX: To agonize and procrastinate until I have nothing left to distract me from sitting in front of the keyboard. Don't get me wrong, I really do enjoy writing. Once I actually sit down prying me away is next to impossible. I get completely immersed in the process of creating paragraphs and trying to show what I want to reader to experience. I enjoy making the individual people up and seeing where my brain will take them next, sometimes I really surprise myself with the connections I make and the directions I send my characters. But getting started sometimes takes a real effort.

K.R. COX: Though there are a great many authors I like, a few really stand out in my mind.

William Golding's Lord of the Flies was incredibly written, that man really had a way with the language. Sometimes I would read a sentence again and again just breathing in the images he was able to create.

Jack London is another favourite of mine. White Fang was an amazing story and he was able to capture the essence of a dog so well, it's as if he was one himself for a period of his life.

Anne Rice is another great author. Interview with a Vampire was so beautifully written. She was able to capture a dreamlike quality to the tale with her long, amazingly well-crafted sentences.

Margaret Weiss, though in my opinion not the best author on this list, wrote about characters when I was younger that I was able to look on as role models. Now, as an adult, I find her characters not as interesting, but for a decade she had my money every time she released another novel.

K.R. COX: That would be plagiarism and that's a no-no.

K.R. COX: You, actually, are one of the people who would be helping me with that. I've only been on the market with my work for about a month and getting started is always tough, especially in the writing business.

I've spent money on pay-per-click campaigns on Facebook, which drew in some fans, but otherwise was a waste of money.

I sent requests to book blogs along with a copy of my work in hopes they might be interested in reviewing it.

I bought pay-per-click ads on Good Reads but am not sure of the progress there, I've not checked recently.

I have posted on Kindle Boards in the hopes people might drop by.

Outside of the Internet, I've had an interview in the local paper in my town, and have been invited by the library to speak at their monthly author...thing. That's going to be very exciting. Any chance to meet people who have read, or will read, or just want to find out who I am, is great!

K.R. COX: I published on Kindle because it is the future. E-readers are fantastic devices, and I mean ones that use e-ink tech. The idea that I've got something that reflects like a piece of paper without having to turn pages, fight the wind, etc...is fantastic. Plus the long battery life, the light weight, and the ability to get books wherever you are is top notch!

K.R. COX: It's cliche advice, all us authors say it, but, be tenacious. You are probably not going to make it big and you are probably going to be swallowed by the ever increasing numbers of authors publishing out there, but keep trying. Of course there always comes a time when you know you should quit, by following one dream too long you might miss out on something even better, and more suited to your personality. And by all means, never give up a day job to follow your dream until you actually discover it's going to give back to you.

But give it a shot. At worst you'll be where you were, which probably isn't so bad.

K. R. Cox is an Albertan. He likes watching men beat the snot out of each other on UFC, drinking gin and tonics, and writing.

Exploring other countries is a genetic drive and has brought him to some interesting places: hiking all night to watch the sunrise atop Mt. Fuji, cheering in the box seats at the Kokugikan in Tokyo as Sumo bash and push each other from the ring, watching hundreds of dolphins in New Zealand as they spin and leap from the ocean, wandering through palace gardens in Germany, and staring over Loch Ness from the destroyed battlement of an old castle.

But at the end of a long day, curling up with a good book by a fireplace, and a warm drink, is his favorite pleasure. Unless of course the book is crap and he has to deprive the world of it by lobbing it into the flames.

For this reason he has dedicated himself to working his a$$ off to write great stories in the hopes that they won't get the delete key from his readers. "Ebooks are the future; why wouldn't I want to be part of the future?"