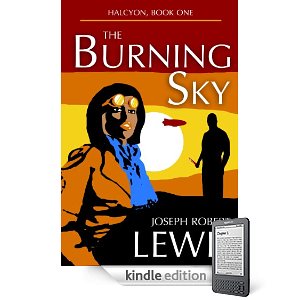 Joseph Robert Lewis, author of The Burning Sky, discusses his book, his journey as a writer, and self-publishing on Kindle.

DAVID WISEHART: What can you tell us about The Burning Sky?

JOSEPH ROBERT LEWIS: The Burning Sky is a genre-bending chase story set in an alternate Morocco. It's historical fantasy, steampunk, swashbuckling adventure, and thriller all in one. It's the first installment of my Halcyon trilogy, which is also the first set of books in my Other Earth series, a globe-spanning collection that will also include heroic fantasy, horror, and folklore. I wrote it with my young daughter in mind, hoping to create a heroine for her who is as realistic and complex as she is exciting and cool.

Taziri Ohana is an elite airship pilot, though the long hours away from home have taken a toll on her family and she longs for a simpler life. When the Northern Air Corps is wiped out in a catastrophic fire, only Taziri survives to help the marshals pursue the suspects across the skies of Marrakesh. Their investigation reveals a vast conspiracy of deposed aristocrats, wealthy industrialists, and warmongers plotting against the crown. Taziri discovers that her own inventions have been perverted by the conspirators, the cities plunge into violent riots, and their only hope for salvation may be an exiled princess, her swashbuckling escort, and a crippled airship plummeting out of the burning sky.

JOSEPH ROBERT LEWIS: Most of my characters start out as a collection of spare parts from other characters in movies or TV shows or real life. A face, a voice, a nervous tic, a swagger. I collect images and sounds in the back of my mind, the best parts of everything I see and hear. And then as I develop the story, I weave the characters into each other and the plot to build their relationships and increase the tension and excitement.

JOSEPH ROBERT LEWIS: My ideal reader probably cares more about complex and sympathetic characters than densely woven plots. My stories are much more about people coping with strange and stressful situations. I also like to create unconventional heroes to break up some of the genre stereotypes about gender, age, and physicality.

JOSEPH ROBERT LEWIS: I've wanted to write novels since I was very young. Oddly enough, I didn't like English in high school, and yet somehow I ended up an English Lit major in college! I had a lot of false starts, but eventually I began completing novels and submitting them to literary agents and editors. I got a lot of positive feedback and requests to read my full manuscripts, but no progress beyond that. Then, after seeing so many writers self-publish on Smashwords and Amazon, I figured I had nothing to lose by trying. I published my first novel, Heirs of Mars, in November 2010 and it's been garnering positive reviews since day one. Self-publishing has also been a great way to meet readers, other writers, and to make friends from all over the world.

JOSEPH ROBERT LEWIS: I love research. I could spend hours on Wikipedia, jumping from topic to topic and following links back to primary resources to learn about people, religions, cultures, machines, events, art, animals, and anything else that grabs my attention. I use my research to build up my worlds and my characters, and then I sketch out a rough outline and start writing. I write between 1,000 and 3,000 words per day. Routine is very important.

JOSEPH ROBERT LEWIS: Mike Mignola's Baltimore (The Steadfast Tin Soldier and the Vampire). It's a great little horror story, full of diverse myths from around the world. And the writing is tight and spooky. Very atmospheric. It's the sort of book that you write because it's exactly what you want to write, or would want to read, rather than playing to market or genre expectations.

JOSEPH ROBERT LEWIS: Extensively! First I made the book available on Amazon, Barnes & Noble, and Smashwords. Then I created pages about the book on Goodreads, LibraryThing, Shelfari, and AuthorsDen. I also joined the Steampunk Writers and Authors Guild. Then I made announcements on my blog, Facebook, Kindle boards, Nook boards, and Mobileread. Then I submitted information about my book to a number of charming and talented book bloggers. I'm also offering the book for free to readers who offer to post reviews where the book is sold.

So that kept me pretty busy on Launch Day. I think it's best to get it all done at once. I also have a few paid advertisements that should be popping up in the next few weeks, including Kindle Nation.

JOSEPH ROBERT LEWIS: Amazon is a good company. They've certainly had their stumbles and fumbles, but they have given both creators and consumers a very cost-effective and easy-to-navigate marketplace for all sorts of things, including ebooks. Beyond the tools and infrastructure, Amazon offers authors a great royalty rate on individual sales, and the Kindle community itself is a very active and social group of people who love reading and love to talk about books. It all adds up to a great time to be an author, especially an indie author.

JOSEPH ROBERT LEWIS: Learn, learn learn. There is a ton of information, freely available, from many successful indie authors about the technical and business aspects of writing, publishing, and promoting your book. Don't make any assumptions. Ask lots of questions. You will need to learn quite a few things about files and forums, but none of it is rocket science and once you've done it, it becomes very easy to do it again.

Above all, be professional. Treat self-publishing like a real career, especially if you hope to one day have it actually become your fulltime career. Be polite when you communicate with anyone. Listen more than you speak. Acknowledge your mistakes and try to correct them. Don't make excuses. Take your time. And pay it forward. 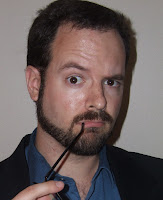 Joseph Robert Lewis writes, "I began writing novels after a decade of writing and publishing about military theory and history, science and technology, politics and economics, and the real-life stories of soldiers, adventurers, and entrepreneurs. But writing novels is more fun. I love exploring cutting-edge ideas as much as ancient worlds, forgotten myths, and bizarre creatures. I particularly enjoy creating memorable characters as well as rich and immersive worlds. And I plan to be writing for a very long time."