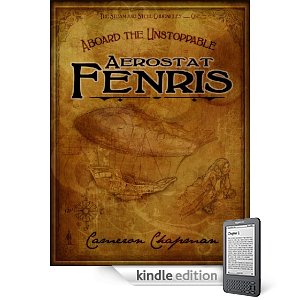 Cameron Chapman, author of Aboard the Unstoppable Aerostat Fenris, discusses her book, her journey as a writer, and self-publishing on Kindle.

DAVID WISEHART: What can you tell us about Aboard the Unstoppable Aerostat Fenris?

CAMERON CHAPMAN: Aboard the Unstoppable Aerostat Fenris is the first novella in The Steam and Steel Chronicles, which is a romantic steampunk series. It follows the journey of Isabelle Feeney Hemsworth and Airship Captain Stig Rayner as they transport mysterious—and potentially dangerous—cargo from the Russian Empire, through northern Europe, and eventually on to London. Mythology, including Norse and Greek myths, play a big part in the novella, and the overall series.

I consider it “romantic steampunk” because while each individual book has it’s own main plot that’s more in line with traditional adventure or fantasy stories, the overall story arc of the series is more in line with typical romance novels. I felt like just calling it “romance” would be misleading on a book-by-book basis.

CAMERON CHAPMAN: Developing characters is one of my favorite parts of writing. They’re often the first thing that comes to me when I’m thinking about a new project. In Aboard the Unstoppable Aerostat Fenris, Stig came to me as a very fleshed-out character. I knew right away that he had Norse heritage, that he was a loner, that he was maybe a little dangerous and had a dark past. Isabelle was a bit harder. It took me a lot longer to get her right, and she’s much different now than she was when I started.

One of my biggest tricks for creating a character is to “cast” the character from the beginning. I find a person, usually an actor, though not always, who physically matches my character. This helps me keep track of my characters right from the beginning, when I might not know much about them. It also helps me visualize their mannerisms and how they’d react in different situations.

When working on a story, my characters completely invade my head. They consume my thoughts, talk to me, and generally drive me crazy. They very much come alive. I like to think of them as real people who exist in a fictional world. And if I don’t do things the way they want, if I don’t tell their story as they “live” it, they tend to get angry and stop cooperating. There’s nothing worse than having someone in your head who refuses to speak to you and just goes around stomping their foot all day.

CAMERON CHAPMAN: I think my ideal reader is probably someone a lot like me. Story is paramount to me. As long as the story is good, I can appreciate work across a wide range of genres. Writing style is also important to me, though it takes a back seat to the plot. I try to write the things I would want to read.

One thing that always bothers me a bit with genres like hard sci-fi or high fantasy is the amount of backstory and world-building that sometimes takes place. It can really slow down the pace of a story, and that’s not always a good thing. I’m a pretty spare writer when it comes to description, only putting in what’s necessary to ground the reader in the world and the story. I think it makes my writing more accessible to those who aren’t

CAMERON CHAPMAN: I’ve wanted to be a writer for as long as I can remember. I attended my first summer writing program when I was eleven. In high school I wrote a lot of really, really bad poetry. Then, in college, I started writing screenplays. I wrote a couple, but then life got in the way and I didn’t write much for a few years.

I think it was 2005 when I started blogging. I started out with an environmental blog, and then quickly landed a gig writing for Mashable. From there, I took on more blogging jobs, and when the magazine I worked for folded in 2007, I started putting most of my attention into blogging. It was later that year, while I was still mostly unemployed, that I started writing a novel. I finished a first draft in a marathon writing session that lasted six days. It was horrible, but I haven’t stopped writing since.

I still blog full time, and I’ve put out one non-fiction book and have another one in the works, but fiction writing is where my real passion lies. To date, I’ve completed six novels (most of which are still being edited), three screenplays, one non-fiction book, and two novellas.

CAMERON CHAPMAN: My writing process is pretty sporadic, and depends largely on the project. But usually it starts out with a lot of note-taking and research. Sometimes this planning stage lasts for only a few days, and other times it lasts for months.

Eventually, it will get to the point where the story is all I can think of, and that’s when I start writing. At that point, sometimes I’ll write in marathon sessions. But usually work gets in the way and I end up writing for an hour or two every day, mostly in the evenings. I try to write a well-structured novel in the first draft. If I decide to change things halfway through, I just leave notes for myself to change things during revisions, rather than going back and revising, as I tend to lose momentum if I do that.

Momentum is key for me. If I lose it, I have a very hard time getting it back. When I’m writing, I tend to carry my laptop with me everywhere. I write in the car, in front of the TV, in bed, and at my desk. This past summer, I spent time writing in a field while my husband played airsoft. Background noise and activity don’t bother me.

When my first draft is finished, I put it away for a few weeks or a few months. When I’ve forgotten about it, I print it out (10 point Courier New, double-spaced, printed two-up on a page) and start going through it with a red pen. I love the way red ink looks on the page. When that’s done, I start re-typing the manuscript, incorporating the changes and finding other things I want to change as I go. When I’ve finished those revisions, I use a couple of beta readers who point out additional flaws or areas that need improvement.

The entire process, from start to finish, takes anywhere from a couple of months to a couple of years.

CAMERON CHAPMAN: There are so many authors I draw inspiration from. Philip Pullman’s His Dark Materials trilogy has been a big inspiration in my steampunk work, as has Neil Gaiman’s Neverwhere, which I read in middle school (it turned me into a life-long Neil Gaiman fan). I definitely lean more toward the fantasy end of the steampunk spectrum, rather than the sci-fi end (though figuring out how the lift gas and ballast in the aerostats worked was an interesting challenge that I was happy to take on), and both of those authors do the same.

Other authors I admire and am inspired by include Stephen King, Jeffrey Lent, and Ayn Rand. I also love the work of H.G. Wells and Jane Austen.

CAMERON CHAPMAN: Hands down, it has to be American Gods by Neil Gaiman. American Gods was as close to perfect as I think a novel can get.

CAMERON CHAPMAN: I believe in the slow and steady when it comes to marketing. I blog regularly about writing and my WIPs. I’m on Twitter and have a couple thousand followers, though a large number of those are related to my blogging rather than my fiction.

I’ve got a Facebook page for The Steam and Steel Chronicles (http://www.facebook.com/pages/The-Steam-and-Steel-Chronicles/193448314014361), and I update with both things of interest to steampunk enthusiasts and information about my books. I’ve also included an excerpt from the first chapter there. And I’ve been setting up interviews and reviews on a variety of blogs to get the word out more.

I went into this with moderate, realistic expectations, and hope to build a readership slowly. In either March or April, the second book in the series will come out, and from there I’ll be working on building my backlist as much as possible. I have a few other books in the pipelines that will also be coming out this year.

CAMERON CHAPMAN: The great thing about Kindle is that it’s so accessible. It makes it easy to get your work out there. It’s really opened up a world of possibilities to indie authors. Five or ten years ago, if you wanted to self-publish, you had to spend a bunch of money on a small print run and practically beg bookstores to stock your books. Now, you can get your novel out there for a fraction of that cost, and reach a much larger market. Being able to sell books at lower prices also gives indie authors an advantage, since we can price our books low enough that readers are willing to take a chance.

CAMERON CHAPMAN: Take your time to get it right. If you’re not a meticulous proofreader with excellent grammar skills, hire someone who is. If you feel like you need development help, hire a good editor. Make sure that your cover is as professionally-designed as any you’d see in a bookstore. Either learn to properly format your book, or hire someone to do it for you. Hand-coding is worth the extra time and effort required, in that you get a superior end product. Indie authors are finally gaining some respect in the book world, and we can all do our part to keep building that momentum if we hold our work to the same quality standards a mainstream publisher would. 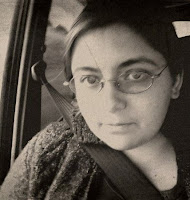 Raised in New England and Virginia, Cameron Chapman has been writing off and on since grade school, though she knew at an early age she wanted to be a writer when she grew up. She’s been blogging professionally since 2006, and started writing fiction “seriously” in 2007.

Chapman lives in Northern New England with her husband, two dogs, and a rather ornery cat. When she’s not writing, which is rarely, she enjoys being outdoors (and sometimes she combines the two).

Visit her blog, Cameron Chapman On Writing (http://cameronchapman.com), or follow her on Twitter (http://twitter.com/cameron_chapman) or Goodreads (http://www.goodreads.com/author/show/3096743.Cameron_Chapman). In addition to writing, she does occasional design work, and has recently been focusing on book design (both interior and covers).