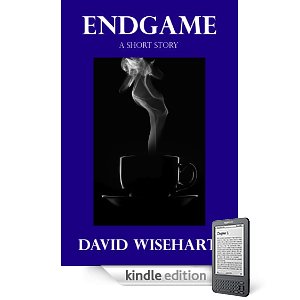 A woman meets a man at a cafe. They strike up a conversation. But instead of telling stories about themselves, they decide to tell stories about each other. After a friendly game of chess the woman learns that some stories are more true, and more terrifying, than she could have possibly imagined.

It's now available on Kindle:  "Endgame" by David Wisehart.
Posted by kucinx at 11:44 PM