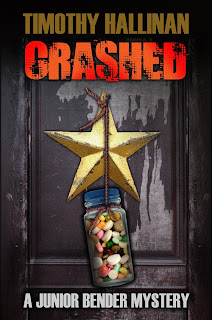 "Tim Hallinan has created a must-read series that you will find hard to put down! Do not miss any of these books."  — Brett Battles, author of the award winning Jonathan Quinn Series

"Crashed is pure rapture.” — CJ West author of The End of Marking Time

Another novel by Tim Hallinan, The Queen of Patpong, was voted Best Novel of the Year by the 4 Mystery Addicts group.

Crashed, the first book in a new series by critically acclaimed thriller writer Timothy Hallinan, introduces Junior Bender, is a high-end burglar who moonlights as a private eye for crooks. In Crashed, Junior finds himself on the wrong side of his own already paper-thin moral code, being forced to prevent sabotage against a multi-million dollar porn film starring exactly the kind of person he'd normally want to protect. At the age of 23, Thistle Downing is broke, strung-out, and on the edge of obscurity. But between the ages of eight and fifteen, she was the biggest television star in the world. Now desperate, she's facing the ultimate humiliation . . . and she's so wasted she doesn't even know that someone's been trying to kill her. And in between her and all that, there's no one – except Junior.

Junior has accepted a commission to steal a painting from an unoccupied mansion but has accidentally broken a beam of light that opened a dog door, releasing a pack of Rottweilers into the house. He's managed temporarily to chase them off, but now he has to get downstairs and out the front door.

**
About a tenth of a second after I ducked behind the open door to Mrs. Huston's Palace of Clothes, the dog shot into the room at fifty miles an hour. I could see it trying to brake on the hardwood, putting on the skids with its rear legs, as I stepped around the door and slammed it behind me. Two seconds later, the dog's body buckled the door from the other side, but it opened in that direction, so I didn't waste a thought on it.

In the bedroom, the hallway door still yawned open, and the small area of the hall I could see was miraculously dog-free. I grabbed the painting and my bag and headed into the hall. I was five feet from the top stair when the Rottweiler in Mrs. Huston's mega-closet came straight through the door, just a black streak and a bunch of white wood chips.

I slung the painting, keeping it as flat as possible, at the stairs, and heard it start to bump its way down. I tossed my bag over the banister. The dog covered the fifteen feet between it and me in less time than it takes to bite your tongue, gathered itself down on its haunches, and jumped.

I jumped straight for the top of the banister, where I windmilled my arms for a sickeningly off-balance second, and then – with the dog three feet above the hardwood, coming teeth first, and closing fast – I shoved off and sailed into space, twenty feet above the gleaming marble floor of the entrance hall, flailing my way through the thinnest of thin air toward the thick gold chain that supported the crystal chandelier.

And got my hands around it, but it was slick with grime, and I slid down it almost as fast as I'd been falling until I managed to hook a couple of fingers through the links in the chain. I nearly dislocated both shoulders, but it stopped me. I hung there, gasping for breath, swaying back and forth as the chandelier jingled like a full-scale carillon beneath me, and watched the dogs assemble below. The one who had burst through the door trotted downstairs to join the other two. And there they stood, looking up at me like I was a squirrel whose time was up.

And then, just to make the moment more special, another dog, big enough to take the other three like aspirin, shouldered its way into the hall with a growl so low it rattled the crystals in the chandelier. The other three backed off to a safe distance, but kept their eyes on me.

There was a little creaking sound, and the chain – and I – dropped about three inches. I reflexively looked up and was rewarded by a nice eyeful of plaster dust. Then something snapped, and I dropped another three or four inches, and it was raining small pieces of ceiling. The dogs started barking in anticipation, and why not? Dinner was about to be delivered via airmail.

An idea flashed through my mind, more like an image, really, and not a particularly persuasive one. The stained glass in the door. My feet, breaking it cleanly. My body, following my feet to land uninjured and intact, on the front porch. The dogs pouring through the broken – no, no, stow that, deal with it when it's necessary.

And what was the alternative, anyway?

I swung my legs back and forth, and, with much creaking, the chandelier and I began to travel in an arc, a huge jangling pendulum. A sound like BOICK heralded another drop – maybe a foot this time, but I was getting a pretty good swing going. I focused my eyes directly on the stained glass, visualized a clean passage through it, and, with the adrenaline-heightened vision of those about to die, I saw:

I had exactly enough time to think noooooooooooo before the chain pulled free from the ceiling and I was plummeting downward, way too fast, with the chandelier's long icicles floating away from it below me like the world's biggest, most glittery spider, and then it hit the marble with a noise so loud it could've been heard over the Big Bang, and an explosion of crystals, crystal fragments, and crystal dust billowed out in all directions, and the terrified dogs scattered to the cardinal points of the compass as I landed on top of it all.

No time to hurt, no time to bleed. I got up, snatched my bag, grabbed the painting, opened the door, and pushed the SUB ZERO carton outside. I slammed the door shut just as the first dog hit it with all his weight, and I hauled off and kicked the door back, creating an entirely new level of canine insanity inside.

With trembling hands, I loaded my bag and the painting into the carton, tilted back the dolly, and wheeled the whole thing 73 shuddering feet and nine inches to the curb. It took me a couple of tries to get the rear doors of the van open, but when I did, I just upended the dolly into the back – the carton wasn't supposed to be heavy any more, anyway – and slammed the door. Then I went around to the front, got in, and leaned forward until my forehead was resting on the steering wheel.

Just as I was getting my breathing under control, something cold touched the back of my neck, and a man's voice said, “Well, look who's here.”