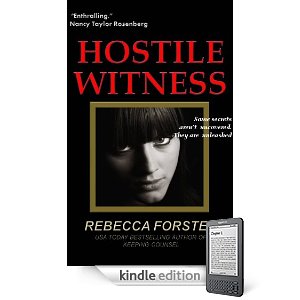 "An enthralling read, with colorful, well-developed characters and the unique atmosphere of the California beach communities."
Nancy Taylor Rosenberg

“Some books are a good story. Other books are well-written. This book is the best of both. Hostile Witness brings fascinating characters into a thrilling story.”
Joe

“A wondrously human heart beats inside the chest of this particular lawyer…that - plus a beautifully constructed plot - is what makes Hostile Witness a novel you just can't put down.”
Daniel Jolley

“If this one doesn't keep you guessing you must be psychic.”
Big Al

“If you like lawyer mysteries then this is a great series for you. For those with Kindles, the formatting is great.”
KindleKat

“Forster is a terrific writer with a great feel for the small details that make characters come alive.”
A Customer

When sixteen-year-old Hannah Sheraton is arrested for the murder of her stepgrandfather, the chief justice of the California Supreme court, her distraught mother turns to her old college roommate, Josie Baylor-Bates, for help. Josie, once a hotshot criminal defense attorney, left the fast track behind for a small pracitice in Hermosa Beach, California. But Hannah Sheraton intrigues her and, when the girl is charged as an adult, Josie cannot turn her back. But the deeper she digs the more Josie realizes that politics, the law and family relationships create a combustable and dangerous situation. When the horrible truth is uncovered it can save Hannah Sheraton or destroy them both.

"This story was inspired by a case my husband handled. As a superior court judge he had to sentence a minor to life in prison. It made me wonder how I felt about minors arrested for violent crimes. Are they most vulnerable among us - capable or horrible violence, perceived as adults and yet emotionally still children?" — Rebecca Forster

Rebecca Forster
Today California buried Supreme Court Justice Fritz Rayburn. Governor Joe Davidson delivered the eulogy, calling the judge a friend, confidant and his brother in service to the great state of California. The governor cited Fritz Rayburn as a man of extraordinary integrity who relentlessly pursued justice, continually uplifted those in need and, above all, protected those who were powerless.

It was a week ago today that Justice Rayburn died in a fire that swept through his Pacific Palisades mansion in the early morning hours.

No formal announcement has been made regarding who will be appointed to fill Justice Rayburn's position, but it is speculated that Governor Davidson will appoint Rayburn's son, Kip, to this pivotal seat on the California Supreme Court.

Hannah kept her eyes forward, trained on two rows of rusted showerheads stuck in facing walls. Sixteen in all. The room was paved with white tile, chipped and discolored by age and use. Ceiling. Floor. Walls. All sluiced with disinfectant. Soiled twice a day by filth and fear. The fluorescent lights cast a yellow shadow over everything. The air was wet. The shower room smelled of mold and misery. It echoed with the cries of lost souls.

Hannah had come in on a bus full of women. She had a name; now she was a number. The others were taking off their clothes. Their bodies were ugly, their faces worn. They flaunted their ugliness as if it were a cruel joke, not on them but on those who watched. Hannah was everything they were not. Beautiful. Young. She wouldn't stand naked in this room with these women. She blinked and wrapped her arms around herself. Her breath came short. A step back and she fooled herself that it was possible to turn and leave. Behind her Hannah thought she heard the guard laugh.

Hannah tensed, hating to be ordered. She kept her eyes forward. She had already learned to do that.

"We're an equal opportunity employer, sweetie," the woman drawled. "If women can guard male prisoners, then men can guard the women. Now, who's it going to be? Me, or him?"

The guard touched her. Hannah shrank away. Her head went up and down, the slightest movement, the only way she could control her dread. She counted the number of times her chin went up. Ten counts. Her shirt was off. Her chin went down. Ten more counts. She dropped the jeans that had cost a fortune.

"All of it, baby cakes," the guard prodded.

Hannah closed her eyes. The thong. White lace. That was the last. Quickly she stepped under a showerhead and closed her eyes. A tear seeped from beneath her lashes only to be washed away by a sudden, hard, stinging spray of water. Her head jerked back as if she'd been slapped; then Hannah lost herself in the wet and warm. She turned her face up, kept her arms closed over her breasts, pretended the sheet of water hid her like a cloak. As suddenly as it had been turned on the water went off. She had hidden from nothing. The ugly women were looking back, looking her over. Hannah went from focus to fade, drying off with the small towel, pulling on the too-big jumpsuit. She was drowning in it, tripping over it. Her clothes—her beautiful clothes—were gone. She didn't ask where.

The other women talked and moved as if they had been in this place so often it felt like home. Hannah was cut from the pack and herded down the hall, hurried past big rooms with glass walls and cots lined up military style. She slid her eyes toward them. Each was occupied. Some women slept under blankets, oblivious to their surroundings. Others were shadows that rose up like specters, propping themselves on an elbow, silently watching Hannah pass.

Clutching her bedding, Hannah put one foot in front of the other, eyes down, counting her

steps so she wouldn't be tempted to look at all those women. There were too many steps. Hannah lost track and began again. One. Two ...

A word stopped her. The guard rounded wide to the right as if Hannah were dangerous. That was a joke. She couldn't hurt anyone—not really. The woman pushed open a door. The cock of her head said this was Hannah's place. A room, six by eight. A metal-framed bed and stained mattress. A metal toilet without a lid. A metal sink. No mirror. Hannah hugged her bedding tighter and twirled around just as the woman put her hands on the door to close it.

"Wait! You have to let me call my mom. Take me to a phone right now so I can check on her."

Hannah talked in staccato. A water droplet fell from her hair and hit her chest. It coursed down her bare skin and made her shiver. It was so cold. This was all so cold and so awful. The guard was unmoved.

"Bed down, Sheraton," she said flatly.

"And I told you to bed down." The guard stepped out. The door was closing. Hannah was about to call again when the woman in blue with the thick wooden club on her belt decided to give her a piece of advice. "I wouldn't count on any favors, Sheraton. Judge Rayburn was one of us, if you get my meaning. It won't matter if you're here or anywhere else. Everyone will know who you are. Now make your bed up."

The door closed. Hannah hiccuped a sob as she spread her sheet on the thin mattress. She tucked it under only to pull it out over and over again. Finally satisfied, she put the blanket on, lay down and listened. The sound of slow footsteps echoed through the complex. Someone was crying. Another woman shouted. She shouted again and then she screamed. Hannah stayed quiet, barely breathing. They had taken away her clothes. They had touched her where no one had ever touched her before. They had moved her, stopped her, pointed at her, told her, and Hannah couldn't remember who had done any of those things. Everyone who wasn't dressed in orange was dressed in blue. The blue people had guns and belts filled with bullets and clubs that they caressed as if they were treasured pets. These people seemed at once bored with their duty and thrilled with their power. They hated Hannah and she didn't even know their names.

Hannah wanted her mother. She wanted to be in her room. She wanted to be anywhere but here. Hannah even wished Fritz wouldn't be dead if that would get her home. She was going crazy. Maybe she was there already.

Hannah got up. She looked at the floor and made a plan. She would ask to call her mother again. She would ask politely because the way she said it before didn't get her anything. Hannah went to the door of her ... cell. A hard enough word to think; she doubted she could ever say it. She went to the door and put her hands against it. It was cold, too. Metal. There was a window in the center. Flat white light slid through it. Hannah raised her fist and tapped the glass. Once, twice, three, ten times. Someone would hear. Fifteen. Twenty. Someone would come and she would tell them she didn't just want to check on her mother; she would tell them she needed to do that. This time she would say please.

Suddenly something hit up against the glass. Hannah fell back. Stumbling over the cot, she landed near the toilet in the corner. This wasn't her room in the Palisades. This was a small, cramped place. Hannah clutched at the rough blanket and pulled it off the bed as she sank to the floor. Her heart beat wildly. Huddled in the dark corner, she could almost feel her eyes glowing like some nocturnal animals. She was transfixed by what she saw. A man was looking in, staring at her as if she were nothing. Oh, God, he could see her even in the dark. Hannah pulled her knees up to her chest and peeked from behind them at the man who watched.

His skin was pasty, his eyes plain. A red birthmark spilled across his right temple and half his eyelid until it seeped into the corner of his nose. He raised his stick, black and blunt, and tapped on the glass. He pointed toward the bed. She would do as he wanted. Hannah opened her mouth to scream at him. Instead, she crawled up onto the cot. Her feet were still on the floor. The blanket was pulled over her chest and up to her chin. The guard looked at her—all of her. He didn't see many like this. So young. So pretty. He stared at Hannah as if he owned her. Voices were raised somewhere else. The man didn't seem to notice. He just looked at Hannah until she yelled "Go away!" and threw the small, hard pillow at him.

He didn't even laugh at that ridiculous gesture. He just disappeared. When Hannah was sure he was gone she began to pace. Holding her right hand in her left she walked up and down her cell and counted the minutes until her mother would come to get her.