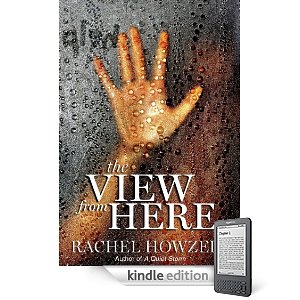 The View from Here

5 Stars - Beautifully Executed Literature
by Amy Eye
"Am I seriously going crazy? What is wrong with me? Many of us have asked ourselves this question many times, and it is no different for Nicole.

Nicole has been hit hard many times in her life by devastating losses from early life until now. When the last blow strikes her, she starts believing she may actually succumb to insanity. Paranoia reaches new highs as Nichole believes her two best friends are out to get her and lock her up.

The characters in this book are wonderfully written. You will love Nicole and Truman, and hate the correct people by the end of the book. Everything falls into place as it should. The book, I believe, handles all of the "adult" situations very tastefully. We as adults know what is happening, but the author does not need to boost sales with trashy sex scenes. The quality of the storyline will do that for her.

I, as a reader of mostly fantasy, found myself lost in this real world book, and loved every second of it. I wanted to cry when Nicole did. That is a sign of incredible writing. Do yourself a favor, and get a copy of the book."

5 Stars - A Recommended Read
by CSRP
"The View from Here by Rachell Howzell was an intriguing read. It kept my attention from beginning to end by taking me through a few emotional states. I found myself up at 1 am with tears rolling down my cheeks sad but still unable to put it down. I could relate to the main character; Nicole, on a number of occasions. I enjoyed going through this journey with her and getting to see how Nicole made it through it all in the end. This is one of very few books that could keep me up and reading on regardless of the fact that 2:30 am was fast approaching and my two girls would hold no mercy on me when they awoke at the usual 7am. This is a recommended read!"

The View from Here focuses on the beauties and hardships of marriage;  the betrayals and promises made between husbands and wives; and the  grief of one woman haunted by secrets.

Nicole Baxter has always  tried to control every element of her life, but that control is slipping  away. She has issues. Abandonment issues. Marital issues. Conception  issues. And she thinks her house in the hills is haunted.  It doesn't  help that her husband Truman spleunks and climbs, making her worry more  with each adventure he takes. As the two grow apart, Nicole  makes  decisions that may ultimately shatter her fragile marriage.

Her  life changes on the afternoon she receives a phone call from the harbor.  During a scuba dive, Truman disappears. No one—not his diving  instructor, not the Coast Guard—can find him. Is he still alive? Or  is grief making her believe the impossible?

Excerpt from The View from Here:
2
As I entered the office, Lori Tremaine, Ph.D. stood from her high-backed leather chair to shake my hand. “Nice to meet you, Nicole. Glad you could come.”

I forced a smile and assessed the woman’s handshake: limp. And: glad you could come? As though she was hosting a Tupperware party. Or a wake.

I settled into a guest chair.

“So, Nicole,” Dr. Tremaine said, sitting behind her desk. She opened a manila folder that contained two sheets of paper, then, glanced at me. “Why are we here today?”

“Let’s see...” The psychiatrist returned her attention to the folder’s contents. She pulled out the second sheet, then slipped on a pair of emerald-colored reading glasses. “It says here…” She read in silence for a few moments, then said, “Nothing much. Just a note that says, Talk about the house.” She peered at me over the top of her frames. “Does that mean anything to you?”

I shivered, then offered a curt nod.

Dr. Tremaine closed the folder, and said, “Don’t feel pressured to talk about that, though. We can discuss other issues first to become better acquainted. Tell me about your family life.”

“I’m here because of my family life.” I paused, then added, “Kind of. And it’s related to the house.” I scratched my nose and stared at the wrinkled lip prints on Dr. Tremaine’s cup. “Not just my family life now, but also my childhood… Not that my life now isn’t affected. Because it is. But my life then—that’s not the primary reason I’m here. Although…” Lost and nervous, my right foot bobbed up and down as though it generated electricity for the lights and computer.

“Okay.” The woman slipped off her glasses, then sat back in her chair. “We can talk about whatever you want.” She reached for her coffee cup and sipped.

“I don’t mind at—” Dr. Tremaine took another sip of coffee, but didn’t place the cup back on the desk. She smiled at me with coffee-stained teeth and lips uneven with color. “You start then.”

I nodded, then shifted my leg so that the other foot could pump. “This will sound weird out of context, but…” I swallowed, then said, “My house is haunted... I think.”

As though those two words of uncertainty negated the heretical “house is haunted.” Because hadn’t I learned in church? The dead can’t haunt. They lay in their graves, awaiting the return of Christ so that they could either be caught up in the clouds or banished to Hell. For the living know that they will die, but the dead know nothing. Nada. Zilch.

Truman and I had visited a so-called “haunted house”—an antebellum Victorian wasting away in the bayous of Louisiana. We had listened to the Cajun tour guide whisper about the souls of runaway slaves trapped there, and about cold spots and mysterious crying, about pictures that, when developed, came out as blurry spots. “Ghosts,” the Cajun had said with a certain nod. And we had shivered in those cold spots and had heard the crying of tortured slaves and had taken pictures of creepy Spanish moss hanging from moaning oaks and had glimpsed the empty bedrooms where little white children and their mothers had died from consumption, and we had had our film developed and had noticed the blurry spots in each shot.

“They’s ghosts,” Truman had said in a Southern accent. Then, we had laughed and had placed those photographs in our travel diary alongside pictures of the Eiffel Tower and the Mayan ruins.

Saying “haunted” to Dr. Tremaine discounted everything I religiously believed. Aunt Beryl had never wavered from her strict understanding about the Dead’s state, never telling me once that my Mom and Dad were watching over me in Heaven—even though the Heaven story could’ve offered a lonely child comfort, and kept her from visiting the dungeons of her imaginations. But my aunt didn’t play that. She had scolded me the one time I had joked, “My mom is rolling over in her grave.” And now, to utter this “haunted” heresy aloud, and to a stranger?

Aunt Beryl was probably rolling over in her grave.

In my profession, I showed restraint in the words I chose. Sorenifib may help prevent some kinds of kidney cancer. Because my writing had to remain hyperbole-free, my natural inclination to over-exaggerate and overstate eked out in other ways.

My house is haunted.

Not My house is noisy.

Not My house is too cold and makes strange sounds.

Again: not that I believed (religiously) in “haunted” anything. And no one had died in our house. The previous owners had suffered a huge loss once their dot.com fortune dwindled and the bank foreclosed. Their American Dream had died, but Carl hadn’t hung himself from a ceiling beam in the living room; and Yvette hadn’t slit her wrists in the master bathroom’s sunken tub. They had moved to Miami to teach graphic design to senior citizens.

But once we had moved in, I realized that the house was too big, and had too many hallways, doors and walls. My voice echoed in the quiet on one day, and on the next, it didn’t carry at all. The stale stink of cigarettes inhabited the guest bedroom even though neither Yvette nor Carl had smoked. Long shadows in the living room threatened to swallow me if I wandered too close. And the grumble of the foundation steadying itself on the hill sounded too deep—as though construction had originated in Hell.