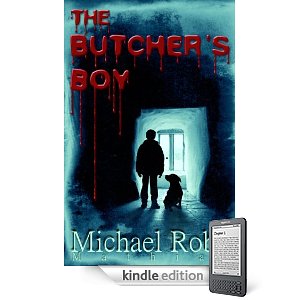 "The Butcher's Boy is not a book of immediate horror and gore, but a slow building up of the terror. However, it isn't your classic scary home ghost novel. Twists in the story pleasantly surprised. Overall, its excellent."
Michelle, Goodreads Review

"WOW! This is the kind of thriller I love to read. The Butcher's Boy sinks it's teeth into your mind and pulls you into the story. It's one of those books that you can't put down..."
Amazon Review

"This book is not your typical horror story. The author's work can be compared to Stephen King and Dean Koontz. Like their books, this plot takes you to unexpected places..."
(Amazon Vine Voice) Readers Favorite Reviews

Book Excerpt from The Butcher's Boy:

“A man killed his whole family here, in this house, and then tried to burn it down,” she told Michael as she scooted closer to him and Lucy.

They were sitting on the big sofa in the living room. A corny old movie was playing on the television, but neither of them was watching it all that closely.

Maggie had been debating telling him about the house. She would have mentioned it on her first night of sitting if her mother hadn’t asked her to not say anything. Maggie’s mother, who was also a nurse at the hospital where Michael’s mom worked, hadn’t told Janet about the murders either. Seeing Michael’s sudden expression of transfixed horror, Maggie quickly added:

“They rebuilt it, of course. It’s not like this is the same house or anything.” She wasn’t sure how true that part was, but it seemed to relieve Michael a little bit. She liked him, and she liked the job. She didn’t want him telling his mom that she had scared him to death. “They executed the killer. Someone did a report about it when I was in high school.”

This was Maggie’s second evening babysitting Michael, and until this very moment she had liked it here. Now, since she had actually started listening to Michael and his ghost story, she found that she was feeling more than a little uncomfortable. One of the children who had been murdered in the house had been a boy named William Buxly Junior. The school kids had joked about the ghost of Billy Buxly as long as Maggie could remember. They came down here on Halloween and snuck in the house almost every year that it was vacant, which was most of the years she had been in school.

She wouldn’t quit babysitting Michael, though. Since her mother worked with Michael’s mom, she couldn’t. Besides that, she needed the money. Forty bucks a night for just hanging out with Michael was a great deal, but if she saw a ghost, or heard just one strange voice, she was out of there.

Lucy wiggled out from in between them and went to the back door. She made a prancing circle and Michael got up to let her out to pee.

“Was there a boy named Billy killed here?” Michael asked as he returned to the sofa. “I bet the old newspapers would say.”

“Yeah, there was. The killer was William Buxly and his son was most likely called Billy. It’s weird.” Maggie shivered.

“Our cable just got hooked up yesterday,” said Michael. “After I finish setting the router up I’ll be able to get online and find out all about it.” Michael sounded excited. “I bet I could…” His voice cut off when a sudden peal of barking exploded from outside. Someone, or something, was in the backyard and Lucy didn’t like it.

Oh God, Maggie thought. “Michael, what is it?”