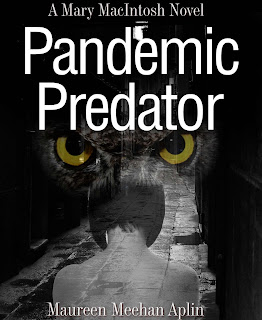 When Ana Bontierre’s lifeless body is found in the center of a medicine wheel in the mountains of northern Wyoming, authorities initially believe that she was raped, beaten and left for dead. But after she bleeds out and dies on a hospital gurney, doctors determine that she was infected with a lethal strain of the avian flu. Within weeks, similar outbreaks occur in Hong Kong, Bangkok, and other metropolises leaving thousands dead, and leading virologists from the Centers for Disease Control, World Health Organization and FBI on a wild goose chase. Eventually, they discover a pattern to the outbreaks—a serial killer is on the loose with an insatiable desire to kill.

Pandemic Predator, a Mary MacIntosh novel
Maureen Meehan Aplin
Copyright 2010 Maureen Meehan Aplin
Chapter 1
Her twenty-year-old body lay twisted in the center of the Medicine Wheel—a circular alignment of rocks on the western peak of Medicine Mountain in Northern Wyoming. Her long, thick, dark hair was matted to her scalp, caked with coagulated blood and other bodily fluids. It appeared that she had been raped and tortured for days before being set free from torment. Her lips, which had once been luscious and full, were grimy and speckled—as if she’d been forced to drink a cocktail of ground coffee and mud. Her face and neck were covered in odd-shaped, purple bruises, giving the impression that her ruptured blood vessels were desperately trying to escape the horror. Even her skin looked like it had attempted to detach itself from the bone. Yet, she was still breathing.

Two rangers from the United States Forest Service found her ravaged body sprawled on the twenty-eighth stone spoke of the Medicine Wheel. At first glance, they assumed that she was dead. As they approached, they noticed her chest cavity propelling out and heaving in, like a fish suffocating on air. The rangers felt for a pulse, but her veins collapsed and formed bruises the moment they applied pressure. They tried to perform CPR on her, but as they compressed her chest, thick, black mucus spewed from her mouth. They rushed her down the mountain to the nearest hospital in Sheridan, and hurled her onto the first gurney they could find in the emergency room. Nurses and doctors scrambled to find a vein strong enough to accept an IV, but their attempts were futile. The victim’s veins wiggled and collapsed like overcooked spaghetti. Blood was seeping from every orifice of her body. Without an IV, she would soon die, but no vein would hold steady. She coughed a few times—a choking, gagging cough like that of an asthmatic—and when the chunk of a clot oozed its way from her mouth, she appeared to have a reprieve. But the relief only lasted a few seconds before the gagging started again.

Her pupils were dilated and her eyes, although still open, were vacant. She coughed viciously again when the doctors attempted chest compressions. She felt the rough hands of the doctor pushing hard on her sternum, but his efforts did not help her capture any air. Instead, she felt like she was swimming in a sea of mud and that someone was holding her under. She felt the cold blade of scissors cutting her clothes away from her body and heard a woman’s voice.

“We’re losing her, doctor. BP’s down to sixty.”

The girl heard metal clanging on an instrument tray and felt another cold sting, this time in her foot.

The girl could not hear the nurse anymore. Noises faded out, but a light shown in. The girl felt an overwhelming sense of warmth and calmness, and felt herself moving closer to the light. Her legs felt like they’d grown wings—butterfly wings—a beautiful shade of lapis. The light filled her up entirely. She did not hear the high-pitched beep.

“We lost her,” the doctor said, deflated. “She’s gone.” He turned away, his head bowed, and without looking at her face, tore off his surgical mask. His oldest daughter was about the same age as this girl, and she also had long, dark hair and large, green eyes. It was harrowing. He took a deep breath, trying not to imagine what had happened to this lifeless young woman. Within fifteen minutes of arrival, she laid dead, parts of her intestines disgorged on the ground beneath the gurney. Behind a plastic curtain in the emergency room of a hospital in a small, quiet, western town, other medical personnel shook their heads and wiped their eyes, for they didn’t fail many young people. And this young woman didn’t stand a chance. All the medical training in the world could not have saved her, yet they all felt like they had done nothing to help her. They couldn’t. Her body was not capable of accepting aid.

The attending physician was Dr. Jonathan Rowe, a thin, forty-seven-year-old man with a deeply receding hairline and thick, frameless glasses. Dr. Rowe, who looked as capable of holding your confidence as well as saving a life, called the sheriff and explained that he had a mysterious death on his hands. The sheriff responded immediately. Mysterious deaths were uncommon in his small town. Sheridan, nestled at the base of the Big Horn Mountains in northeastern Wyoming, is quintessential Old West with a contemporary veneer and an entire downtown area declared a National Historic District. Cowboy fights and drunken brawls were common occurrences on any given Friday night, but the cause of such skirmishes was usually too much alcohol or a cheating lover. The sheriff wasn’t accustomed to the term, “mysterious death.”

The pathologist met Dr. Rowe and the sheriff in the emergency room. Dr. Rowe suggested awkwardly that the girl might have been raped, based on the bruising and blood between her legs. But the pathologist quickly concluded that he would be unable to determine cause of death without performing an autopsy. It was agreed that an autopsy would be ordered, but the sheriff wanted to notify next of kin first. Who was this girl? No one at the hospital could identify her. Whatever trauma had caused her death distorted her looks beyond recognition.

As the pathologist made notes, the sheriff, a medium-sized man in his mid-fifties with a pot belly, handlebar mustache, and ruddy cheeks, looked over his shoulder anxiously. The sheriff, who had attended to many car accident victims in his day, disliked being stared at by the dead. He reached over and lowered her eyelids.

“Please don’t touch her,” the pathologist said in a curt tone.

“Sorry. I just hate looking into dead eyes.” The sheriff rubbed his own tired eyes before noticing that he had some of the girl’s blood on his hand. He groaned in a low tone and excused himself to go to the restroom to wash his hands. When he returned, Dr. Rowe and the pathologist were discussing possible causes of death in a hushed tone. The sheriff paced the floor, waiting for the doctors to include him in on the conversation. Dr. Rowe kept his back turned from the sheriff, hoping that he’d take the clue and allow them a private conversation.