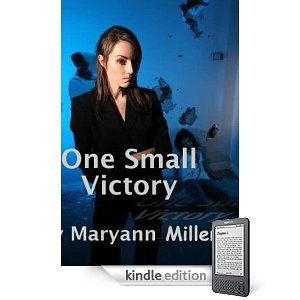 “One Small Victory is great Romantic Suspense and a read you won't want to miss.”
—Victoria Kennedy, Midwest Book Reviews

“One Small Victory is not for the faint of heart, but it is an excellent, well-crafted novel. The tension is all pervasive, and heat, rage, sorrow, despair, and all-enveloping terror fill every page.”
—Carolyn Crisher for Romance Reviews Today

“The resolution of these {personal} threads is most satisfying, in that they aren't neatly resolved, much like real life. The undercover side of One Small Victory is exciting and fast paced."
—Larry W. Chavis for Crime & Suspense

"One Small Victory is an engrossing suspense thriller with a hint of romance that is intelligently kept very minimal and mostly off page."
Harriet Klausner for Amazon.com ***** FIVE STARS

“One Small Victory is an amazing, heart pounding, emotional tale about one mother's love of her children, and the steps she takes to protect them from harm.”
Jennifer Lawrence for Amazon.com **** FOUR STARS

Life can change in just an instant. That's the harsh reality that Jenny Jasik faces when her son is killed in an automobile accident, but never in her wildest dreams did she ever expect to be working undercover as a member of a drug task force. She is, after all, just a mom. But don’t discount what a mom can do when the safety of her children is at stake.

Book Excerpt from One Small Victory:

The car hurtled through the darkness as the wind whipped through the open windows; a cold lash against his warm skin. Mike braced his feet on the floor and fought a rising sense of panic.

How fast are we going? He snuck a look at the speedometer. Holy shit! The needle inched toward a hundred and Brad showed no sign of slowing. Do I dare ask him to stop acting like Mario Fucking Andretti?

Mike took a deep breath. “Aren’t you afraid of getting stopped?”

Brad glanced over with a cocky grin. “Are you?”

“No big deal, man. Just thought you might want to hang on to your license.” Mike wished he had the guts to say aloud the thoughts that whirled through his head. He was scared. And he wished Brad would slow down.

“You need to chill out.” Brad took the joint out of his mouth and offered it to Mike. “This is excellent shit.”

Mike pushed his friend’s arm away.

“Hey, what’s the deal?” Brad took an angry toke. “You weren’t passing it up last year.”

“I only did it so you’d get off my ass.” Mike paused to gauge Brad’s reaction. “Besides, the thrill escaped me.”

“That’s ‘cause you never gave it a chance.” Brad took another long drag. “You got to build yourself wings before you can fly.”

Brad laughed, and Mike couldn’t resist the urge to join him. That was the deal with Brad. Life was just one big joke—his reasoning for doing dope in the first place. Why shouldn’t they have a little harmless fun before they settled down to serious living? So Mike had let Brad talk him into trying the grass at Dempsy’s party last summer.

After the first hit, Mike had waited for some effect, but nothing happened. So Brad told him to take another. Deeper. Hold it longer. That time, Mike thought he’d cough a lung out before he got around to enjoying any benefits of the grass.

Mike didn’t care that Brad used dope. It was his life and his business. But now, as Brad’s red Trans Am screamed along the narrow country highway with Mike clinging white-knuckled to the ‘aw-shit’ handle, it wasn’t just Brad’s business.

The tires screeched as the car careened around a tight corner. The stench of burnt rubber blew in the open windows, and icy fingers of fear crawled up Mike’s spine. “Why don’t you ease up,” he said.

“The gas and the goods.” Maybe if it sounded like a joke Brad would take it better.

“I got it under control.”

Mike wanted to believe him. They were friends. Brad wouldn’t do anything to hurt him. And there was hardly any traffic way out here in nothing-land. What could happen?

Mike looked out the front window to see a tight curve looming at the farthest reach of the headlights. “I don’t know.” Brad had slowed, but not enough in Mike’s estimation.

“Didn’t Butcher do it at fifty?”

Panic stabbed Mike’s stomach and he glanced quickly at his friend. “Come on Brad. Don’t even try it.”

Mike gripped the door handle as the car barreled into the curve. Even without his hands on the wheel, he felt the car slide as the rear tires lost traction. He didn’t know whether to pray or to scream.

At the precise moment Mike thought they’d careen off the edge of the road, the front wheels grabbed the asphalt. The car blasted out of the curve like a cannonball. Brad looked over with a triumphant grin. “See. I told you. Fifty-five.”

Before Mike had a chance to let out a breath of relief, a violent thump threw the car out of control. The vehicle slewed back and forth, and his head banged against the window with a painful thud. A sense of dread buffeted him like a blast of frigid air.

“What was that?” Brad asked.

It wasn’t a question that needed an answer. He watched the muscles in Brad’s arms strain to gain control of the steering wheel. What the hell had they hit? He braced one hand on the dash and the other on the seat and twisted to look out the back window. Darkness swallowed the world.

Then he heard his friend shout, “Oh, shit!”

That’s when the car went airborne.

It seemed to float, and for a fraction of a second Mike found it almost a pleasant feeling. Brad was right. They were flying, and it was fuckin’ awesome.

The weight closed in on him. He couldn’t breathe. He tried to reach over to Brad but his arm wouldn’t move.

Nothing moved, except the pieces of metal twisting and gouging at him.

Suddenly everything was still. Blessedly still, and Mike was glad it was over. Then a great wall of blackness rose up before him.

It moved slowly at first, then gained momentum as it enveloped the twisted interior of the car. It reached up to dissolve the shattered windshield and snuff out the pale moonlight.

In the dark void Mike felt the liquid blackness crawl up his mangled body until it covered him like a heavy blanket.

Life can change in just an instant.

That thought wove its way in and around her mind as Jenny fingered the clothes jammed along the wooden rod in the closet. His funny T-shirts promoting the likes of “Prince” and “Dilbert.” His one good shirt, only worn under duress. His leather jacket that still carried a faint aroma reminiscent of saddles and horses.

Sometime soon she’d have to clean out the closet. Isn’t that what usually happens?

Tears burned her eyes and she turned away. She didn’t know what was supposed to happen. No one had ever told her. And a multitude of questions swam through her mind like restless minnows in a pond.

There were books on choosing a college. Books on how to plan a wedding or how to help your child find a job. But no one had ever written one on what to do when your son dies.

Thus begins what is a mother’s worst nightmare, the loss of a child. For most women, that loss would hold them in a grief so pervasive they couldn’t function, but Jenny Jasik doesn’t give in to the paralysis. After discovering how rampant drugs are in her rural Texas town, she bullies her way onto a Drug Task Force and works as a confidential informant to help bring down the main distributor. This isn’t done without considerable risk, not only to her safety but to her sanity and to the sanctity of her family.