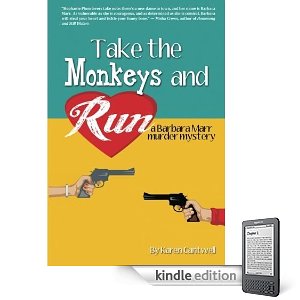 Take the Monkeys and Run (A Barbara Marr Murder Mystery)

"This fun if light novel’s quippy, hilarious narrator, Barbara Marr, has so much warmth and genuine gumption, you’d certainly want her on your criminal investigative team. The spunky Virginia housewife and mother of three is almost at the end of her rope — her hunky husband, Howard, has left her; it’s her 45th birthday; and she’s just discovered three monkeys living in the trees in front of her house. “Life was pretty sucky” as she puts it. But while investigating the curious case of these monkeys, a bit of unexpected adventure shakes things up just the right amount. In a warm-hearted, deftly observed comic-farce-meets-mobster mystery, Barbara and her friends from her quiet suburban neighborhood, Peggy and Roz, stick their noses into the business of a deserted house down the street and find themselves caught up in some off-the-wall FBI business that hits way closer to home than they could have imagined. Perhaps a bit goofy at times, this is nevertheless an outright treat: diverting, funny and fast-moving."
—Publishers Weekly (This text refers to the manuscript reviewed as a part of the 2009 Amazon Breakthrough Novel Award contest.)

“A semi-finalist in the 2009 Amazon Breakthrough Novel Award contest, Take the Monkeys and Run obviously pleased a few readers. While this is no literary masterpiece, it is essentially well-written with engaging, often larger that life characters, and most importantly is laugh out loud funny.”
—Jenny Mounfield at The Compulsive Reader

“Karen Cantwell's writing doesn't disappoint. The pace clips along and delivers at all the right points carrying us on an internal journey to answer the questions surrounding the crime. If you like a good mystery but want a refreshing new take with a bit of light fare, enough to make you laugh out loud, then Karen Cantwell's Take the Monkeys and Run will take you there.”
—Lee Libro at Literary Magic

Film lover Barbara Marr is a typical suburban mom living the typical suburban life in her sleepy little town of Rustic Woods, Virginia. Typical, that is until she sets out to find the missing link between a bizarre monkey sighting in her yard and the bone chilling middle-of-the-night fright fest at the strangely vacant house next door. When Barb talks her two friends into some seemingly innocent Charlie’s Angels-like sleuthing, they stumble upon way more than they bargained for and uncover a piece of neighborhood history that certain people would kill to keep on the cutting room floor.

Enter sexy PI Colt Baron, Barb’s ex-boyfriend who would love to be cast as new leading man, filling the role just vacated by her recently estranged husband, Howard. When Colt flies in from out of town to help Barb, events careen out of control and suddenly this mini-van driving mother of three becomes a major player in a treacherous and potentially deadly FBI undercover operation. It’s up to her now. With little time to spare, she and she alone, must summon the inner strength necessary to become a true action heroine and save the lives of those she loves. The question is can she get them out alive before the credits roll?

Book Excerpt from Take the Monkeys and Run (A Barbara Marr Murder Mystery):

The sky was black, my toes were numb and I was a lunatic.

Forgetting that our recent October nights had turned colder, I had set out on my mission barefoot. I had no idea what the thermometer said, but the ice cold brick beneath my unprotected feet told me plenty. And my worn-thin-through-the-years knit jammies were certainly no match against the biting air. Evidently I had left my brains in the house along with my shoes and down-filled parka. Indiana Jones, our orange Tabby, followed me and purred while he rubbed against my legs, offering a tinge of warmth at best.

I squinted into the darkness. “Three thirty in the morning. Am I totally insane, Indy?”

“Thanks for the vote of confidence.”

Yes, I’m a grown woman and I talk to my cat. What’s the big deal? My cousin Samson the psychiatrist tells the family I’m delusional and should be medicated. Pshaw I say. Samson has a psychiatrist of his own as well as a far more disturbing obsession with large farm animals, so I severely doubt his legitimacy. As long as Indiana Jones talks to me, I’ll keep talking to him.

My name is Barbara Marr. I’m not a lady coroner, bounty hunter or crime scene investigator. I don’t fight vampires, werewolves or flesh-eating zombies destined to destroy humanity. Even worse, I don’t knit, sew, bake gourmet goodies for sweet English ladies or refinish houses then flip them for a profit. In fact, I lack a veritable encyclopedia of talents and accomplishments. I have managed to give birth to three children, but when my teenage daughter looks at me like I’m an alien from the planet Freak, I wonder at my parenting abilities.

Then of course there is my marriage. Not long ago I would have bragged to anyone about our solid bond. True love. True fidelity and commitment. That was before Howard dropped the bomb and moved out. So perpetuating matrimony can be added to the list of things I don’t do.

When reviewing the list of lifetime achievements for which I am proud, being mother to my three girls sits at the very top, followed by the time I saw Yul Brenner in a convenience store and discreetly let him know he had ketchup on his chin. He was so thankful that he autographed a bag of Fritos for me.And most recently I got familiar with the video camera again and shot a music video with my daughters. We called it Four White Girls Do Madonna. I posted it on You-Tube and got over twenty-five views. It was very exciting. Still, I’m not exactly setting the world on fire.

So when Howard left, I decided it was time to resurrect my dream and write about movies. I love the movies. Old movies, new movies, musicals, dramas, comedies, westerns, action, science-fiction, and anything starring Meryl Streep. Some years ago, in between changing diapers and potty training, I had bought a domain name,

ChickAtTheFlix.com, with the intention of building a movie review website. I kept the domain name, but got side-tracked by little things like ear infections, strep throat, pre-school, elementary school and baby number three. Now, with my life deteriorating before my eyes, the time had come to take the bull by the proverbial horns and start anew.

After putting the girls to bed, I needed a way to keep my mind off Howard. I plotted and planned a grand design. The website would contain reviews of current release movies as well as DVD releases of older classics. I would also have a weekly blog where I waxed enthusiastic on different subjects of the cinema. Since I had just recently watched a Men of Mystery Film Festival on the Classic Movie Channel, my first blog title would be, “Charlie Chan or Sherlock Holmes? Whodunnit Better?”

At two a.m., I was too tired to think about the website, but too upset about my marriage to sleep, so I turned on the TV. Movie fare included The First Wives Club, A Bill of Divorcement, An Unmarried Woman and The Breakup on HBO. Disgusted, I turned off the TV, turned out the lights and contemplated learning voodoo so I could hex Howard with a festering urinary tract infection.

By three a.m., I had been crying for at least twenty minutes when I heard the rumble of a truck outside my bedroom window. Suddenly, I had something else to occupy my frazzled mind. The truck was back at House of Many Bones.

And that was how I ended up outside on a cold, fall night with no shoes on.

Become a Kindle Author sponsor.
Posted by kucinx at 11:58 PM