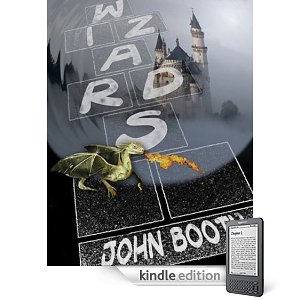 Light, Lyrical, and Lovely
"Author John Booth writes with a light touch, so gentle you barely feel his presence. I've enjoyed his short stories on FaceBook, and eagerly jumped into his first novel. It was a return to childhood. Wizards is a book meant for the end of the day. You should be wearing your pajamas and sipping a glass of your favorite wine. When I began the book I assumed I was entering the world of Young Adults, but Booth has slipped in snips of light erotica as seen through the eyes of his teenage age protagonist, Jake Morrissey, a wizard with an eye for the ladies.

"Fluffy, the centerpiece of Jake's world, is a dragon raised from an egg by the young wizard. Together, they're able to travel to other worlds via a magical version of hopscotch. Jenny is Jake's love interest, but Esmeralda, princess of Salice, arouses his teen hormones. I particularly enjoyed Booth's attention to practical details like broomsticks being too uncomfortable to fly Harry Potter style, and the baby Fluffy bonding with Jake when he accidentally mimics the first sounds between mother and infant dragon. The book paints many lovely, lyrical scenes... when Jake visits Salice, when Jenny first meets Fluffy, and when Jake shares his world with Jenny. This is a book to read as if you are a child at heart—because most of us still are."
— Barbara Silkstone

Perfect Present for older teens...
"John's style of writing is highly entertaining and Wizards would make the perfect present for the older teenager in your life. In fact I will go so far as to say that you will probably be fighting over who gets to read it first!

"Jake is a kid when he discovers that he can use Hopscotch to jump to different worlds. And that he can use the same power to find people. So, when at eighteen, he is asked to find Jenny, he agrees reluctantly. Within a few months all hell has broken loose and not just because of his unusual pet!

"Wizards is an entertaining, funny, light-hearted and serious look at growing up into your own powers, be it mind, magic or muscle, something that many teenagers will be able to empathise with."
—Tiger Princess

Nice YA fantasy
"I was introduced to this author's work from a friend of a friend when he posted it on FB. Even in its raw state, I found it hugely entertaining.

"Now that I've been able to read his published account, I've found it even better. This is YA and there's no way anyone can forget that while reading, so a purchaser needs to keep this in mind. It's also suitable for children—IMO 8 and up. They will be happy to follow 18-year-old Jake and Fluffy along as they travel worlds, meet princesses and consort with dragons, all great ingredients in this shepherd's pie of entertainment. As a 47 year old reading this, I enjoyed it just as much—the adventures remind me of Wind in the Willows and is the kind of book I would pick to read to my grandkids or give as a gift.

"I am also happy to see a quality read here, which I have to say is unfortunately not always the case with ebooks. I couldn't find a typo or grammatical mistake.

"This author has tremendous imagination coupled with an ability to make it come alive and seem realistic to his readers. If stars could be given on imagination alone, he would easily get a ten out of ten.

"My only wish is that this were illustrated. If so, it would be an amazing ebook. As it is though, this is quality stuff."
—Paul Neto "Tinman"

Jake has a secret hidden in his bedroom, under the carpet. It is a game that every child knows and plays. But for Jake, there is one small difference. This game takes him to strange and wonderful worlds. He calls it hopscotch and it helps him find missing people. It helped him find Jenny.

Jake is a wizard but he doesn’t have a clue.

But that’s not all; Jake has yet another secret, hidden away in the attic. It’s an accident, a strange object from another world. Jake has forgotten about this secret, but that’s all about to change. Because this secret is about to hatch!

Jake is a wizard and his life is about to get interesting.

Fluffy, my pet dragon, was pacing the Bat Cave irritably. There are absolutely no bats in the Bat Cave. I simply called it that because it sounds cool. Nor was Fluffy a good name for a fifteen foot tall scaled dragon with a wingspan of at least thirty feet. However, you have to understand that dragons are born with feathers, little white fluffy ones that fall out about the same time as their eyes open, and that I was a pretty ignorant wizard when I stole Fluffy's egg from his mother's nest.

That was over ten years ago and Fluffy had grown pretty big in the intervening years. Not, you understand, that Fluffy is not beautiful in his own right. All dragons have colored scales and Fluffy's were iridescent as well, predominantly orange, but with patches of yellow that could be easily mistaken for gold. Perhaps that was where the legend about dragons having hoards of gold came from.

My name is Jake and I am an eighteen year old wizard. I discovered my powers when I was seven and have done a good job of keeping them a secret from my parents ever since. Fluffy is from another world, dimension, planet, whatever, that I got to by world hopping.

Hopping was the first talent I discovered as a wizard, how to move between the worlds. Of course, I didn't know I was a wizard then. All I knew was that my solitary games of hopscotch tended to a little on the weird side. If the stone I threw disappeared when it landed, my last hop onto that square would take me to wherever it had gone. It was easy to get back, provided I had chalk with me, as the stone would always return to the square it had disappeared from if I marked up another hopscotch court.

I met a wise man once, in one of those other worlds that told me that was what hopscotch had been invented for, to travel easily between the worlds. Before it had been invented, wizards had needed to draw complex mazes and then walk them carefully. The man had talked a load of bollocks though. According to him, groves of trees could be used for the same purpose, provided the plantings had been properly spaced. How absurd is that?

The other worlds were much more interesting than ours, at least they always seemed that way to a bored child who was never supposed to leave the back garden without permission. I suppose they were safer when it comes right down to it, as I have never come across a ten-ton lorry or a tired commuter in a SUV on any of my travels away.

Hopscotch took me to the top of canyons encompassing fast running rivers, to mighty cliffs with the seas battering against them, to white sand beaches with azure oceans just beyond and to granite mountains whose pinnacles were shrouded in mists. Okay, I admit it, when you travel to other worlds you always end up at an interface point, where land meets the water or mountains break into the clouds. It is part and parcel of the magic.

I rarely saw another human in those early days. Mainly because these places were a little on the inhospitable side (except for the white beaches, and they were remote from any habitation) but also because as a shy seven and then eight year old I was prone to sit close to where I arrived and spend my time watching the sea, mists, rivers and so on.

By the age of eight, I had seen sea serpents at sea from the white beach and giant birds flapping their way across said canyons, but the mountains seemed devoid of life. It seems funny to me now, but I never questioned the existence of the sea serpents or the giant birds. They were just like the pictures in the storybooks my mother bought me, so I just assumed that they were a normal part of real life.

One day when I was eight years old, I hopped and skipped myself to the mountains and it suddenly started to rain. It was a heavy cold downpour and I ran for cover rather than hop myself home. I ran into a nearby cave entrance. It was a little smaller than I was and I had to duck my head to get inside. I considered hopping home when I had time to think, but the rain had washed away my chalk marks outside and it was too dark to draw the court in the cave.

After a while, I got tired of waiting for the rain to stop and walked a little further into the cave. When my eyes had adjusted to the gloom, I realized that there was a faint glow coming from even deeper inside. Thinking that this might lead to a bigger entrance where I could draw my hopscotch court away from the rain, I walked deeper into the cave.

Turning a blind corner in the cave, I found there was a massive natural entrance that looked right out over the canyon. I became scared when I got close to it, because the entrance ended in a sheer cliff wall. Strong winds from the outside buffeted me as I walked closer. The winds were strong enough to make me stagger from side to side, and I felt that if I opened my arms wide I might rise up into the air. I decided to turn around to walk back and that was when I saw the eggs.