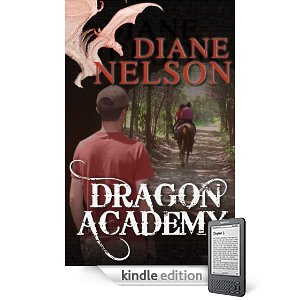 "I had to write a review for this book. It's one of those rare gems you come across and have to share. There seems to be only two genres for authors these days, characterized by Twilight and Harry Potter.

"There are no vampires in this book but it does have similar angst amongst its teen characters, at a younger level. In the vein of Harry Potter, this book is similar in that a teen has to deal with not only complications in maturity but also a mystical element. This book has more of a balance of fantasy to reality seen in the Percy Jackson books, the real world affected by, in this case, dragons.

"Make no mistake, this book stands on its own in being fresh and original. The very likable teens and their academy instructors have depth, defining moments, and growth. I found myself really feeling for them, wanting to intervene, as they made some poor choices. The environment is detailed yet comfortable with just enough quirks to make it believable that dragons could exist in our reality. At no time did I feel I knew what would happen, there were many directions the story could take, and I look forward to seeing where this, (hopefully), series will go.

Just for reference I'm a guy in his (hate to say it) late thirties, so I feel this book can be enjoyed by anyone.

I would ask the author to please add the option of Amazon's CreateSpace publishing, so I can on-demand order a hard copy to add to my collection."
—SCAVOLA

A fun read for all ages

"Action, humor, teenage angst, and, of course, plenty of dragons—this one has it all. And, like a classic action yarn, Dragon Academy isn't just for teens; it will appeal just as much to adult readers. Diane has developed a lively cast of characters that are quirky, entertaining, and downright laughable. From Nick and his thankless quest to understand women, in general, and his not-quite-girlfriend, in particular, to his Uncle Dietrich—the strong silent type—and his Aunt AnnaLise—the less silent, generally excitable type—there's plenty to like. Oh, and did I mention BillyBob and BobbyRay, hillbilly truckers with IQs lower than a snake's belly? PC? Probably not. Funny? Roger that, good buddy.

"Pacing is excellent and dialogue crisp, but perhaps the best part is Diane's writing style—smooth, easy to read, yet packed with action and imagery. Adults won't think it's a young adult novel, and teens will appreciate that Diane hasn't dumbed anything down for them. By the end of the first chapter she'll have you believing there's nothing the least bit unusual about a world with dragons living next door. As an added bonus for horse lovers, Diane's dressage knowledge makes the leap from equestrian to draco handling an easy hop.

"Dragon Academy is a wonderful story, suitable for anyone's fantasy collection, and Diane Nelson is a name I'm sure we'll be seeing more in the future."
—Mark D. Marker (LaGrange, IL USA)

What a great read!

"After having had a chance to read this through, I'm very happy with the purchase and would definitely recommend this—suitable for both adults and teenagers.

"The writer jumps right into the story, and the action and quick paced dialogue keep this moving from the start. I am very happy to see that the usual editing shortfalls so common in all written material today, even among paperbacks and hardcovers, does not exist here—this is a polished piece of work from an obviously established writer. Diane knows her stuff, and it shows.

"More importantly, I as a reader, like realism, especially when it comes to fantasy. It sounds like an oxymoron, but I really have to believe in what I'm reading, and if I don't the author failed. The smart dialogue here, the descriptions of a very real environment we all know, such as this: "The atmosphere shimmered on broil, desert and rock and sand danced in sworls of muted tans and beige, indistinct," helped me to immediately place myself, which made what was to happen next more believable.

"The humour was perfectly applied and also believable, as when Berit's hair was burned off, the rabbits were suffocating and BobbyRay had his little issue with his pants. Not overdone in any way, just entertaining. Diane seamlessly blends genres that would normally be at odds with each other—fiction, science fiction, fantasy, comedy, thriller and spy stuff into something for everyone, and has done it successfully.

"In short, the read is engrossing, funny, sometimes an edge of your seat thing that is ridiculously entertaining. At a time when every penny counts, I (a bit of a self admitted penny pincher) was more than happy to drop my 9.90 for this, and certainly recommend it to all those who also like a good read."
—Paul Neto "Tinman" (Canada)

With high school finished for the summer, Nick looks forward to visiting his aunt and uncle in New Jersey. What awaits him is a heat wave like no other—and the last two Greywings on the planet. Nick has an innate ability to train horses but will he be able to translate his amazing skill to these teenage dragons?

The steaming soup of mid-summer heats up tempers and tests resolve as Nick vies with fellow trainers, Keith and Maxie, for mastery over their new charges. The dragons, Nikita and Michael, typical teenagers themselves, have other ideas.

Nick treads a torturous path through a minefield of competing demands: the expectations of his aunt and uncle, recalcitrant horses, the Academy’s female students and the overwhelming egos of Nikita and Michael. One small mistake erupts into a conflagration that hurls everyone into a race against time and forces of nature.

Nick walked around the small, furnished cottage in a daze. His own space. No overbearing, insane mother to rag on him 24/7. No reminders that his dad had died just four months before.

He took the stairs two at a time. His aunt had cleared out the spare bedroom to use for storage. The one nearest the stairs contained a queen-sized bed, made up with a girly quilt in light apricot and yellow flowers. Nick tried to remember who had lived here since the last time he had visited, nearly three years before.

Nick threw a few things in the closet, washed his face and hands and headed out the door. The sky had clouded over, with cloying humidity and the promise of rain. Nick looked forward to some real weather. Vegas was basically hot and hotter. He was used to that; but the humidity was a nice change of pace, though he might not appreciate it later on as his tee-shirt sponged moisture from the air. He ran lightly up the sloping drive in the gathering dusk.

The barn light sent out a pale yellow glow onto the gravel drive. The night floods hadn’t activated so the mosquitoes and other night flyers had yet to gather at the entrance. Curious, Nick swerved left to see who might be working this late. Normally Juan finished his stable duties by seven o’clock. Maybe one of the students was in to clean tack.

Nick stopped at the entrance. He paused to inhale the acrid scent of fresh shavings and to listen to the munching of thirty equines enjoying their evening repast. AnnaLise would turn them out after dark into the four paddocks scattered about the main barns and indoor riding arena. She liked to keep them in stalls during the day to give them some relief from the flies and harsh sun.

Nick strode in, head down, hands jammed in his pockets, thinking about nothing in particular. Voices echoing down the long corridor brought him out of his reverie.

“If you’d listen to me, you wouldn’t be having so much trouble with your fifteen-meter circles, Maxie.”

“I’m not having trouble, it’s Bini’s stiffness to the left. You know she’s been like that from day one. Even the chiropractor agrees with me. She’s out in C-2 and C-3. I’m trying to do the exercises Dr. Kolter gave me, but it’s not doing much good.”

“You need to be firmer with her. You ride with too loose a rein.”

“I am not hauling on her mouth, Keith. Forget about it. She’s an Arabian. You ask, you don’t demand.”

Nick listened, curious about the argument. He generally understood the gist of the conversation. He couldn’t help knowing something about dressage given Anna and Dietrich’s total immersion in the subject. At the sound of his boots scuffing the concrete floor, the two teenagers whirled to stare at Nick.

Nick couldn’t help staring at the young woman. At five-foot-nine, she looked him nearly straight in the eye. She gave him a dazzling smile with her wide, generous mouth. Stepping into his personal space, she extended a hand. He fumbled trying to extricate his hand from his jeans pocket, then realized it had gone hot and sweaty. Self-conscious, he barely brushed her hand. Her mass of reddish blond hair haloed a round face awash in freckles. He backed away quickly, unsure and feeling oddly queasy, and racking that up to having not eaten since morning.

“Uh, I’m at Ridgewood High. Outside of Las Vegas. I’ll be a junior in the fall.”

“High school? Uh-huh. Maxie here is going to be a senior. She’s over at Moorestown High. I’m going into my sophomore year at Rutgers University. I’m studying with Dr. Sarah Rawlings in the Department of Animal Sciences.”

“So, do you ride, Nick?” Maxie again moved into his personal space. He backed away as far as he could, but she kept pursuing him. His breathing became nervously labored. She smelled like Lexol leather conditioner and sweet alfalfa, and he thought he might fall into her deep-green eyes and never come up for air.

Gulping, Nick mumbled, “Yeah, I’m on the rodeo team. I do some trick riding and team penning. I’ve got two Quarterhorses.”

“Rodeo? Oh, like totally cool. Can you teach me some tricks? I’ve got an Arabian mare and she’s quick as can be. You’ll like her. Do you want to see her?” Maxie grabbed his arm before he could even register her rapid-fire questions.

Keith spoke quickly, “Hey, Maxie, wait up. We have to finish up cleaning tack. Then we have to run through that stuff Dr. Whitely sent along on dragon metabolics.” Keith paused and stared at Nick. “Did you know we have two dragons coming in by special truck? I heard they were stopped near Pittsburgh at one of the rest areas.”

Curious, Nick asked, “Stopped for what?”

“Something about rabbits. Not sure. Anyway they might get here tomorrow or the next day. The construction guys will be here around six-thirty, so if you want to see the new stable Anna and Dietrich converted for them, then come on over. It’s by the arena, over there.” Keith pointed vaguely in the direction of the north end of the indoor arena.

“Yeah, I know where it is.” Nick turned to Maxie and asked hopefully, “Will you be there?”

“Oh yeah, you couldn’t keep me away.” Maxie gave him a finger wave and trotted after Keith as he strode toward the tack room.

Nick watched Keith’s back, feeling a bit disquieted about his bossiness with Maxie. He wasn’t much taller than either Maxie or himself; but he was built like a linebacker with broad, well-muscled shoulders and biceps, a narrow waist and bulging thighs. His unruly, curly dark brown hair hung below his shirt collar. He had alpha male written all over him, but Nick wondered just how much of that Maxie bought. Smiling, he headed for the main house.

Yeah, Jenny Sue was going to get an earful.