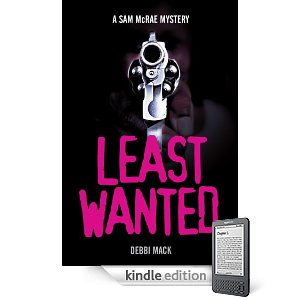 "Sam is a hard-boiled, tough-gal lawyer who helps the downtrodden, and this book is a slam-bang action ride."
Dale T. Phillips' review on One Rounded Corner of the Writing World

"Mack delivers it all. A great story, developing characters, excellent writing and an e-book experience that sets the bar."
Peg Brantley's review on Suspense Novelist

"Spunky and sharp ... if you’re a fan of J.A. Konrath’s Jack Daniels series, this one is for you."
Neal Hock's review on Bookhound's Den

"The snappy dialogue, McRae’s wry sense of humor, the intricate yet solid plot that kept me turning the pages, and characters that I cared about right up to the end — this book has it all. HIGHLY RECOMMENDED."
Karen Cantwell's review on Fiction for Dessert

Maryland lawyer Stephanie Ann "Sam" McRae has two tough cases that quickly turn worse, when both clients—a poor black girl and a white, middle-class man—are accused of murder. Sam's inquiries into the cases lead her to Washington, DC's suburban ghettos where she discovers an odd link between them: the seamy world of girl gangs and computer pornography.

The stakes rise considerably as more people die at the hands of a maniacal killer who'll do anything to keep Sam from learning the truth. Sam races to clear her clients before she becomes the next victim.

CHAPTER ONE
Shanae Jackson breezed into my office like she owned the place. Not even a knock or word of greeting. Pint-sized and wiry, in jeans and a plain orange T-shirt, Shanae projected an attitude that compensated for her lack of stature.

Her daughter, Tina, trailed behind her. Though she was quite tall for a 13-year-old—taller by a couple of inches than her mother—she slouched as if standing up straight carried too much responsibility. Tina slumped into a chair and began reading a book, while Shanae took the other seat and glared at me.

“Hi,” I said, hurriedly closing out the online research I’d been doing. “You must be Shanae Jackson.”

“You got someone else you meetin’ at two o’clock today?” she asked. Her piercing brown-eyed gaze pinned me to my chair.

“Then I guess I must be.” She spoke in a tone reserved for the village idiot.

I plastered on a big smile and refrained from telling her to fuck off. Standing and extending my hand, I said, “I’m Sam McRae. It’s nice to meet you.”

I half expected another snappy comeback, but she remained seated, looking at my hand like I’d just blown my nose into it. After a moment, she reached out and grasped my fingers.

I risked further sarcasm and turned to the girl. “And you must be Tina. Hi.”

Tina glanced at me. “Hey,” she said, then glued her eyes back on the book.

In contrast to Tina’s slouch, Shanae sat bolt upright, her posture as intense as her gaze. Her abundant hair was plastered back from a dark chocolate face with high cheekbones and angular lines.

I sat down and opened the thin file containing notes of my earlier phone conversation with the angry woman sitting before me.

“Is that the paperwork?” I asked, nodding toward an envelope clutched in her left hand.

Shanae thrust it at me. I pulled out folded copies of the police report and other papers concerning her daughter’s case. Smoothing them out on my desk, I took some time to review them.

“This looks pretty straightforward,” I said. “As I mentioned on the phone, I’ll need to speak to your daughter alone.”

I wouldn’t have thought it possible, but Shanae’s expression hardened.

“Tina is my client. I have to discuss the case with her alone.”

I suppressed a sigh. In juvenile cases, it’s never easy to explain to parents the need for complete attorney-client confidentiality. From the moment I saw her, I knew Shanae Jackson would be no exception.

“I have an ethical duty to keep client confidences,” I said. “Things Tina and I say in front of you are no longer confidential.”

“But I’m her mother.” She stressed the last word, as if I hadn’t heard it the first two times. Shooting a withering look at Tina, she slapped the girl’s arm. “Put that book down, child!” With a grimace, Tina closed the book and set it on her lap.

“In the eyes of the law, you’re another person. I have to ask you to leave.”

“I’ll find another lawyer,” she said, her eyes filled with accusations of my shortcomings.

“You can ask the Public Defender for the name of another lawyer who’ll do this for a reduced fee, but whoever you get will tell you the same thing.”

Still glaring at me, Shanae kept silent. If she thought that look would force me to change my mind, the woman knew nothing about me. Or maybe she resented the fact that, while she was too well-off to get a public defender, one glance at my dinky sublet office and she could see I was no Gloria Allred. I was just another scrambling solo who took work from the public defender’s short list of private attorneys willing to represent defendants on the financial borderline.

“White people,” she said, for no apparent reason.

I didn’t know if she was smitten with her own voice or blamed white people for her lot in life, the rules of professional conduct, or the price of gas. Maybe she was disappointed at my color. For the pittance I stood to earn from this case, I was ready to tell her to find a black attorney.

I considered telling her about my childhood in the Bed-Stuy section of Brooklyn or pointing to the wall behind her at my father’s photo of Jackie Robinson entering the Dodgers clubhouse through the door marked “KEEP OUT.” Not so much to impress her, but to clue her in that she didn’t know jack shit about me.

She grumbled, “This is bullshit.”

I yanked open the bottom drawer of my old wooden desk and hauled out my Yellow Pages, dropping it, with an intentional thud, in front of her. “Here you go,” I said, flipping to the attorney listings. “Call anyone. And be prepared to pay dearly for what they have to say.”

She pursed her lips and continued to give me the evil eye. But she knew I had her. “Fine,” she said. Grabbing the large black purse she’d parked next to her, she shot to her feet as if the chair were on fire. “I need to do some shopping,” she announced.

I nodded and smiled, like I gave a damn where she was going or what she intended to do. “This shouldn’t take more than an hour.”

“Hmmph.” She turned toward Tina. In a stern voice, she said, “You behave. And answer Ms. McRae’s questions, you hear me?” Over her shoulder on her way out, she tossed the words, “I’ll be back.”

Sinking into the chair like a deflating balloon, Tina’s elbows jutted over the armrests as she crossed her arms. Her blue-jeaned legs waggled, signaling boredom. I could see the outline of rail-thin arms and bony shoulders under the loose-fitting pink sweatshirt that swallowed her frame.