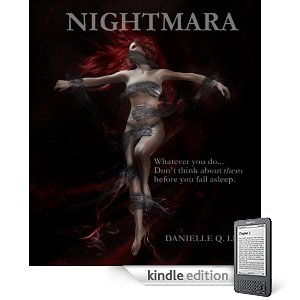 "Danielle Lee takes you on a ride with twists and turns that'll keep you guessing and hanging on to your seats till the very end!"
Brandib, Amazon review

"There were a lot of cliff-hanging moments between chapters and story lines. And it kept you guessing until the very end."
Jills, Amazon review

"Danielle Lee takes you into the realm of the unknown...and makes a believer out of you."
Linda Messner, Amazon review

"The story was great, everything flowed together smoothly and with it shifting to different character views it gave me an added feel of suspense like I was watching a movie and it kept me wanting to flip the pages to find out what would happen next."
Alina, Amazon review

“Whatever you do, don’t think about them before you fall asleep.”

After Grayson Castle is kissed by a beautiful and mysterious woman at a night club, he soon discovers the true meaning of fear. Plagued nightly by what he believes to be a terrifying curse, he seeks professional help from Dr. Zoe Alexander.

Convinced it’s nothing more than sleep paralysis, she disregards his experiences as merely a hallucination—until they come after her.

Based on a true phenomenon, Nightmara explores what horrors may lie between sleep and awake.

Darkness had descended on the city hours ago, leaving only the streetlights to illuminate the black fabric of universe that hung overhead. An occasional honk or barking dog can be heard, but otherwise, a hush of eerie silence drifts over the community like a dark fog.

Moving through the lonely streets, left abandoned by the endless activities of the day, an impromptu ghost town is born by the setting of the sun.

While most of the population had closed their eyes and succumbed to the call of slumber hours before, one particular bedroom window remains brightly lit.

Entering the tiny apartment, it looks like any other messy bachelor pad.

A second-hand couch stares blankly across the living room at an extra large television while a mystery plant dies of dehydration in the corner. Tonight’s dirty supper dishes, along with yesterdays, lie abandoned on a rectangular coffee table.

Stacks of unopened mail are left strewn upon the matted beige carpet which is in desperate need of vacuuming.

The bathroom is littered with the remnants of the week’s laundry and the hallway devoid of any pictures except for one that clings precariously to the corner of the tilted frame.

From the outside, it was a home like any other…except for the bedroom.

Approaching the plain white door, a glaring light escapes from the small crack at the bottom. On the other side of the door, only a light whispering can be heard penetrating the silence of the apartment.

Several dead bolts decorate the inside of the door even though he’d learned long ago that no amount of locks can keep the creatures out.

Plugged into every available outlet within the little room, nightlights and lamps of all shapes and sizes drown out every possible shadow.

Strategically built wooden boards form a barrier around the base of the queen-sized bed. It was simply too frightening to climb in and out of the bed with the dark space underneath threatening to grab his ankles at any moment.

A lone dresser sits unrecognizable at the far end of the room. Beaded rosaries drape over the semi-open drawers while a tiny statue of Buddha grins from his perch atop the dresser. A miniature nativity scene, depicting the birth of Jesus with his human and animal onlookers, occupies most of the space on the left side of the dresser. A lovely bust of the Virgin Mary wears a Mona Lisa smile next to a large silver menorah, all its candles lit and flickering with every breath of air that nears it.

A crucifix hangs beside a large amulet of the Star of David; both keeping a watchful eye over the young man as he reads from various bibles and religious scriptures. The words of King James, the Kabala and the Quran are amongst the rows of sacred literature decorating the bedroom floor.

Kneeling before the shrine in the corner of his bedroom, the young man shivers as psalms and verses pour rapidly from his trembling lips.

His forehead beading with sweat, he glances around himself every few seconds. Palms pressed together, he ignores the pain of the fresh bruises on his wrists and ankles and rocks back and forth as he prays feverishly to any deity that will hear him…and protect him.