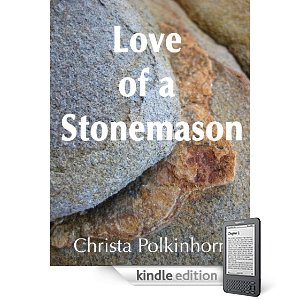 Love of a Stonemason

The book has received eight 5-star reviews, among others:

"Christa Polkinhorn's debut takes the reader on a journey of the heart across several lands. Vivid portraits of Europe and South America will sweep you to those exotic locales and have you experiencing the vibrancy of different cultures. But the heart of the story is the love between a man and woman, with all the challenges and triumphs, successes and failures, as well as the creative journeys of the two main characters. Highly recommended."
Scott Nicholson

"Love of a Stonemason gives readers Europe and South America. A few examples: the Nordfoehn, a dry northern wind; the turning of the seasons in Switzerland; the look and feel of Toro Muerto, a mysterious South American site containing hundreds of carved rocks. Descriptions are vivid without being overwritten. Christa Polkinhorn makes me feel as if I know these places where I have never been. But my enthusiasm for the novel goes beyond its very considerable achievements in description. I like Karla and Andreas, the main characters. I can imagine having dinner with them, drinking wine with them, sharing conversation. They are GOOD people. Not goody-goody types or one-dimensional caricatures of virtue, but decent people yearning for satisfaction in both love and vocation. These two artists are falling in love. I am glad to be sharing their journey."
Lindsay Edmunds

"For me, the best of this book was the artistic journey through Europe and beyond and the author's genuine understanding of what it is to be an artist."
Daphne Coleridge

The young painter, Karla Bocelli, is no stranger to loss. When she was five years old, her mother died in a car crash in the south of Switzerland. Her Peruvian father lives at the other end of the world, and a year ago, her aunt and guardian passed away. Now, at age twenty-four, Karla almost gets hit by a speeding car. As if this wasn’t fateful enough, Andreas, the driver, turns out to be a sculptor and carver of tombstones. In spite of his profession, Andreas is anything but morbid. Quick-tempered and intense, he exudes a rough-and-tumble energy. After a tumultuous start of their relationship, Karla comes to see in Andreas the "rock in her life," the perfect antidote to her fears of abandonment and bouts of depression. Andreas, however, wrestles with his own ghosts: an alcoholic father who abused him as a child and his own fits of anger. Together, the two artists must confront the demons that haunt them. Love of a Stonemason is a story about the struggle of two artists with their past, their family, their creativity, and their love for each other. Told from the point of view of Karla, it depicts the world through her painter’s sensibility. It takes the reader on a journey full of sights, smells, tastes, and sounds from the south of Switzerland to Italy and the Peruvian Andes.

Book Excerpt from Love of a Stonemason:

The river Maggia on the other side of the street roared with gusto, spilling its waters in swirls and rapids toward Lake Maggiore. The noble chestnut trees in front of the graveyard were in full bloom and their long yellowish catkins exuded a strong pungent scent. Scattered by the wind, the abundant pollen of the male blossoms covered the ground and graves with a film of fine golden dust.

As Karla climbed the few steps to the graveyard, she brushed against an overhanging branch of a wet hazel bush that showered her with a rivulet of water. She spotted two men working on the plot next to her mother’s grave. One of them was in the process of leaving. He loaded a cart with tools and pushed it toward the exit. The man who stayed back was crouching before a freshly planted plot, wiping off what seemed to be a new gravestone. A shock of dark hair hung over his face. When Karla put down the vase with the roses on her mother’s grave, he stood up.

They stared at each other.

“Oh, my god, it’s the woman who jumps in front of moving cars.” A sarcastic smile teased his lips as he glared at her with his green cat eyes.

“It’s the maniac who ignores pedestrian zones. What are you doing here?”

“I’m your local stonemason. I put up one of those.” He brushed a strand of hair from his forehead and pointed at the newly planted stone.

The gravestone stood out somewhat from the others. It was made of polished grey-green gneiss. The top edge, however, was left in its original unpolished shape, giving the tombstone an artistic flair. The text was carved in a simple italic font and the only decoration was a bunch of grapes chiseled into the stone.

“Thanks.” He pointed at the stone on her mother's grave. “Someone close to you?”

“Oh, sorry.” He squinted his eyes and looked at the stone more closely. “That was a long time ago; you must have lost her early.”

“Yes, I was five when she died. A car accident.”

“A car accident? Jesus. Seems to run in the family.”

Karla glared at him. “I don’t think that’s funny at all. You sure have a warped sense of humor.”

“I’m sorry, that was stupid. I didn’t mean it that way. It just struck me as a strange coincidence. I almost ran you over and now … I apologize. And I’m sorry I yelled at you yesterday. I was wrong. I was driving too fast.” He stretched out his arm.

Still angry, Karla hesitated. But seeing his imploring look, she gave in and shook his hand. It was large, but in spite of the rough work his palm felt soft. “It was my fault too. I should've been more careful,” she admitted.

She was struck again by the unusual color of his intense green eyes. They changed from verdigris to shades of blue according to the way the sun touched his face. He was handsome, in a rough kind of way. I’d like to paint him. Realizing she was staring at him, she quickly averted her gaze. A breeze kicked up, buffeting the leaves in the trees and tugging at her hair.

“Look, we started out all wrong. Can we just forget about yesterday? And go out for coffee or a movie or dinner or something? My treat.”

“You sure move fast. Yesterday, you called me an airhead and now you ask me out?”

He gave a guttural laugh. “Well, yesterday was yesterday. I’m glad I didn’t run you over, a beautiful girl like you. By the way, I’m Andreas.”

“I don’t know. I’m really busy this week. I’m preparing for an arts exhibition on Friday, but if you’re interested, here is an announcement.” Karla pulled a card out of her purse and handed it to him.

“Oh, that’s right; you’re an artist. Great, I love paintings. Had to do quite a bit of drawing as part of my training.” He studied the card that showed a couple of Karla's paintings. “Interesting work.”

Karla liked the sound of his voice, deep and throaty, even a little tender, now that he wasn’t yelling or making sarcastic remarks. “So what do you do aside from making tombstones?”

“All kinds of stone work but also some metal sculptures. I just can't make enough money with that kind of stuff yet. So it’s mainly tombstones for a living. Talk about making a living, I better get back to work. I have to plant a few more of these at another cemetery.” He pointed at the gravestone. “Three people died the same week.”

“Oh? Well, you should be pleased.” Karla chuckled.

He raised an eyebrow. “What’s that supposed to mean?”

“Good business for you. More tombstones.”

“And I’m supposed to be the one with the warped sense of humor, huh?” He gave a snort and laughed, then picked up the rag with which he had wiped off the gravestone and stuffed it into the back pocket of his tattered jeans. As they walked toward the exit, Karla noticed his beat-up Fiat parked on the other side of the road.

“Okay, see you Friday.” He lightly touched her arm.

Karla nodded. “Drive carefully. Don't run over any pedestrians,” she called after him.

He turned around and opened his mouth to say something, then changed his mind, shook his head and grinned. He waved at her as he got into the car. The engine started right away this time.

Karla looked after him as he drove away. He must have had his muffler fixed.