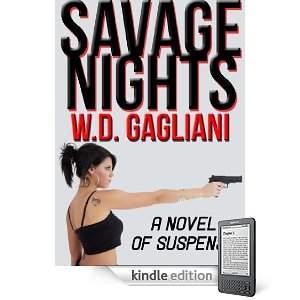 W.D. Gagliani, author of Savage Nights, discusses his book, his journey as a writer, and self-publishing on Kindle.

DAVID WISEHART: What can you tell us about Savage Nights?

W.D. GAGLIANI: I describe it as the Liam Neeson movie Taken on steroids—it’s a lot darker, and—I think—more realistic in parts. Also more brutal. There aren’t too many nice people in it. I consider it a “noir thriller.” (BTW, it was finished before the movie came out…I was devastated to see so much of “my” plot on the screen! But there are some marked differences, including the protagonist’s Vietnam flashbacks and his inconsistent psychic ability.)

W.D. GAGLIANI: I have a plot pretty well worked out in broad brush strokes, knowing where I want it to go but not necessarily always how to get it there. Then I create the types of people I’ll need to push and shove the protagonist toward the climax. I try to differentiate them by giving the reader their thoughts, most of the time, and their sometimes skewed perspective. It’s difficult to give them completely different voices, however, and only readers could tell me whether I’m succeeding or not. I do read some of their dialogue aloud to try and keep their voices distinct in my own ears.

W.D. GAGLIANI: A fan of dark fiction, crime, noir, horror, and thrillers, I guess. Mostly I don’t think of a specific audience, but because I like all those genres, I tend to picture a reader just like me. If I’d like to read it, then I assume someone like me would like it, too.

W.D. GAGLIANI: Long and fraught with rejection. I submitted stories starting in 1976, while still in high school. I sold nonfiction first in 1986, and finally made a pro fiction sale in 1996. Wolf’s Trap, my first novel completed, took nine years to write. I had many aborted starts, beginning with when I was still in grade school. But one must never give up…

W.D. GAGLIANI: I have too many ideas and not enough time. I write down things. I try to prioritize. I have done some collaborations specifically because I can be pushed a bit to work on things if someone else is involved. I have too many burners and not enough stove top! My process is often disjointed because I get distracted away from current projects by new ideas that clamor for my attention. Sometimes I bounce between two or three active projects. I try to write every day, but I can’t manage it many weekdays. I make up for it most weekends. I don’t think I’d set a good example regarding process…

W.D. GAGLIANI: I could write a very long list. I have groups who inspired me: thriller writers, crime noir and mystery writers, fantasy and SF writers, horror writers, and so on. I’ll mention a couple from each group.

W.D. GAGLIANI: The Anubis Gates by Tim Powers (also Last Call and The Stress of Her Regard, by Powers.

I have some ties: The Last Coin by James Blaylock, any of Ian Fleming’s Bond books, Where Eagles Dare, by Alistair MacLean, The Stand by Stephen King, The Talisman by King and Straub, any of Joe Lansdale’s Hap & Leonard books… and so on. I wish I’d written all of those! And more.

W.D. GAGLIANI: With the help of iStockphoto and Steven Booth of GOS Multimedia (www.gosmultimedia.com), who also does my file conversions. I recommend GOS for cover and conversion work—they’re responsive, reasonably priced, and actually care about making you happy.

W.D. GAGLIANI: I’ve followed others’ footsteps into all the various social media, including being dragged kicking and screaming into Twitter, convinced nobody would care what I have to say. But my number of followers keeps growing slowly, so I guess somebody cares… I started with MySpace and went on to Facebook. I’ve done a promotion at Bitten By Books, done some contests, started a couple Kindle Boards threads, helped promote friends’ books, blurbed, blogged, and generally tried to do what people were saying was working for them. It’s not a natural area for me to excel, but I’m training myself. Slowly.

W.D. GAGLIANI: Through Smashwords my work is also available at all other outlets, in all formats. But Amazon’s Kindle was the game changer. I’d played with a Rocket E-Book Reader ten years ago and published my first story collection as an e-book in 2000… but the market just didn’t take off (at least, not for me). I think there were robust e-book sales in some areas, but the Kindle somehow hit everyone at exactly the right time, the right price, right features, and there was content right out of the gate. Lots of it. Like them or not, Amazon drove the new revolution. And they allowed higher royalties earlier than anyone else. They made publishing incredibly easy with their Digital Text Platform (DTP).

There's just no excuse for not dipping your toes in! In fact, I'm also close to publishing a mini-collection of short stories written in collaboration with writer David Benton. Mysteries & Mayhem contains six short stories, four of them previously published and two of them new to the world. It should be out in the next few weeks. And there's a collaborative novel-in-progress that Dave Benton and John Everson and I are working on, as well. We are ebook believers.

W.D. GAGLIANI: I’m old-fashioned enough to think that not everyone can turn out a well-edited, well-structured book. I had a lot of writing experience, a lot of practice and rejection, an MA in writing, experience with magazine and newspaper editors, and a lot of trial and error. I’m not saying it should take a new writer that much or that long, but as long as the agency model exists, it’s probably good to seek some sort of validation there. An agent who loves your work and will help you make it better. An editor who sharpens it. Barring that, a group who can help you improve a manuscript until it’s publishable. But in the end, I don’t think there’s anything to be lost with putting it out there. If people respond with criticism (of story, structure, or formatting) the book can just be fixed and republished… so, why not try it? Improve it as much as possible, have it read by a few people whose opinions you trust to be honest, revise, retry the group reading, and then go with it. Be flexible. 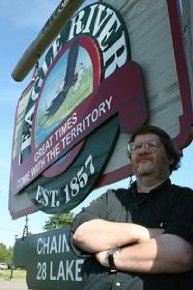 W.D. Gagliani is the author of the horror/crime thriller Wolf’s Trap, a Bram Stoker Award nominee, as well as Wolf's Gambit and Wolf's Bluff (Leisure Books). Wolf's Edge may arrive in 2011. Also the author of the thriller Savage Nights, available for the Kindle and other e-formats. He holds a Master's Degree in English from the University of Wisconsin at Milwaukee, where he also taught Creative Writing and Composition.

He counts music, exotic weapons, and history as special interests, as well as writing about the writing process itself—years ago he wrote "The Writing Life" column for The Iguana Informer.