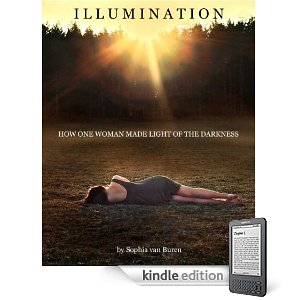 Sophia van Buren, author of Illumination—How One Woman Made Light of the Darkness, discusses her book, her journey as a writer, and self-publishing on Kindle.

DAVID WISEHART: What can you tell us about Illumination—How One Woman Made Light of the Darkness?

SOPHIA VAN BUREN: Illumination—How One Woman Made Light of the Darkness is a true story written like fiction. Although, in essence, it is about clarity and love, it starts out as a wild ride. A few readers have compared the first of the three acts to the scene in Raiders of the Lost Ark in which the faces of onlookers are completely melted off by the evil forces unleashed from the ancient chest. From page one, the reader is thrown right into a scene from Sophia's life in a chapter called "Intruder Alert." The early foreshadowing leads to a dark revelation shortly thereafter. Without giving too much away, I'd just like to point out the fact that we are bombarded every day in the mainstream media with "news" about infidelity and hypocrisy in regards to celebrities, athletes, politicians, and religious leaders. But how many people living what I would call "normal lives" can actually identify with the rich and famous? The average suburban family that suffers from similar issues or circumstances typically don't have the kind of money necessary to pay for the lawyers, nannies, and extra apartment after the fallout. In Illumination, I wanted to share, with brutal honesty, one family's collapse from an safe, predicatable, cul-de-sac lifestyle by exposing the unthinkable deeds perpetrated by the dark heart of a Promise Keeper husband. In the second act, I peel back the layers of Sophia's emotional recovery and spiritual rehabilitation before the third act, in which Sophia finds love in the unlikeliest of places.

SOPHIA VAN BUREN: I think women who have a family might get the most out of it, but I also think the potential audience is much wider than that. Issues of religion and spirituality play a central role in the book, and I believe that men who strive to be old fashioned leaders of their household should read it. At the end of the day, though, it's a classic story of one person's collapse, recovery, and renaissance with plenty of drama, humor, and romance.

SOPHIA VAN BUREN: As a child, I kept journals. In fact, I still have a suitcase full of tattered, spiral-bound journals that have followed me throughout my life. I spied on my parents, other kids, and our neighbors and documented my observations, like Harriet in Harriet the Spy. As an English major in college, I wrote short stories and dabbled in fiction, but I never found a riveting story to tell. I got married on my 21st birthday and lost site of my passion for writing. Rather than making journal entries, I found myself scribbling out grocery lists and bill ledgers. Illumination is the story of what happened to Sophia's family—my family. The capturing of the story itself unfolded one afternoon as I sat in the car, trying to escape a hailstorm. Emotions and memories that I had locked away for years came bubbling to the surface. I pulled out my notebook and put my pen on the paper, and it just started to move. It almost felt like my body was regurgitating the words. When my husband read what I'd written (which later became the chapter called "The Big Bang"), he couldn't believe it, and encouraged me to keep writing.

SOPHIA VAN BUREN: I work full time at a 9 to 5 job. I need the job to pay the bills and for health insurance for my children and me. In order to carve out the time to write, I had to schedule weekends away at first. I felt like it was impossible to write at home because all I could think about were the mundane chores, like laundry and dishes that were left undone. Having my children every other weekend made it difficult to write on the weekends as well, so I finally created a schedule to write once or twice a week in the early mornings. I pretended it was my part time job, like working at a coffee shop for a couple of hours every morning before my regular job. To get in the writing mood, my ritual was to light a candle, brew some coffee, and wrap myself in a blanket on the couch with my laptop, then start hammering away on whatever story I had rattling around in my head.

SOPHIA VAN BUREN: I have to admit that David Sedaris is one of my favorite authors. He's real, he's funny, and he's painfully honest all at once. Whenever I've read his work or listened to his voice, all I could think about is how much I relate to him. Being a heterosexual mother of three, it's no small feat for a gay, neurotic man (said with love!) to win me over quite as much as he has. Sedaris turns mediocrity and pain into funny, meaningful stories that reach into you and remind you about being human. He taught me the value of being brutally honest as a writer. I also admire Jennifer Wiener. She's talented, witty, and a prolific writer. She has the gift of weaving stories and words together in such an intricate way that it draws the reader into another world, but she still comes across as a down to earth and extremely funny woman.

SOPHIA VAN BUREN: I guess I'd have to say A Homemade Life by Molly Wizenberg. Mrs. Wizenberg is a woman after my own heart. She spins yarns about her family and describes the food that reminds her of celebrations, places, or people who are important in her life. She tugs at your heartstrings and makes your mouth water at the same time. Her book consists of her simply delightful, descriptive recipes and stories from her blog. It's part cookbook, part memoir. Wizenberg proves how closely intertwined our hearts and stomachs really are.

SOPHIA VAN BUREN: I'm an avid photographer and have been shooting weddings and portraits for years. I've been a member of Flickr for the past six years and collect photos from contacts all over the world. One evening, after my book was just about complete, I came across my Flickr friend Anna Aden's photostream. I love her work, and as I cruised through her photographs, a photo of a woman lying in a field with the sun low in the sky over the treetops behind her caught me off guard and took my breath away. It was exactly what I was looking for. I contacted Anna immediately and we worked out an agreement for me to use the photo as my book cover. Many of my friends and family have said they thought it was me. In many ways, in regards to my story, it is.

SOPHIA VAN BUREN: I don't have an agent or publisher, so my promotional efforts have really just been through social media. My facebook page for the book is www.facebook.com/illuminationthebook and Twitter is www.twitter.com/sophiavanburen.  I also have a blog called A Non Custodial Mother at www.anoncustodialmother.blogspot.com. At some point, I'll probably create an ad for Facebook. Juggling work, kids, and my kids "other parents" unfortunately does not leave as much time as I would like to market Illumination.

SOPHIA VAN BUREN: That is a loaded question! I was querying agents and I did get a few sniffs, but I decided to self-publish on Amazon for one major reason—it allowed me to use a pen name (yes, Sophia is not my real name). The reason this is so important to me is because of my children. They should not know what their father did. By using a pen name, I can protect them from the truth.

SOPHIA VAN BUREN: Illumination has only been published now for a couple months, but I hope that as this revolution evolves, a system for sorting the quality writing and books from the sea of unpolished work will emerge. And I think it will. And this leads to my advice to anyone thinking of self-publishing on Kindle—be a perfectionist. Edit your work like crazy, and find someone you really trust to help. I'm lucky that my husband is a great editor. I never could have done the work he did, as quickly as did, with my stories. And when you think you are ready to publish it, get one more set of fresh eyes, preferably from a professional, to go over the whole thing. When your book is on the e-shelf and someone picks it up to peruse it, the odds of them putting it back down if errors or poor writing jump off the page at them are pretty high. In other words, it's a short window to capture a reader's attention. Do yourself a favor and make sure you publish the best possible book that you can!

Sophia van Buren writes, "At the tender age of 19, I met a man. An older man. I moved in with him and his son and eventually dropped out of college, 10 credits shy of an English degree. We got married on my 21st birthday, and for the next 14 years I hunkered down in the suburbs with my growing family. I made pancakes on weekday mornings and drove my kids and their friends to soccer practice, clipped coupons, and attended Couple's Bible Study every week with my husband. On my 35th birthday and 14 wedding anniversary, everything about my life changed in a matter of minutes.

"Eight years later, I self-published a book that covers a three year span of my life, beginning with that fateful night. Illumination—How One Woman Made Light of the Darkness is the story of how sometimes, what you least expect to happen does, and how, when one life collapses, a new one begins.

"When I'm not writing, I'm working, shuttling my kids around, or taking photos. My husband and I live in Portland, Oregon."