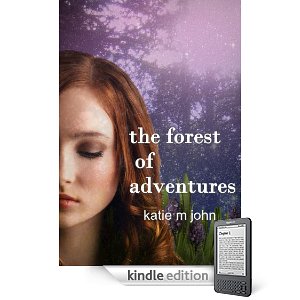 Katie M. John, author of The Forest of Adventures, discusses her book, her journey as a writer, and self-publishing on Kindle.

DAVID WISEHART: What can you tell us about The Forest of Adventures?

KATIE M. JOHN: The Forest of Adventures is a Young Adult Fiction novel of the Urban Fantasy / Dark Romance Genre. It is based on the Arthurian legends but set in the 21st Century. It is Book 1 of a Trilogy called the The Knight Trilogy and has a rich variety of characters which include Morgan Le Fay, Vivien of the Lake, and the descendents of the Arthurian Knights. The novel is very much about the thin line between reality and Fantasy.

KATIE M. JOHN: It has taken three years of research and writing to get to this point. Because I always knew it was going to be a Trilogy it has been mapped out and written as a trilogy. As a result the characters have truly evolved, grown and developed. Having lived with them night and day for three years, to me, they are very much three dimensional and "real"—this has caused my loved ones some concern at times!

Because of the nature of the book, I have had to include several classically established figures from Myth and so I have tried very hard to take a fresh, modern look at them and perhaps where they served as symbolic tropes in the original stories, I have attempted to make them more complex and psychologically rich; This is especially the case with Morgan Le Fay.

KATIE M. JOHN: I have always had in mind that it has been written for Young Adult women—for my own seventeen year old self. (However, I have been somewhat surprised by the positive reaction of the men that have read it.)

KATIE M. JOHN: When I was a teenager I wrote a lot of poetry and this is the form that has perhaps influenced me the most. (I think the discipline of poetry is quite evident in my writing.)

I have been studying other peoples’ writing since I was eighteen and then went on to teach English at Secondary School level. As with a lot of people, life got kind of pretty hectic and I had a lot of management responsibility at a young age which didn’t leave much space for much else.

With the birth of my daughter, this all changed quite dramatically. There were complications after the birth and thing got pretty close to the wire for me. It put a lot of things in perspective and made me seriously rethink what I was doing with my life. I promised myself the day after I "survived" that I needed to get off my bottom and get this novel written. I set the deadline as my 30th Birthday.

It’s a big gamble, as I have stepped back from the professional race (something that goes against the nature of someone that has always been very ambitious and competitive). Despite all of this, I just know that this is the right thing that I am doing.

KATIE M. JOHN: I am an obsessive researcher and this is where I start—notebooks of the stuff. (I’m quite particular about "nice" notebooks) Alongside the research I start to just "vomit" out the story. It’s like a purging process. I do the first edit as I go along, stopping after every three or so chapters and reworking. I make notes as I go along; essential with a trilogy in mind and I also make lists of things that I need to include. I’m a strong believer in the idea of The Golden Thread, the idea that universal truths are shown through codes and metaphors in art. Because of this there are a lot of "hidden" codes in the novel. These need to be kept a track of so the thread doesn’t tangle.

When I have completed the novel I then set it aside for six months to let it settle before it then goes through a highly critical and severe cull (sorry, I mean edit!)

My big drive at this point is to get the word count down and rid the story of any over personal indulgence.

My favourite moments are when an idea or a character just grab you and pull all your maps and plans into question. These are great moments; tangible inspiration. It’s these moments that make you look slightly eccentric in the coffee shop.

KATIE M. JOHN: I have so many authors that I love and who have inspired me. I am a massive fan of Modernist dystopia; the works of Orwell, Huxley, and Golding have been a great influence on how I view the idea of writing as a responsibility. I’m also a complete Goth at heart and love the whole Gothic era with all those torch-lit corridors, forests, and laboratories. Shelley, Stoker, Monk have all influenced my Gothic soul. The more recent YA fiction writers have also had a tremendous influence, Meyer, Kate, Fitzpatrick, Pike have all acted as touchstones. The author that has most recently blown me away is Suzanne Collins (author of The Hunger Games).

KATIE M. JOHN: This is such a hard question. I think Mary Shelley’s Frankenstein would be up there but also Orwell’s 1984. Both novels have had such a lasting and powerful message about the state of humanity. Oh maybe Golding’s Lord of The Flies too (sorry, I know I’ve just cheated).

KATIE M. JOHN: I had a very clear idea of the message that I wanted to convey and in a very "black cover" market I wanted something that was slightly different but didn’t stray too far away from my market. The cover was done in Photoshop and layers up photographs that I took whilst on vacation in France and images that I brought the licences for through a stock-photo site. It was really important to check all the licensing which is why the paperback has a different cover to the kindle e-book.

KATIE M. JOHN: I have set up a website, www.theknighttrilogy.com, and have also joined Twitter through which I have met so many interesting and brilliant people. The Goodreads site has been a fabulous community to join; they have also been so supportive and it has been a great platform for getting reader to know about my book.

I have held a virtual book launch party on Facebook, produced a video book-trailer using imovie, sent out a lot of review copies, done blog interviews and provided books for blog giveaways.

KATIE M. JOHN: I read an article in The Times about the new upload service on Kindle. It seemed to me the perfect way to get my work out to a readership and to start building a reading and reviewing community attached to my book. It was very easy (it had to be, as my I.T. skills are limited when it comes to HTML). It was also a very economically sound decision. No outlay costs. This is a massive bonus when you are independently publishing.

KATIE M. JOHN: Be careful about how easy it is. There can be a real excitement and slight over enthusiasm to put your work up there because it is so quick and easy. Beware of this and make sure that you dedicate the same amount of editing and time as you would if you were putting the book into print. You don’t want any embarrassing skeletons in the Kindle cupboard that might come out and bite you when you’re a multi-million copy selling author!!

Secondly, give serious consideration to the cover. Even though it is an ebook, your work needs to look as authentic as it would if a large publishing house were publishing it. There is a lot of prejudice about "vanity" publishing and independent authors will never win the fight if people don’t take the quality and presentation of their work with a responsibility to the small press and indie publishing cause.

Because it needed to be in HTML and this is a fairly foreign language to me I brought a program online that converts word documents to HTML. It cost about £50 and was worth every penny.

She is the author of The Knight Trilogy and has just released #1 of the trilogy called The Forest of Adventures.