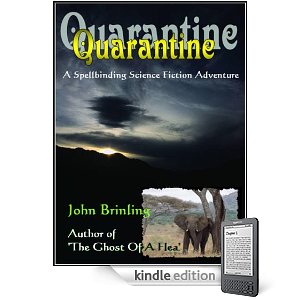 John Brinling, author of Quarantine, discusses his book, his journey as a writer, and self-publishing on Kindle.

DAVID WISEHART: What can you tell us about Quarantine?

JOHN BRINLING: This novel is a science fiction adventure with aliens and mutants and immigrants struggling for survival in East Africa, where deception, savagery and death are an inherent part of daily life, and where indigenous hatred and unimaginable horrors fuel anarchy and rebellion.

The Mbili are the ruling class. The Ine the underclass. In a land populated by these grotesque mutants, one thing is clear. They will never live together in peace. It is not peace the Mbili seek. It is total domination.

When Paul Henry, an accountant for an international accounting firm, decides to emigrate to Uhuru, he knows only that he can never return once exposed to the deadly Lassa fever, that Oneida, the love of his life, is scheduled to join him in two weeks, and that his life is pretty damn good. He is disavowed of the latter even before Uhuruan Airways Flight 100 lands in Mombasa, when he sees things out the window of the unmanned Tristar that challenge his sanity.

JOHN BRINLING: I’m detail oriented, so when I attempt to create a new world fleshing out the characters, locations, etc. flows with the building of the story, and I usually go overboard in my descriptions and have to cut back during the editing process.

JOHN BRINLING: It’s as much instinct as anything else. When the plot seems to be ebbing, I know I’ve got to jazz things up because “boring” is a fatal error. So I ask myself the question: What can possibly go wrong here? And usually get more answers than I want.

JOHN BRINLING: My characters flow from my experiences, whether they be real life, books I’ve read, movies I’ve seen, etc. My characters are usually an amalgam of everything I’ve dumped into the hopper.

JOHN BRINLING: My books are a journey. I don’t know where they are going when I start and the ride is half the fun. I always have to go back and try to square later events with the earlier plot line. Sometimes that is the most creative part of the entire writing process.

JOHN BRINLING: I have been writing all of my life. I wrote my first novel when I was sixteen. Black Dawn. It dealt with segregation and the KKK. Whatever happened to it I don’t know.

Since then, earning a living has preempted long periods of my life when I wrote very little. My wife and I are both in data processing (IT nowadays) and we usually work long hours when we are on a contract, which meant I spent little time writing fiction when gainfully employed. The birth of my daughter offered me another excuse for not writing, but that’s what it was: an excuse. Writing is hard. But it’s in my DNA and I keep returning to it, despite some part of me that prefers the lazy life. However, not writing is unthinkable, and I am constantly exploring ideas even when I’m not committing them to paper.

I lived and worked in Europe for seven years. I met my wife In Italy where we both worked for the same company, and were married in 1975. The contract we were working on ended that year and we took two years off to live in England, in a 300 year old farmhouse in Wiltshire. It was in that farmhouse that I wrote The Ghost Of A Flea, as well as Quarantine.

The Ghost has a strong autobiographical component. I was a programmer/analyst. The office ambiance in the novel is similar to life in my New York office, although the intrigues were of an entirely different nature. I had a good friend who lived in Sparta. I lived for a time near the George Washington Bridge. The building manager was an Irishman, who became a good friend, and an integral character in the book.

Quarantine is set in East Africa, where my wife and I vacationed, and I drew liberally on what we read, saw, and experienced.

I had an agent back then who marketed both books, and came very close to selling them to both Doubleday and St. Martins. Unfortunately he died before completing the sale and I put the books on a shelf and forgot about them for 35 years. Only this year did I resurrect them and publish them on Amazon’s Kindle and Smashwords.

In 1977, my wife and I returned to the states and founded our IT consulting firm, Brinling Associates. For the next fifteen years we worked hard building our business. I wrote one novel during that time, a book titled Alone, which dealt with a man in an irreversible coma who is aware of what is happening around him, but is unable to communicate with the real world. I thought the book was lost, but have just recently found a hardcopy of the book and have begun reworking it.

In 1990, during a down period in our business activities, I wrote several other novels which I am attempting to bring out of retirement. These novels were also put on the shelf when circumstances re-ignited our business opportunities. One book—The Watcher, a horror thriller—is already self-published. The other is a much larger work, a rural mystery series, that I’m still working on.

As you can see, writing books is one thing, marketing quite another. I am perhaps the world’s worst marketer, which helps explain why my writings have spent most of their lives on a shelf in my home in Vermont staring out at me asking “Why?”

For the past few years I have been writing screenplays, which are more bite-sized writing efforts. I have done fairly well in some contests, but am still waiting to be discovered. The small royalty check I earned from Amazon this quarter is the only money I’ve ever earned from my fiction writing.

My writing is pure escapism. When I sit down to write, I embark on an adventure. I let things happen and I let the characters be who they are. Since I strongly avoid outlines, I am as surprised by events as I hope the reader is. Pulling together loose ends is a subject for revision, which I do endlessly. This undoubtedly makes for more work and takes me longer to “finish” something, but it seems to be the best, the only, way for me. It is the candy bar just out of reach that keeps me at the keyboard.

My background illustrates my chaotic approach to life. I have been at different stages a pharmacist, a pharmacologist, a tech writer, a programmer/analyst, a business consultant, a business owner, a teacher, a novelist and a screenwriter. At one time I thought it perfectly acceptable, if not desirable, to change jobs/professions every year or so. I didn’t worry about the future, assuming I would always find a way to muddle through.

JOHN BRINLING: Chaotic. I can and do write at all hours. I may have multiple projects underway at one time. The last few years I’ve written a bunch of screenplays, since I thought I could do those faster than a novel. That may be true, but not by much. Seems I’m always editing a screenplay, where a novel has a more of less completed feel.

JOHN BRINLING: The Harry Potter series. To Kill A Mockingbird. Gone With The Wind.

JOHN BRINLING: All my covers have been designed and implemented by my wife. We discuss ideas, but it is her creativity that triumphs. What amazes me is the fact that we don’t have any sophisticated software to do this, and yet she still manages to produce something that is really quite clever (in my opinion!).

JOHN BRINLING: Badly. Very badly. I have sent out many requests for reviews, interviews, etc. and had very few takers. Mostly I get back a rejection claiming that they are overwhelmed with requests and have a huge backlog of books to read. I believe this to be true, so my marketing has been an uphill climb.

JOHN BRINLING: I got tired fighting the system, and Kindle seemed the easiest way to get my material before the public. As you will see in the attached bio, I had an agent many years ago who came very close to selling my stuff, but then up and dies on me. Since then I haven’t had much luck finding another agent.

JOHN BRINLING: Nothing original. It’s a tough go. You need some luck and some material that has a ready audience. Urban Fantasy and Paranormal Romance seem to be hot genres right now. My stuff doesn’t fall into those categories, so I have to build a readership the old fashioned way: I’ve got to EARN it! 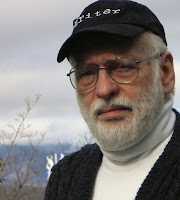 John Brinling writes, "I was born in Pittsburgh, Pa. on June 8, 1936. I grew up in Pittsburgh and didn’t leave home until I was 21 and heading off to graduate school at the University of Illinois in Chicago. I’ve attended multiple universities: Duquesne, U. of Illinois, U. of Pittsburgh, Columbia. And I have a B.S. in Pharmacy and an M.S. in Pharmacology. I was married in 1975 and have one daughter."