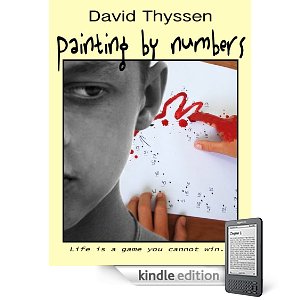 David Thyssen, author of Painting by Numbers, discusses his book, his journey as a writer, and self-publishing on Kindle.

DAVID WISEHART: What can you tell us about Painting by Numbers?

DAVID THYSSEN: Painting by Numbers has been a long journey. I actually started writing this when I was a young teenager myself, but I was never able to get very far with it at the time. I guess I needed a little more life experience and distance, but many of the thoughts of Seth, the protagonist, were my own when I was that age. I was bullied for many years for reasons I still don't fully understand, and came very close to self-destruction. I was very angry, and it reflected in my writing. Stories and poems I wrote during this years were the foundation for Painting by Numbers. But I'm still a born optimist, and somehow that part of my came though at the right time. Not for Seth in the story. He is too dark and too destructive. He tries, but in the end he concludes that "life is a game you cannot win," that his life was like a numbered painting, and all he did was connecting the dots. But the book is not all dark and gloomy, Seth also describes happier moments and has plenty of humor. I took the parts I had written as a teenager and started with that. I did a lot of research to create a realistic setting because today's kids have access to so much technology that my generation didn't have. But I realize that, even with all this technology, teenagers haven't changed as much over the years. There's just a whole lot more out in the open. If I were a teen today, I would publish all my little writings on the internet, like Seth does in the book. Painting by Numbers is his story, told through a number of blog entries. The story begins and ends when he sits in the teacher's room of his high school, besieged by police, after having shot and killed an undisclosed number of his fellow students and teachers. The story isn't about the actual shooting, but about what drove him to that point. Through blog entries, a few I.M. logs and even a few poems, the reader gets a good idea of the thinking pattern of this troubled teen, as he describes his world and the events leading up to that day.

DAVID THYSSEN: Painting by Numbers was a personal journey, so the character was quite easy to develop, even though Seth is much darker and self destructive than I was. But with everything I write, I put myself in the shoes of the character I describe. I BECOME that character so I can easily read his or her mind and write it down.

DAVID THYSSEN: I hope people will read the book and think about it whenever they see a kid in trouble. I hope they'll reach out, and not ignore the kid, like everyone around Seth does.

DAVID THYSSEN: I've been writing all my life, but I really started to write when I was a teenager. Unfortunately most of what I wrote in those years has been lost because I moved a lot. About ten years ago I took the time to start writing more seriously. I believe writing is something you're born with, but it's still a skill that needs to be trained. I have become a much more effective writer over the years. I'm currently writing a political thriller called Ballot Kill, and I'm writing much faster than before, and even when I read back I don't have to make as many corrections as I did ten years ago.

DAVID THYSSEN: Simple: I sit down and write. Sometimes I need to do research, but I usually do that on the fly. I never experience something like writer's block. Sometimes I find myself slowing down. I just write something else when that happens, and pick up where I left a little later. Writing is pretty easy to me, I can even write when I got the kids running all over the house or are watching TV right next to me.

DAVID THYSSEN: My favorite book of all time is still The Bone People, by Keri Hulme. It's such an awesome piece of work. I want to write something like that, a book that people can read over and over again without ever getting tired with it.

DAVID THYSSEN: I would say The Bone People again, but I really liked the way Extremely Loud and Incredibly Close was written.

DAVID THYSSEN: Photoshop. I had something else in mind but I couldn't find the right model for it. The problem with creating a cover with a picture of the protagonist is that you mess with the imagination of the reader. It's like watching a movie and reading the book afterwards, you get stuck with the image of the characters. I still have a face on my cover, but it's barely recognizable. I just wanted that expression.

DAVID THYSSEN: That's the hardest part. Writing is easy, the promotion and marketing is hard. The problem is that it takes so much time. Time in which I could be writing new stories. I researched tons of blogs that I thought could be helpful promoting my work and sent out dozens of emails to get book reviews. I also started a twitter and a blog. But it all takes a lot of time.

DAVID THYSSEN: Amazon is the biggest book seller in the world. Kindle is a natural choice of platform.

DAVID THYSSEN: Make sure you format everything correctly and that there are no typo's, spelling and grammar issues. It really looks amateurish when you see check out a book and it has a lot of errors. Also, never give up! 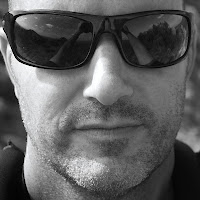 David Thyssen writes, "I was born in the Netherlands forty four years ago. Just before the turn of the century, and at the height of a successful career as a television cameraman, I decided to move my family to the Caribbean to pursue my dreams of living a life like Sandy in Flipper. After living on two different islands and a short stay in Florida, I now reside on St. Barths where I parent, surf and write (often while under attack by blood thirsty mosquitos rather than being cheered on by the laughter of jolly dolphins). In addition to three novels, I have written several screenplays."