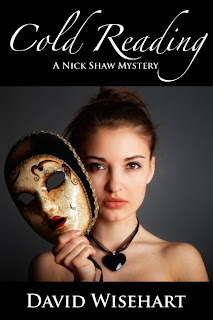 Private detective Nick Shaw is hired by a Hollywood theater producer to find a missing actress.

The gray, three-storey apartment building slouched on the corner of RENT NOW and MOVE-IN SPECIAL. Some of the windows were cracked. All were dirty. A rusty drainpipe scaled the front wall. So did a lizard. Fading red letters in a swooping font spelled: GARD N APART ENTS.

The afternoon was getting toasty, so I parked in the building's shadow. Heat buffeted me as I stepped out of my Rambler. Brown grass crunched underfoot. I tramped a path to the front steps and gave the lobby door a pull. It was locked. I pressed the call button. It was broken. Looking up, I saw a nest of wasps beneath the awning. They made me feel like I wasn't welcome.

Walking around back I caught the odor of cut onions and stale pizza wafting from a garbage bin. Above me, the building blistered in the sun, flaking off gray flesh like a leper. I brushed a few flakes from my shoulders and took my chances on the wooden stairs, which ran up the outer walls, front and back, and seemed to be holding the whole thing together. When I stepped on them, the stairs groaned. I resented the implication. The stairs nagged at me for two full flights. I took a level walkway to the last door, number 309, and gave it a good beating.

The door opened wide, replaced by a set of ruby-painted toenails, pale bare feet, olive-colored shorts, green-apple blouse, and cleavage. From somewhere above all that came a voice, "Looking for someone?"

She brushed from her face a strand of black hair. Her face was friendly, with a light summer tan. She had a nose so perky it must have come with a price tag. Thin wrinkles supported her big, heavy eyes. Her irises were purple. They watched me watching her, and didn't seem to mind. I didn't mind that they didn't mind.

"You Caroline Myers?" I said.

"That's why I'm looking for her. She's been reported missing."

"Bernard Sands," I said. "Theater producer. You know him?"

"No, but I played one on TV. Actually, that's a lie. My scene was cut. I'm a private detective."

I showed her my state license, and gave her my card.

She crossed her arms and stared at me curiously. "You look familiar," she said.

"I'm more of a movie buff. Stella was the theater girl." She cocked her head and teased me with a smile. Not the full thing, just a little taste. "I meant familiar like maybe we went out sometime. Drinks or something. Ever do any online dating?"

"All I've got are questions," I said.

"You carry a gun, Detective?"

"Not usually. I have a license to carry, and a gun under lock and key, but I only bring it out on special occasions. This is just a routine inquiry, Miss Myers. Stella's your roommate, is that correct?"

"Neither do I. Mostly, I just ask questions. Guns get messy. It's not the way I like to work."

She looked me over. Didn't complain. "Would you like to work indoors?"

"It's my specialty," I said, and followed her in.

She closed the door behind me. "I'm running the air," she said. It was cooler inside.

Her small apartment was dimly lit, with curtains drawn and half a dozen candles burning. The East Indian music buzzing from the speakers was a droning tambura. The room looked like an ashram and smelled like a spice market, thick and rich and dream-inducing. I felt light-headed. Between the incense, the scented wax, and whatever South Asian dish she had for lunch, it was all a bit too much. I caught the aroma of sandalwood and saffron, but fumbled the rest.

A bookcase stood to the right of the door. A quick glance told me someone in the apartment read Tolstoy and Gandhi and Malcolm X. Or at least thought about it. The spines weren't cracked. On the fourth shelf up, a filament of smoke curled from a stick of incense. Ashes gathered in a long wooden tray. The tray was decorated with Devanagari—Sanskrit words I'd seen before but couldn't decipher. On the same shelf sat a little black Buddha, smiling at me. I couldn't imagine why. The next level up contained an assortment of Indian gods: Krishna, Shiva, Ganesh, Lakshmi, and a few others whose names I'd forgotten.

In college I did a tour of world religions, hanging out at local temples, meditation centers, and mountain retreats. Los Angeles is a free marketplace of ancient philosophies and trendy cults. I'd dipped my brain in a few of them, looking for clues, as if my parents had committed some crime by reading me a good book I didn't trust. In a way, by slumming with foreign gurus and sleeping with fellow groupies, I was doing the same job then as I did now, searching for a missing person. But that case had gone cold. I didn't care to reopen it. At the end of my grand tour, I came back to the beliefs that had sustained me in my youth: guilt and confession.

"I'm leaving in ten minutes," she said. "My shift starts at four."

The walls of the living room were covered in framed photographs, stark landscapes, black-and-white scenes of a vast California desert. I recognized Zabriskie Point, Mosaic Canyon, and the Badwater flats.

"Did Stella take these?"

The girl hesitated. "That's before I knew her. She doesn't take pictures anymore."

Caroline went to the kitchen. "You want something to drink?"

She handed me a bottled water and kept for herself a half-empty glass of dark beer. Some kind of microbrew. The plastic bottle in my hand was cold and wet. I twisted off the cap and drank hard. A chill ran down my throat like a flash flood through a dry riverbed. Caroline took a sip of her own drink, but kept looking at me over the brim of her glass. Apparently my face goes well with beer.

She said, "You can sit down if you want."

There were no chairs. Caroline sat cross-legged on the floor by a coffee table that needed a sofa. A paisley bean bag slumped in a far corner. I ignored it and leaned against the door. Exits make me feel cozy.

Sandstone coasters were stacked on the coffee table. Caroline used one for her glass. I thought of asking for a coaster, but changed my mind. Instead, I put the cap back on the bottle, and the bottle on a shelf. It sweated into the wood. Caroline stared at it, but didn't protest. I could tell it made her nervous. Which is what I wanted.

"Ever since she landed in L.A."

"Was it a hard landing?"

"No harder than most. She had money for first and last. Found a temp agency that sent her around, mostly to the studios. Fox, Universal. Admin stuff, not acting."

"What about the acting?"

Caroline took another sip of her beer. She set the glass back on the coaster. "At first she had a hard time getting roles because she was flat."

"No chest. She made it work, though. She looked young, so that helped. Had a long run as Peter Pan, down at some children's theater off Venice Beach. But she had trouble getting women's parts."

"So she bought them from a plastic surgeon."

"You know what I mean. Stella was unlucky."

Caroline lowered her voice. "Haven't you ever been bad, Detective?"

"You sure we haven't dated?" Caroline finished her beer and got to her feet. She plucked the water bottle from the shelf. "I need to get ready for work."

I hadn't learned much, and I wanted to keep her talking. "I asked you before, and I didn't catch the answer. Do you know Bernard Sands?"

Caroline shrugged. The question seemed to bore her. "Stella talks about him. She stays over at his place most nights. Somewhere in the hills. But I never met him."

"He sends you checks, is that right?"

Caroline nodded. "I didn't want to mention it, because money's personal. But yeah, he sends me checks, so I don't worry about the rent."

"When's the last time you saw your roommate?"

"Maybe a couple of weeks ago. I'm not really sure."

"She practically moved out. I was thinking of renting the room, but she's still got some stuff here."

"You a Peeping Tom?"

She was wasting time.

"Miss Myers, I need your help. Stella might be hurt or in trouble. I'm looking for clues. There might be some of those in her things. I won't know until I see them."

"You got a warrant, Detective?"

"Your roommate back, assuming that's what you want."

She took her empty glass and the plastic water bottle into the kitchen.

"Stella wouldn't like some stranger going through her things."

I kept talking from the door. "She would if it could save her from trouble."

"What kind of trouble do you think she's in?" She didn't sound that concerned. Just curious.

I didn't answer, but let her imagine the worst. Water ran in the kitchen. Glasses clinked. She was loading the dishwasher. Caroline came back into the living room, drying her hands on a kitchen towel.

"Tell you what, Detective. I'll look through her things for you. If I find any clues, I'll let you know."

"I'd rather you not touch her things."

She used the towel to wipe the water from the bookshelf. "Oh, right. You're the professional, and I'm the clumsy amateur."

"Don't get me wrong. I appreciate your help."

She tossed the towel on the kitchen counter. "Time's up." She walked right to me and stepped in close. Her skin smelled like lavender. She nudged me aside and opened the door. "I do hope you find her."

That was my cue. "Thank you for your time, Miss Myers."

She looked me in the eye and offered me her hand. I shook it. Her hand was cold, but soft and inviting. She gave mine a light squeeze. I knew I'd be thinking about that touch for days.

I said, "I may have some more questions for you later. Maybe we can do this again sometime."

She smiled, this time all the way. "You asking me out, Detective?"

"Just asking," I said, and stepped into the heat.

Join us each week for #SampleSunday.
Posted by kucinx at 3:01 PM