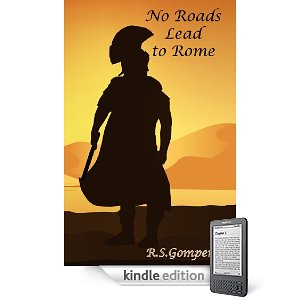 R.S. Gompertz, author of No Roads Lead to Rome, discusses his book, his historical research, and self-publishing on Kindle.

DAVID WISEHART: What can you tell us about No Roads Lead to Rome?

R.S. GOMPERTZ: My novel, No Roads Lead to Rome, and coming sequels attempt to do for ancient times what The Hitchhiker's Guide to the Galaxy did for sci-fi. (I know this is a tall order, but why aim low?) Just as the future provides a great vantage point for us to examine the present, the distant past offered me a steamy window into modern times.

Two millennia later, why do we find the Romans so fascinating? Looking back, they are the culture that most resembles our own. An ancient Roman would be at home here. He’d enjoy a high school football game, a tour of the state capitol, and a ride in a convertible sports car (as long as you called it a chariot).

The Romans were like the “Borg” from Star Trek—crushing resistance, assimilating everything in their path. They were great engineers and architects, deadly warriors, and brutally efficient administrators who built and managed the biggest empire the western world had ever seen. Romans considered themselves the only hope for humanity in the face of terror and barbarism.

From the early Republic to the late Empire, their world lasted a lot longer than much of ours has been around. That’s worth a careful look.

In No Roads Lead to Rome, I try to capture the hubris and the histories, tell a good story, and do so with a bit of humor.

DAVID WISEHART: What kind of research did you do for your book?

R.S. GOMPERTZ: I lived near Barcelona, Spain for five years. The broad brushstrokes of No Roads came to me while hiking with a friend in the hills outside of Barcelona. We were discussing—no—complaining about the decline and fall of damn near everything when it struck me that our conversation was older than the dirt we trod on.

I imagined two frustrated Roman legionaries having the same conversation 2000 years earlier while trudging along the same trail. I could almost hear an old centurion shouting, “The Emperor just doesn’t get it! Slaves too expensive? What are those vexed Roman numeral crunchers thinking?”

The vision that hit me in a flash took another five years to extract and refine. Whenever I could, I wandered Europe and North Africa to tap the residual vibrations of the Roman Empire. I did a lot of research to bring the sights, smells, and sensations of ancient times to life.

When I learned that around 123 AD a slave had botched an attempt to kill the Emperor Hadrian in Tarraco—Tarragona, Spain—the first line in the novel wrote itself:

“When it comes to assassination, execution is everything.”

R.S. GOMPERTZ: My characters tend to exist in opposition to each other. Once I’ve set the basic conflicts in motion, they take on a life inside my head and develop themselves.

At some point in the process, I try to look at their physical, social, psychological, and spiritual attributes. Are they extroverts or introverts? Are they idealistic or opportunistic? Did they grow up sucking on silver spoons, or have they struggled to get where they are?

In No Roads, I pair a grizzled, but idealistic old centurion with a chatty young rebel who joined the legion to escape from the police. These two are opposed by an incompetent, party boy politician who is paired with a bamboozling advisor bent on fleecing him. All are pitted against each other, the gods, and the Emperor.

R.S. GOMPERTZ: The Kindle edition is often in the Top 10 lists for political humor, ancient history, and business ethics. From this, I figure that people who like historical fiction, fans of the Dilbert comic strip, and folks who can laugh at the inanity of governments and large organizations are getting a kick out of this book.

The few stats I’ve been able to gather suggest that my audience is equal parts men and women, which is gratifying because this mirrors the population of our planet almost exactly.

R.S. GOMPERTZ: The journey started early. My father is a writer. I grew up to the sound of the keys of his “Royal” typewriter slapping against onion skin paper.

I posted a (hopefully) humorous piece called “The Writer’s (Heroic) Journey” on my blog. Can I defer to this and pretend it answers your question?

R.S. GOMPERTZ: No Roads was written in Spain where I was a morning person in a late night culture. I wrote each chapter as if it were a stand alone, self-contained piece. I had a rough idea where the story was supposed to go, but the characters staged a coup and took it all over the place. Eventually, I regained control of this mutinous bunch, but it was a wild ride.

When I returned to the USA, I joined a local critique group and they really helped me get some perspective, fix problems I couldn’t see because I was too close to the text.

I pitched the story to a few agents and one picked it up. He said he was looking for the next Kurt Vonnegut and I wasn’t it. After reading the novel, he had a few suggestions, which I incorporated. He also asked me to tweak the last “act” because he felt it dragged.

We submitted to multiple publishers, all of whom had good feedback, some of which required a graduate degree to understand. This triggered yet another rewrite and pass through the critique group.

Then my agent left to work on the digital side of publishing. My new agent suggested I rewrite the book from a teenage girl’s point of view and I became an indie author.

R.S. GOMPERTZ: I love humor and satire. When I’ve got nothing else to tweet about, I just quote one liners and quips from fools and sages. That said, I’d be honored to share the shelf with Douglass Adams, Kurt Vonnegut, Jr., Terry Pratchett, and John Kennedy O’Toole. Unfortunately, this will never happen as none of their last names are close to mine.

R.S. GOMPERTZ: Cat’s Cradle by Kurt Vonnegut, Jr. This thin book with chapters that average about one page in length is the most complete and insightful picture of the modern world that I’ve ever found. It’s a mother lode of insight, satire, and distilled genius. If you read one book by Vonnegut, I recommend this one.

R.S. GOMPERTZ: I modified a piece of stock art that was close to what I wanted. The centurion in my story comes from North Africa and the cover depicts his silhouette against a sunrise over the desert. Or maybe it’s the sunset. I’m not sure.

R.S. GOMPERTZ: Before launch, I read up on how to market through Amazon because I knew that would be my primary online channel. I also made sure my web site was functional enough to give people a sense of the book and where to find it. (www.noroadsleadtorome.com)

Next, I set up live events in my local area. I did readings, gave talks on indie publishing, and participated in (and organized) book and author fairs. Because I live in a small town, it hasn’t been hard to get local press interest.

Gradually, I got the social media stuff figured out: twitter (@NoRoadsToRome), Facebook (http://www.facebook.com/pages/No-Roads-Lead-to-Rome/185208921800), and my recent blog (http://noroadsleadtorome.blogspot.com/)

My area, Portland, OR is blessed with the Willamette Writers group which is a very active and extensive organization. I was lucky enough to be offered a youtube spot on their channel, and silly enough to say yes. (Here’s what happens when someone shoves a camera in your face with two minutes notice: http://www.youtube.com/watch?v=CM5Hf-xh2m8)

R.S. GOMPERTZ: No Roads is available on all platforms, but the bulk of my ebook sales has been through Kindle. Amazon has done a great job with the device and the proliferation of apps that enable you to read Kindle editions on anything from smart phones to stone tablets. If I had to recommend one ebook format, Kindle would win by a landslide.

Treat this project no differently than you would a traditional publication. Make sure it’s been critiqued and well-edited. Have some reviewers lined up to help with visibility on the Amazon site. Get your website working and have a general marketing plan and be adaptable. If you’re not comfortable with “social media” get a kid to help you.

The standard advice of “build a platform” first, is very good. Of all the social media, I’ve found Twitter and Facebook to be the best ways to get the word out to the most people. Anything you can do in advance to prepare the way will help.

That said, don’t drive your friends and family crazy. The key to success is getting people who don’t know you interested.

R.S. Gompertz was born high above Sunset Blvd not too far from the very first International House of Pancakes. He grew up in a suburb of Disneyland and remembers the day that militant hippies took over Tom Sawyer's Island.

Gompertz has lived and worked in the U.S., France, and Spain. He wishes the world would settle down and be reasonable even though this would make his books less relevant.

He got the idea for No Roads Lead to Rome while hiking in the hills above Barcelona, Spain. The story came to him in a blinding flash that took the next five years to extract.

While working on No Roads, he published a series of articles about travel and expat life, the first volume of which is now available as The Expat's Pajamas: Barcelona on Kindle.