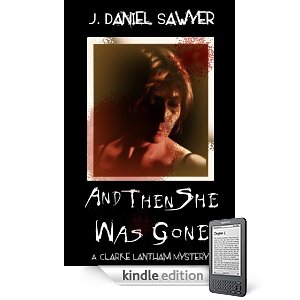 J. Daniel Sawyer, author of And Then She Was Gone, discusses his book, his journey as a writer, and self-publishing on Kindle.

DAVID WISEHART: What can you tell us about And Then She Was Gone?

J. DANIEL SAWYER: And Then She Was Gone is the first of the Clarke Lantham Mysteries (two have been released so far, ten are currently planned), a series set deep in the culture and rhythms of the San Francisco Bay Area. It follows the adventures (and frequent misadventures) of former-cop-turned P.I. Clarke Lantham, a fairly surly character who, because he thinks he's seen everything, tends to wind up in situations so outlandish he has trouble believing he hasn't slipped into the Twilight Zone.

Thankfully, he has a coping mechanism for dealing with reality when it starts misbehaving: sarcasm.

In this first book, he makes the mistake of taking up the case of a missing college student even though he knows he'll have to go to the suburbs (in Lantham's personal Thesaurus, "suburb" is listed as a synonym for "hell"), and winds up on a chase that pulls him into the biopunk, hacker, and kink underground for a hell of a roller coaster ride.

The San Francsico Bay Area has a very unusual mix of traditional and cutting-edge cultures. It's the seat of both the computer and the biotech revolutions, and of the neo-primitivist and neo-pagan movements—similar paired opposites litter the landscape like fallen leaves—which makes it the ideal place to set a series that explores cutting-edge scientific, technological, and cultural issues as a side dish to near-impossible mental puzzles and a giant main course of snarky humor. Perhaps the most important similarity between Lantham and the City he calls home, though, is that both are very calculating, ruthless places that nonetheless have a lot more heart than they like to admit.

J. DANIEL SAWYER: The way we speak tends to betray the stamp of our lowly origin, if you'll forgive me cribbing the quote. So I work a lot with the written equivalent of accents—the rhythms people speak with, the words they choose—in order to convey character in a quick-and-dirty way. In a hard-boiled mystery, you sometimes only get a few minutes with a character, but I want that character to be memorable without feeling like a gimmick.

That's not to say that I don't flagrantly steal from people in real life. Show me an author who doesn't eventually write all their friends, family, and childhood nemeses into a story and I'll show you one that hasn't been writing for very long. People—even the ones we think are boring because we're familiar with them—are an endless buffet of quirks flavor, a fact which I shamelessly use to put a bit of punch into my prose.

J. DANIEL SAWYER: Someone who secretly has a slightly jaundiced view of the world, and doesn't mind having fun with it, will feel right at home in the world of Clarke Lantham. When your narrator describes police work as "...a game that's got more rules than a D&D set designed by Rain Main," you can figure the level of snarky fun is going to be somewhere between Lewis Carroll and Monty Python.

Other people who'll find the book fits them like a comfy sweater: fans of House MD (or Douglas Adams or Penn & Teller), people who go in for the kind of desert-dry sarcasm you'd find in old Humphrey Bogart films, and anyone who loves feeling a strong sense of place and exploring the scary edges of contemporary culture.

It's definitely a book for adults, both because of its techno-thriller trimmings and because of its seedy content (parents of Jr. High kids will find plenty to object to in terms of attitude and language).

J. DANIEL SAWYER: I started writing stories in markers on posterboard when I was five, but at that stage there was still hope for me. By the time I read Lord of the Rings at age eight it was all over. I was bound and determined to spend my life making things up.

Since then, I've occasionally had bouts of sanity where I've gone to school, gotten a job, and attempted to behave in a manner befitting a civilized human being. Unfortunately, the madness just runs too deep. Over the last twelve years I've written a number of screenplays and short stories, I've just completed my fifth novel, and I'm working on my seventh and eighth as we speak (not counting this interview).

Currently, I'm writing some stories specifically for the ebook market and shopping others to New York, and making the decision between them based on what I see as the tastes of the different markets. I'm two months into this mixed business model, and having a blast.

J. DANIEL SAWYER: I'm always on the prowl for things I find interesting. Documentaries, books, interesting people at parties, they all go into the mental churn and usually emerge as a quick sketch of notes. I keep piles of these notes—anywhere between a sentence and a couple pages—of ideas, premises, and character concepts. I treat this pile like ore: I mine it for something that will suit my purpose-of-the-moment.

And I'm always mining. If I make it through a day without scratching out a couple thousand words, I feel pretty much like I'm slacking off. That doesn't sound like a lot, but over the course of a year, 2k words/day gives you over 700,000—seven novels or more, depending on how you divvy it up.

I also write more than one thing at a time. Because I write across genres, I try always to keep several projects going with different emotional tenors. This helps me avoid several flavors of writer's block, including "I don't know what happens next" and "I'm not in the right mood/headspace to write this kind of story."

J. DANIEL SAWYER: Not an easy question to answer—do I pick authors I know because I love working with them or talking shop with them? Or do I pick an author with a career trajectory I'd like to emulate? Or do I pick the authors that, as a reader, keep me coming back?

I think I'm going to cop out and pick someone who sits at one of the intersections. Douglas Adams is a personal hero, both for the unexpected depth of thought behind his humor, and because, as a writer, he presented himself as a caricature of all of our worse impulses. He'd talk about his obsession with tea and baths as a way to avoid work. He'd say things like, "I love deadlines. I love the wooshing noise they make when they go by." As a writer, he actually did quite a lot, though much of it was nonfiction. As a character, he's the picture perfect neurotic lazy writer who we all secretly think we've always been and will never escape, and there's something about having a guy like that doing so well that makes me think, "You know, this really is a viable career path. It really is worth doing."

J. DANIEL SAWYER: Two books, actually. They both share a singluar beauty, joy, and unexpected depth that have stuck with me for decades, through multiple re-readings.

They are arguably the two finest books I've ever read.

J. DANIEL SAWYER: I've been a photographer for the last decade-and-a-bit, so I have a considerable store of pictures to draw from. This shot comes from a studio shoot with one of my favorite models, with a little color work done. I added some blood splatters and a border in GIMP, and then my graphic designer and I worked together to pick the fonts and lay the titles out in a way that lends itself to being a template for a theme, so that the rest of the series will have a similar look and feel.

J. DANIEL SAWYER: I podcast fiction fairly regularly through my website at http://www.jdsawyer.net, and I also maintain a presence on twitter and blog regularly. I'm just now stretching out to doing more pro-active marketing (such as this interview) to see whether it's worth the time. After all, I could be spending this time writing the next book.

J. DANIEL SAWYER: It's the biggest e-platform in the world. If you're going to test the ebook market, you'd be a fool to neglect the Kindle.

As for why Kindle vs. print? I don't see a dichotomy. There's a marvelous market opening up for ebooks that didn't previously exist, and selling through New York is a time-consuming process. I didn't want to miss playing around in an emerging market simply because I didn't have any novels available through traditional channels yet.

I figured I had a choice: I could pull out of New York and self-publish, I could ignore the ebook market entirely, or I could write some books for each market. I picked the third—after all, as a writer, upping one's output is a fun challenge, and there's no reason to give up on one opportunity just to seize another.

J. DANIEL SAWYER: Write a damn good book, get it properly edited, and lay it out well. And don't think of it as a short-cut. It takes most authors at least half a million words of concentrated practice before they get a sense of what they're doing and start producing stories that other people want to read. Even then, it's hit and miss until you get upwards of one or two million words. This is a long-haul business, and you have to be prepared to let your less-spectacular works sink like a stone if you decide to put them up. The market will simply ignore what it doesn't like. Be prepared for that to happen to some of your stories, particularly if you're very new at this. And, whatever you do, don't forget that whether you go to New York or you go to Amazon, this is a business. Read contracts before you sign them, and learn the ins and outs of IP law. Otherwise, you're just going to get yourself into some very expensive kinds of trouble.

J. Daniel Sawyer is a hat-wearing, obsessive-compulsive nutcase attempting to write his way out of the loony bin. He's the author of numerous fiction podcasts including: href="http://sculptgod.jdsawyer.net">Sculpting God, href="http://downfromten.jdsawyer.net">Down From Ten, and href="http://antithesis.jdsawyer.net">The Antithesis Progression (which earned him a spot as a 2009 Parsec Finalist). Lacking in personal qualities things that make for respectable character (such as the ability to sit still and shut up), he's forced to channel his lack of decorum into the fields of photography, a/v production, and writing for outfits like LinuxJournal and the occasional speculative fiction anthology.

When not working on his new secret steampunk fantasy adventure or getting into other mischief, he can be heard hosting the skeptical salon The Polyschizmatic Reprobates Hour, and as the narrator of Free Will, book two of The Antithesis Progression, both available through http://www.jdsawyer.net.