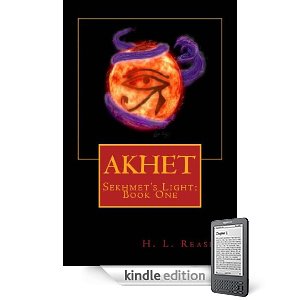 H.L. Reasby, author of Akhet, discusses her book, her journey as a writer, and self-publishing on Kindle.

DAVID WISEHART: What can you tell us about Akhet?

H.L. REASBY: Akhet is a contemporary fantasy novel which asks us to wonder "what if the Ancient gods were real," and take it a further step to imagine them taking an active interest in our modern world. The main character is Dr. Nicole Salem, an archeologist who finds herself confronted with this reality and who then has to reassess everything she thinks she knows about the world she lives in when Sekhmet, the Ancient Egyptian goddess of war, vengeance and more, selects Nicole as her avatar; a human granted a portion of the goddess’ power so that she can serve as Sekhmet’s agent in the mortal realm.

It also very much fits the profile of a super-heroic "origin" story as Nicole learns to control her new abilities and goes through many of the typical superhero conundrums such as whom she should share this secret with, the struggle of trying to maintain a semblance of a normal existence, and overcoming her own fears to embrace these changes so she can help others.

DAVID WISEHART: What research did you do for the novel?

H.L. REASBY: I’ve been in love with Ancient Egypt for as long as I can remember. I’m constantly looking for new books, documentaries, etc to devour so I can learn more about this fascinating civilization and the people who populated it. Fortunately, that means I didn’t have to spend weeks and weeks just compiling information on the background situation.

I did, however, spend some time studying action movies and youtube videos of various fighting styles to help me write my combat scenes. If I could, I’d still go back and rewrite a couple of them in the first book, but the second book feels much more dynamic in the action scenes as a result of the time I put in to learn.

H.L. REASBY: I’ve found that characters tend to develop their own voices after a while, particularly when you develop a level of intimacy with them. All of my main characters (Nicole, Marcus, Kemsefet, and Alex particularly) have very distinct voices and personalities in my mind and I think that carries onto the page very well. One important thing to bear in mind about differentiating characters is to consider how educated, well-spoken, and/or formal they are in their speech patterns.

Nicole, for example, is a quintessential westerner, using slang and being very informal most of the time while Meshrew is more formal in the way that she speaks and refrains from using contractions and slang. They’re small details, but very important.

H.L. REASBY: I don’t believe in having "ideal" readers. I think that the concept gives us an excuse not to try our hardest to put out the best quality writing that we can by giving ourselves permission to use clichés that only hard-core readers of our genre recognize. I my books to be books that anyone, regardless of whether they like the fantasy genre or not, can pick up and read and find something that they enjoy about it.

H.L. REASBY: I’d always been a dreamer; one of those kids who was always making up stories and adventures in her head. It never occurred to me that it might be something I would like to do for a living, however, until college. I needed an additional elective and my mother suggested I take a creative writing workshop after I’d let her read a story that I’d written involving the X-Men from the comic books. To say I was dubious would be putting it mildly, but to make her happy, I went ahead and enrolled.

The entire first semester was equal parts exhilaration and terror; I’d always been a painfully shy kid and the first time the facilitator of the workshop (the wonderful Lois Roma-Deeley) asked me to read a piece aloud was absolutely terrifying. However, Lois and the other writers were highly supportive and it wasn’t too long before I actually looked forward to sharing my weekly writing with the class and hearing what they thought of it.

Of course, even then the idea of being a writer as a career was only a nebulous idea in the back of my mind and didn’t really become a potential reality until a few years ago. I’d been periodically working on a novel and not making a whole lot of headway. Finally, my wonderful husband, Garth, decided to play taskmaster. He would ask me every day if I’d written that day and expect a good reason if the answer was ‘no’.

Having him hold me accountable helped me develop writing into a habit that made it so much easier to complete the first book of Akhet and finally achieve my desire of being a published author.

H.L. REASBY: This has actually evolved quite a bit from when I started work on Akhet. With the first book, I knew the main character very well and had an idea of where I wanted to go with the story, but that was it. I kind of floundered my way through writing the rest of it which made the revision process particularly grueling.

With the second book, Peret, I’ve gotten smarter. I put together basic timeline of what I wanted to have happen, and then created a spreadsheet where I plugged events into the book based on the chapter I expected it to come in. Having that spreadsheet made it so much easier to see when I needed to insert some action, etc. It was an invaluable tool, one that made the writing Peret much less painful and one I plan to use from now on.

H.L. REASBY: I have a handful of people that I consider to be "literary role models" and chief among them is Michael Stackpole. I cannot state firmly enough how much I love reading Michael’s writing. It’s clean, it flows beautifully, and he weaves the most fascinating worlds I’ve ever encountered. He’s one of the few writers that the moment I see that he has a new book out, I will immediately put aside whatever else I’m reading in favor of him because I know that I’ll get a great story from him.

Also in my personal pantheon, I have Stephen King (his characters are still some of the best written I’ve yet read, behaving like real people rather than characters on a page) and some of the classics as well; Ursula K LeGuin, Tolkien, and C.S. Lewis among others.

H.L. REASBY: Wow, one book, huh? This one is very tough because I have so many books that I love dearly. I think I’d have to say A Wrinkle in Time by Madeleine L’Engle, though. It’s one of the first novels I really remember striking a chord with me and making me really want to learn more about this world that these kids were in and their adventures.

H.L. REASBY: For the paperback edition, my husband did the drawing that’s the center piece of the cover, depicting the evil god Apep in his serpent form coiling around Ra the sun god in his never-ending attempts to destroy Ra.

I wanted something different for the Kindle edition, however, so I took the image I was using for Sekhmet’s device and colored it in using a paint program. It’s simple, but I really like the way it turned out.

H.L. REASBY: I have a website (www.theliteraryfatale.com) as well as a Facebook Fan page and I’m an avid user of Twitter at this point. I can also be found on Goodreads where I gave away several copies of Akhet, and I have been a featured author on the Night Owl Reviews website. Finally, I have recently done an interview with Lexi Flint for her blog, and I’m also in the process of lining up ‘appearances’ on a couple of different podcasts.

H.L. REASBY: When I first completed my book, I had no intention of self-publishing. Having worked in the publishing industry (on the retail end), I had a bit of the snobbish attitude that conventional publishing tends to have. It wasn’t until my friend Ren Cummins published his book through CreateSpace and for the Kindle that I started even considering it.

Then, I went and started reading on Michael Stackpole’s blog (Stormwolf.com) about the realities of publishing with a traditional house. That was a revelation to me. Michael had been in the industry for over 20 years, had appeared on the Times Best Seller list, and who had trodden some of the most hallowed intellectual property around (Star Wars), but after he finished the last book of the Secret Atlas trilogy, he was unceremoniously dropped by his publisher. He’s been self-publishing ever since and has been a fantastic advocate for others to do the same. Anyone who is interested in a peek behind the curtain at the true face of the publishing industry would be doing themselves a great favor by reading his blog.

The fact is that by self-publishing, I retain control of my creations and how they’re marketed. I also get the lion’s share of the profits to be made from my books, which is how it should be.

H.L. REASBY: My primary piece of advice for anyone interested in self-publishing is to find at least one really good proofreader, preferably two or three, who you can trust to be absolutely honest and listen to what they have to say. By no means are you required to change your book according to their recommendations, but you should at least consider them and have reasons as to why you’re changing things or not.

If not for Garth and Ren, Akhet would not be as strong a novel as it is. Their feedback really made me think about the paths my story was going down and kept me honest about the actions of my characters.

H.L. Reasby (Heather Lynn) is a 30-something writer who resides in the beautiful (and rainy) Pacific Northwest. She lives there with her beloved husband, Garth, two deranged cats, and two crazed dogs.

Her first novel, Akhet is available for purchase through all major retailers, and she is currently working on the second installment of the Sekhmet’s Light Trilogy, Peret.

Reading and writing (of course) top the list of personal interests, but she also enjoys movies, gaming (roleplaying games being her favorite), and spending time with friends