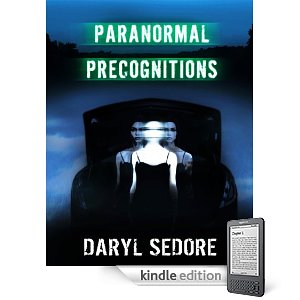 Daryl Sedore, author of Paranormal Precognitions, discusses his book, his journey as a writer, and self-publishing on Kindle.

DAVID WISEHART: What can you tell us about Paranormal Precognitions?

DARYL SEDORE: Paranormal Precognitions is a rich tale about a confused girl, Sarah Roberts, who is suffering from trichotillomania as well as attacks of Automatic Writing. Someone from the Other Side channels through her to write out crimes and accidents that are about to happen. Sarah begins to interpret these messages and acts on them, saving a few people. Then one goes wrong. By trying to avert a potential kidnapping, she gets taken instead. During the process, one of the kidnappers is killed.

Now the police are looking for her because they have her notebook which contains intimate details of crimes and accidents, plus witnesses have placed her at the scene of the murder.

On a race to save herself, the biggest surprise is yet to come.

Who is talking to her from the Other Side and why?

DARYL SEDORE: One way is by constantly asking, “How can I make this worse?” I challenge my characters on an emotional level, taking them to an extreme place and then holding them there against their will. They fight, they lash out, and finally conflict resolution takes place, yet tension remains throughout.

DARYL SEDORE: At first I create a character sketch. I evaluate what each character wants and move forward with that motivation in mind, especially during dialogue. That’s what allows for great discourse when two opposing desires come into conflict.

In addition, during the revision process, I do an edit to fine tune the character arc. I go through the manuscript on a scene by scene of each character to make sure they have remained true to their vision, true to who they are. This also allows me to see their weaknesses and strengths and where I have made it worse for them and how they handled it, and whether or not it was still in character for them.

DARYL SEDORE: My ideal readers are people who enjoy a fast-paced thriller. One where details are limited and the story is king. I believe in relaying the story as a story happens, in real time, with real people dealing with adversity. Not relaying a grocery list of detailed items for the reader to check off so they know exactly what a character is wearing or eating.

DARYL SEDORE: I wrote my first short story when I was a ten-year-old. Through the years I wrote off and on until the mid-1990s. By 2001, I began writing seriously, producing my first full-length novel by the summer of 2002. In late 2004 I was contracted out by a Northern Ontario magazine for a monthly short story, which I wrote forty stories for in just over a three year deal. A few of those stories went on to win awards and are now published as short story collections on the Kindle. I queried literary agents for years and only received requests for partials and fulls without advancing to the next stage.

Finally, in September 2010, I uploaded Paranormal Precognitions onto the Kindle and the rest is history. I’ve since uploaded my entire back catalogue (11 titles) with four more coming onto the Kindle in 2011.

DARYL SEDORE: It starts with the idea, no matter how small. Once the idea is formed, I sit down and start writing. I decide where I want the story to start and begin typing there. It develops on its own from that point. At times I might pull away from the story on the computer for a few days, grab a pen a paper and jot ideas down where I want things to go, what I want characters to do. That allows me to map out the next 10,000 words or so. Once those words are typed, new ideas and story directions have formed enabling me to hand write another batch of notes.

I write 10,000 words per week, every week when writing a novel. It takes me about two months to write a novel and two months to edit it. While editing it though, I’m writing the next novel.

DARYL SEDORE: I’m really moved by Stephen King, Clive Barker, and Charlie Huston. A few other great authors I’ve loved are Michael Crichton, Jack Ketchum, and Harlan Coben. I love the mystery of Barker, the roughness of Huston, the wits of Crichton, and the thrill of Coben. They all inspire me to add these elements and give my reader a thrill ride of mystery mixed with angst.

DARYL SEDORE: Time Traveler’s Wife would be one. The time it took to write such an intricate, examination of love over the span of a time traveler’s life was immense. How Audrey kept track of time was profound for me. I read that book and was consumed by the talent alone. I aspire to meet those lofty goals one day.

DARYL SEDORE: A graduate of graphic design out of Denmark, Daniel Johnson, has designed all my covers except one. It was an easy task as Daniel would present multiple covers for me to digest and together we’d take elements of each one and mix them to come up with a cover that works for my story. The automobile in the picture is the vehicle in which my main character is kidnapped in and the image of the girl superimposed represents her being pulled in multiple ways.

DARYL SEDORE: I’ve mainly been creating a web presence by using Twitter, Facebook, Goodreads and LibraryThing. I also blog once a week on writing issues. In addition to that I have just completed a sponsorship of Kindle Nation which will feature my novel on March 4, 2011. I’m looking forward to that as it has proven results for ebook authors in the past.

DARYL SEDORE: For me, one of the main reasons is the sheer volume that Amazon does through the Kindle for indie authors. They make it easy to upload and they’re author friendly. Kindle offers a great royalty percentage and have the best sales of any other e-reader out there.

DARYL SEDORE: Do it! Really that’s it. Just commit to it and make it happen. The industry is changing and self-publishing isn’t what it used to be. Authors are taking control now. Authors are in control. You don’t need an agent. You don’t need a publisher. Do it yourself. Just scan some of the blogs of the self-published authors and you’ll discover all the sales these authors are making. Every month my sales increase. I have not had a month lower than the previous month yet.

Just do it. A year or two from now, you’ll be happy you did.

Thanks for having me. I appreciate the invite and I wanted to send a special thank you to Mr. Wisehart. I really appreciate what you’re doing here. 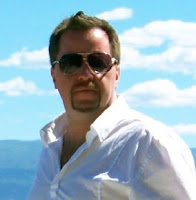 Daryl Sedore was born in southern Ontario in 1969. By the age of ten he was already writing short stories. Throughout High School various teachers encouraged him to choose writing as a career, but Daryl decided to invest in the stock market (TSE) in grade 11 and start his first company at the age of seventeen. He built numerous companies and became semi-retired at thirty years of age. During the 1990s he still wrote short stories, but it wasn't until the year 2000, that he started writing novels. Daryl has written four novels and over 50 short stories, plus a work of non-fiction called Publishing Exposed: The Sedore Report which was published in November 2010. Six of his short stories have won awards, including, "The Newspaper" which won 6th place out of thousands of entires in the 75th Annual Writer's Digest Short Story Contest.

Paranormal Precognitions has been released as an ebook. The second of the trilogy is due out in early 2011. His novel Bad Vibes will be released in the fall of 2011.