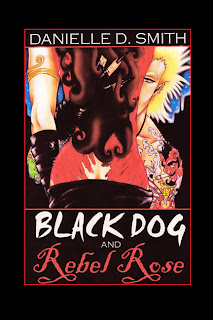 Danielle D. Smith, author of Black Dog and Rebel Rose, discusses her book, her journey as a writer, and self-publishing on Kindle.

DAVID WISEHART: What can you tell us about Black Dog and Rebel Rose?

DANIELLE D. SMITH: Black Dog and Rebel Rose is a hotter-than-hell erotic horror romp that pairs two truly unforgettable characters. The hero of the story is a fellow by the name of Skriker. The son of a True Native of Hell and a mortal lady of the night, Skriker is a hot rock star-platinum half-demon hunter who specializes in the destruction of all the evils that dwell in the dark. When not hunting, he is an insatiable seducer and wanton lover of the female sex. A gory vampyre hunt in an abandoned town leads him to stumble upon a fellow hunter: a beautiful woman with an ironic lineage by the name of Rose, who instantly makes him head-over-heels hot for her.

Rose is a Nephil, the fruit of a passionate union between an angel and a mortal girl (readers can discover her parent's story in my debut novel, the dark fantasy love story Psyche's Gate). She has battle ferocity honed into her very bones via the bloodline of her father Alexius, a top soldier of the Holy Army. A gorgeous raven-haired huntress who prefers to live, and hunt, alone, her chance meeting with Skriker while slaying a nest of vampyres forces her to face emotions and desires that she once swore she would never allow herself to feel.

When these two motorcycle riding, shotgun wielding warriors collide, the result is a forbidden love story that takes would-be enemies (the predator and the prey, if you will) and twists their destinies inexorably together.

DANIELLE D. SMITH: It is my goal as an author to create characters that fascinate readers and capture their hearts, heads, and guts. Each character created for my books is crafted with a unique personality, from their physical traits to their most unique quirks. I give each fictional figure a distinct look and a personality as well developed as someone you would personally know. Whether angel, mortal, demon, or deity, certain realistic aspects are paired with the fantastic to allow the reader to identify with them and make a strong connection. Good characters stick with a reader like crazy glue and don't...let...go.

DANIELLE D. SMITH: Someone who seeks characters that they can give a shit about and a story that binds them till the last page and leaves them begging for more. I'd also like to think that my ideal reader is someone who is looking for something that's a little different from the same old vampire-and-werewolf fare that so swamps the Paranormal/Supernatural genre these days.

DANIELLE D. SMITH: I originally began writing short fiction and poetry as a young teen. I let writing fall by the wayside in my early 20s to focus on art (I am a professional artist and tattoo apprentice). When I was 28 my husband went into graduate school full time and I turned to writing once again as something to distract me from the stress of what we were facing financially and as a couple. At the age of 29, my debut novel, Psyche's Gate, was contracted for eBook/Kindle publication by Liquid Silver Books. Since then I have had another novel, Black Dog and Rebel Rose, published by the rapidly growing Solstice Publishing in both Kindle and Print, and this same publisher has just recently released a Print Edition of Psyche's Gate. Both publishers are wonderful to work with and so very supportive of their authors.

DANIELLE D. SMITH: Truthfully, it's clusterfunk. I'm a Jack-of-all-trades and find that working organically is the best. I don't write in a linear fashion. I keep two files: the main story and a file called "Snippets." I will frequently write scenes far in advance, even a book or two in advance, if the mood strikes. It will be filed away under "Snippets" and then pasted into the manuscript it belongs to when the time comes. I frequently write on little more than raw inspiration, alcohol, and caffeine.

DANIELLE D. SMITH: That's an easy one. Stephen King, naturally, especially his incredibly unique Dark Tower series. China Mieville, who wrote the evocative King Rat, a dark London grit version of an old fairy tale. Will Christopher Baer and his dark and edgy Phineas Poe series. Neil Gaiman, for...well...everything. I think Neil's style of storytelling is the closest to my own, and therefore all of his books have held some sort of influence over me.

DANIELLE D. SMITH: Two books: Stephen King's The Gunslinger and Neil Gaiman's American Gods. Still two of my all-time favorites and big influences on me as a writer.

DANIELLE D. SMITH: Every way possible. Aside from the standard Facebook/Twitter/and MySpace route, I maintain an official author website with contests, interviews, reviews, links, and book snippets. I create original art pieces depicting my most popular characters, which my readers love, and have a new website going up just for character artwork. I regularly do author and character interviews, participate in contests/giveaways, and engage in dialogue with authors and fellow readers on major sites including Amazon and Goodreads. 2011 marketing will include participation in the San Diego Public Library system's annual Author Exhibit and shopping two unique projects: a graphic novel and a screenplay version of Black Dog and Rebel Rose. There has been some interest expressed in BD&RR becoming a film, so that is a big priority.

Every marketing attempt, whether big or small, is another essential stepping stone on the way to greatness. I know that there are lots of paranormal fans out there who will find something to love in my books; it just takes some effort to reach out and perk their interest enough that they will be willing to take a chance on someone new with a different type of paranormal fiction story!

DANIELLE D. SMITH: Kindle books are generally less expensive than print editions, allowing readers to more easily "take a chance" on a new author without feeling like they are spending too much of their hard-earned money. The Kindle saves space for those without room for loads of books crowding their shelves, and allows consumers who are big on the "green" movement to "consume" a high number of great reads without sacrificing all those trees. There are so many benefits, and I am a firm believer that we will consider seeing said benefits grow and change as we move steadily into the future. I think the publishing industry in general is catching on to how great the Kindle platform is for all involved: readers looking for a broad range of choices, publishers looking to cut costs, and authors offering unique literary fare that may not fit into a "mainstream" category.

DANIELLE D. SMITH: I am not self-published myself; however, I do know many self-published authors and have listened with a sympathetic ear to their trials and successes. I have also read their work. The very best advice that I can give to any author looking to self-publish is this: make sure the product you are putting out is PROFESSIONAL. I know this sounds harsh and blunt, but I have seen way too many self-published books that are utterly plagued by bad grammar, spelling errors, misue of vocabulary, sentence/paragraph structure problems, plot holes you could drive a work truck through, and general awful design. The self-publishing industry allows some great and unique material to get out there, but it also allows people who SHOULD NOT be writing to play at being an "author" and clog the digital book world up with their garbage.

If you are self-publishing your book, be willing to spend the money to hire a good copy editor and a decent cover artist that will make your project really shine. You'll be doing yourself a favor as well as the rest of us who busted our rears getting our work traditionally published. I hate to say it, but all of those really bad self-published books drive readers away and make them less willing to take a chance on new material. Take pride in your work and make sure that it really belongs on someone's digital shelf before you put it out there. You will have much to celebrate! :)

Danielle D. Smith was born in San Diego, California, USA. In addition to being a writer of gritty urban fantasy stories she is an accomplished fine artist and illustrator whose visual work has appeared in various public, private, and gallery exhibitions and in national publications. She is currently working as an apprentice tattoo artist at Tempest Tattoo in Pacific Beach. Dani, as she is known by many who are close to her, lives with her beefcake husband and "partner in crime" and an ever-growing collection of books, documentaries, independent and foreign films. The pair spends their "couple time" enjoying food, booze, hanging out with the bar and wait staffs of various San Diego eateries, getting tattooed, and other such activities.