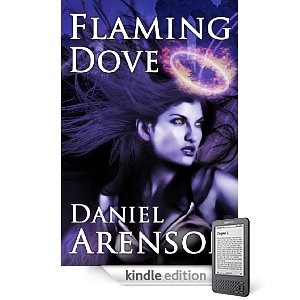 Daniel Arenson, author of Flaming Dove, discusses his new book, his journey as a writer, and self-publishing on Kindle.

[In August I interviewed Arenson about his previous novel, Firefly Island.]


DAVID WISEHART: What can you tell us about Flaming Dove?

DANIEL ARENSON: Flaming Dove is a dark fantasy novel about angels and demons.

Its tagline is: "Outcast from Hell. Banished from Heaven. Lost on Earth."

The battle of Armageddon was finally fought...and ended with no clear victor. Upon the mountain, the armies of Hell and Heaven beat each other into a bloody, uneasy standstill, leaving the Earth in ruins. Armageddon should have ended with Heaven winning, ushering in an era of peace. That's what the prophecies said. Instead, the two armies—one of angels, one of demons—hunker down in the scorched planet, lick their wounds, and gear up for a prolonged war with no end in sight.

In this chaos of warring armies and ruined landscapes, Laila doesn't want to take sides. Her mother was an angel, her father a demon; she is outcast from both camps. And yet both armies need her, for with her mixed blood, Laila can become the ultimate spy...or ultimate soldier. As the armies of Heaven and Hell pursue her, Laila's only war is within her heart—a struggle between her demonic and heavenly blood.

DAVID WISEHART: How did you do your world-building?

DANIEL ARENSON: Flaming Dove is set in a post-apocalyptic Jerusalem, twenty-seven years after the armies of Heaven and Hell destroyed the world in a war to claim it.

I spent some time in Jerusalem, and tried to imagine how it would look after Armageddon. Current day Jerusalem is a mix of ancient ruins and modern buildings, but in a post-apocalyptic world, both the biblical and modern buildings would lie in ruin. So my version of Jerusalem has biblical columns and walls smashed alongside cracked concrete, the rusty hulls of cars, discarded guns and shells…all swarming with warring demons and angels.

I also thought about how Armageddon would have affected the countryside. While it brought humans to near extinction, I show how nature is slowly reclaiming the land. Weeds and wild animals start to spread over places where humans no longer live.

Laila, my main character, is half demon and half angel. She's dark, tortured, vulnerable but deadly. In many ways, she's a Hamlet-like character—intense and melancholy, returning from exile to find a mess at home.

DANIEL ARENSON: If you like dark, paranormal fantasy—demons, angels, fallen angels, and kick-ass hybrids—I think you'll enjoy Flaming Dove. I included lots of action—epic battles, gun fights, sword duals, grenades, Uzis, bombs, chases—to get the testosterone pumping. To offset this, I also included quiet, reflective scenes, and even quite a bit of romance. If you want a story that'll entertain you, but also give you ideas to think about, and a haunting ending, you'll enjoy Flaming Dove.

DANIEL ARENSON: In the late 90s, when I was a teenager, I began writing short stories and poems for small magazines and e-zines. They didn't pay much—the odd $20 here and there. In 2004, I spent a year working as a technical writer. In 2007, I sold my first novel—Firefly Island—to Five Star Publishing, an imprint of Gale.

In April 2010, I chose to embrace ebooks and become an indie author. So far it's been a lot of fun. I've sold a couple thousand ebooks since then, and see my numbers grow every month.

On Christmas 2010, I released my third novel—The Gods of Dream. I'm now working on the fourth.

DANIEL ARENSON: I don't write full time. I have a day job working for a marketing company. It's an awesome job, but doesn't leave me too much time for writing. I try to write in the evenings and weekends, usually with several cups of strong coffee.

DANIEL ARENSON: Roger Zelazny has been a large inspiration for me. I've loved his books, especially the Amber novels, since I was a little one. George R. R. Martin has also been a major inspiration.

While I don't write much science fiction anymore, the old masters of that genre—Asimov, Heinlein, Bester, and many others—are also an inspiration. Those guys were terrific writers who proved you don't have to appease the critics to write enduring, thoughtful literature.

DANIEL ARENSON: I'd love to have written the original Dragonlance books. In many ways, those are perfect books—they offer action, adventure, comedy, magic, and great characters that are appealing to readers of all ages.

DANIEL ARENSON: Timothy Lantz, an esteemed cover artist (look for his work at your local bookshop), created the cover for Flaming Dove.

DANIEL ARENSON: I don't market enough. Mostly I just hang out on KindleBoards.com and Facebook and talk about ebooks—my own, and others. I'll do the occasional interview too, but that's about the extent of it. I largely rely on word-of-mouth. Dear readers—if you've read my books and enjoyed them, please tell your friends!

DANIEL ARENSON: Mostly to keep my prices low. I sold my first novel to a publisher; they sold my novel in hardcover for $26, and I'd earn about $2 per sale. Now my ebooks cost two or three bucks, and I earn the same per sale. I'd rather sell affordable ebooks to many readers (though having that hardcover on my bookshelf looks rather nice, I confess).

DANIEL ARENSON: Don't just upload anything to Kindle. Make sure your book is good enough. Gain experience writing for magazines and getting paid for your work. Workshop, rewrite, revise. I spent a dozen years writing for various places—magazines, e-zines, a software company, a hardcover publisher—before self-publishing on Kindle. During the first couple years, my writing was amateurish. It takes years to get good at this stuff. So wait. Learn. Improve. Only self-publish once you're sure your writing is professional. 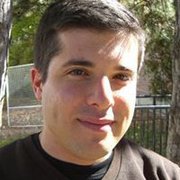 Born in Israel in 1980, Daniel Arenson lived in Manitoba and New Jersey before settling in Toronto, Ontario. He holds a Bachelor's degree in Computer Science and enjoys painting in his spare time.

He sold his first short story in 1998. Since then, dozens of his stories and poems have appeared in various magazines, among them Flesh & Blood, Chizine, and Orson Scott Card's Strong Verse. Firefly Island, first published in hardcover in 2007, is his first novel.