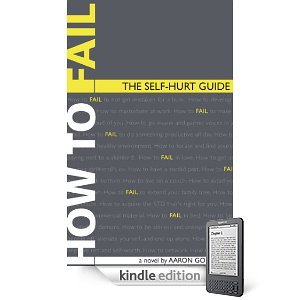 Aaron Goldfarb, author of How to Fail, discusses his book, his journey as a writer, and self-publishing on Kindle.

DAVID WISEHART: What can you tell us about How to Fail?

AARON GOLDFARB: How to Fail is the world's FIRST self-hurt guide, the polar opposite of a self-help guide. It's part satirical novel, part satirical guide, telling the story of thirtysomething New Yorker Stu Fish who we follow through such chapters as "How to Fail to Make Your Parents Proud of You," "How to Fail to Do Something Productive All Day," "How to Fail in Love," and "How to Fail All the Way to Rock Bottom," and even more ribald "footchapters" such as "How to Masturbate at Work," "How to Develop an Addiction," "How to Get Usurped by Your Girlfriend's Ex," and "How to Acquire the STD That's Right for You." There's not an aspect of life that "How to Fail" doesn't tackle and offer a terrific non-solution for!

AARON GOLDFARB: I'd imagined my ideal reader was a non-reader. Or, better put, a person that doesn't read books any more. Us literary folks always lament that no one reads any more, but that's not true, people read more than ever. They're just reading blog posts and websites and tweets, etc, as opposed to physical books. So, I wanted to write something for them. A book delivered in perfect single serving-size chapters for our modern A.D.D. culture. And, it seems to be working! I include my e-mail address (aaron@aarongoldfarb.com) on the last page of the book, and you wouldn't believe how many people write me to tell me stuff like, "Hey man, I haven't read a book in 7 years, but I read How to Fail in 3 days straight!" That feels good. 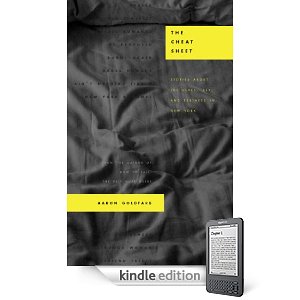 AARON GOLDFARB: Around the same time I realized I would never be a Major League Baseball player, Pulp Fiction came out and I thought, "Ah, screenplays, I want to do this." I attended film school at Syracuse constantly dreaming of a screenwriting career, and my first few years out of college as I lived in New York, I continued cranking out screenplays to mild success. I was getting option deals and tons of meetings and even a little money, but my art wasn't getting on screen and thus the only people ever getting to read it were friends and industry folks. I wanted to make art that people could actually enjoy and I could get feedback on. Thus, about four years ago I started blogging which made me realize I'm pretty good at prose. This led to me revisiting an old idea for the world's first self-hurt guide which lead to my first novel, How to Fail. In retrospect, I realize that perhaps I was always a better prose writer than screenwriter! And I enjoy it a heck of a lot more.

AARON GOLDFARB: I'm not one of those writers that needs everything "just so" before I can get things done. I can write in the morning or at night, I can write on my MacBook or with pen and paper, I can write at home or in a packed bar, I can really write anywhere. Now that is not to say that I'm undisciplined—I am—it's just my 4-5 hours per day of writing are always different. When I need to write, I write. I gain most of my inspiration and brain storming while on long daily jogs, the only time in my life I'm away from electronics and media and actually have a little time alone with my brain.

AARON GOLDFARB: I've always, oddly enough, been inspired to write fiction by non-fiction writers. My two biggest writing idols are Marcus Aurelius (Meditations is my favorite book of all time) and visionary Seth Godin. Other writers of all genres that inspire me for a variety of reasons would include:  Tom Wolfe, Cormac McCarthy, John Steinbeck, John Kennedy Toole, Jonathan Franzen, Tucker Max, Charlie Kaufman, Robert Greene, Richard Dawkins, J.A. Konrath, and countless others.

AARON GOLDFARB: I'm sure everyone says this answer, but A Confederacy of Dunces. God is it genius!

AARON GOLDFARB: As we all know, the publisher isn't going to do your marketing/promotional work for you, and an independent publisher is going to do even do less. I'm modestly big on the Internet already via my blog and social media (Twitter: @aarongoldfarb, Facebook: facebook.com/aarongoldfarbhtf) so that was going to guarantee me some sales, but certainly not a zillion, so I decided to go on an interesting book tour. Dubbed "30 Bars in 30 Days," me, my manager Craig T. Wood, and a woman from the publishing house went up and down the east coast hitting up bars and bringing the book to the people we thought would be most interested in it: drinkers! The kind of people I discussed earlier who are smart, who still read a ton, but who would never dream of being at a book store on a Friday night. Nope, they're at the bar having a good time...and now buying books. The idea was a smashing success and we sold a ton.

AARON GOLDFARB: As a huge advocate of Kindle, as someone who tries not to ever even read "physical" books any more, I was quite dismayed when my publisher revealed that they would not be spending any time or money in producing ebook editions of How to Fail, even though it was in the contract. Well, I could have complained, I suppose I could have tried to scrape some money together to hire someone, but instead I decided to teach myself how to convert my book into the Kindle format. It was frustrating, and tough, but after a solid week of intense Googling, reading Joshua Tallent's excellent book Kindle Formatting cover to cover (in Kindle form, natch), and major trial and error, I had taught myself the modified HTML coding necessary to produce the Kindle version. I'm almost as proud of that as I am of writing the darn thing. One should publish on Kindle because there's no quicker way for an author to present his ideas to a reader and you can eliminate so many unnecessary people and so much unnecessary time from the process.

AARON GOLDFARB: Go for it! (But with a few caveats.) First, just because you can publish anything on Kindle doesn't mean you should. Maybe there's a reason no one else wants to publish your work. So, make certain you have a perfect and flawlessly edited work before you decide to go the Kindle route. To give an example from my own life: I had a short story collection about the sexes, sex, and sexiness in New York called The Cheat Sheet. Well, I didn't feel like wasting time trying to get these short stories published in magazines for a mere $25 a whack or whatever. And, hardly any publishers are publishing short story collections. So, I figured, I know this collection is damn good, I don't feel like going through the effort to get a "real" publisher to publish it, and I don't want it gathering any more dust, so why not self-publish it on Kindle? I formatted it myself and coincided its release with the release of How to Fail! A lot of people like it even better than my novel! 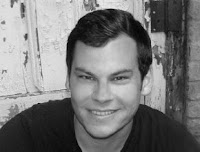 Aaron Goldfarb has written screenplays and stageplays, most notably The Honey Trap. He lives in New York. He thinks authors who try to be funny in their bios are lame. He has a collection of short stories about the sexes, sex, and sexiness in New York called The Cheat Sheet. How to Fail: The Self-Hurt Guide is his first novel.